This season’s emerging talents will confront ugly truths, defy norms and embrace contradictions. Here’s who to look out for.

This season’s emerging talents will confront ugly truths, defy norms and embrace contradictions. Here’s who to look out for.

LONDON, United Kingdom — This season’s London Fashion Week — which begins today — will inevitably be seen through a much wider lens. As British politics descends further into chaos and stasis becomes the nation’s mood music, change of any kind looks ever more attractive. And in a city long famous for fashion designers who like to shake things up, those with fresh perspectives have never been more forthcoming, or the support for them more important.

What London’s new and under-the-radar talent is expected to capture during this seemingly endless period of uncertainty is not entirely clear, but buyers and press need look no further than Gareth Wrighton for a clue.

Take, for example, a wool jumper from his Autumn/Winter 2019 collection that references footage of American soldiers firing at Iraqi journalists and children that Chelsea Manning leaked to Wikileaks, or the floral clusters on a babydoll dress that, up close, reveal themselves to be bouquets featuring cigarettes, plastic and rotting fruit. “I’m obsessed with the dualities and contradictions between things that don’t make sense,” he said. 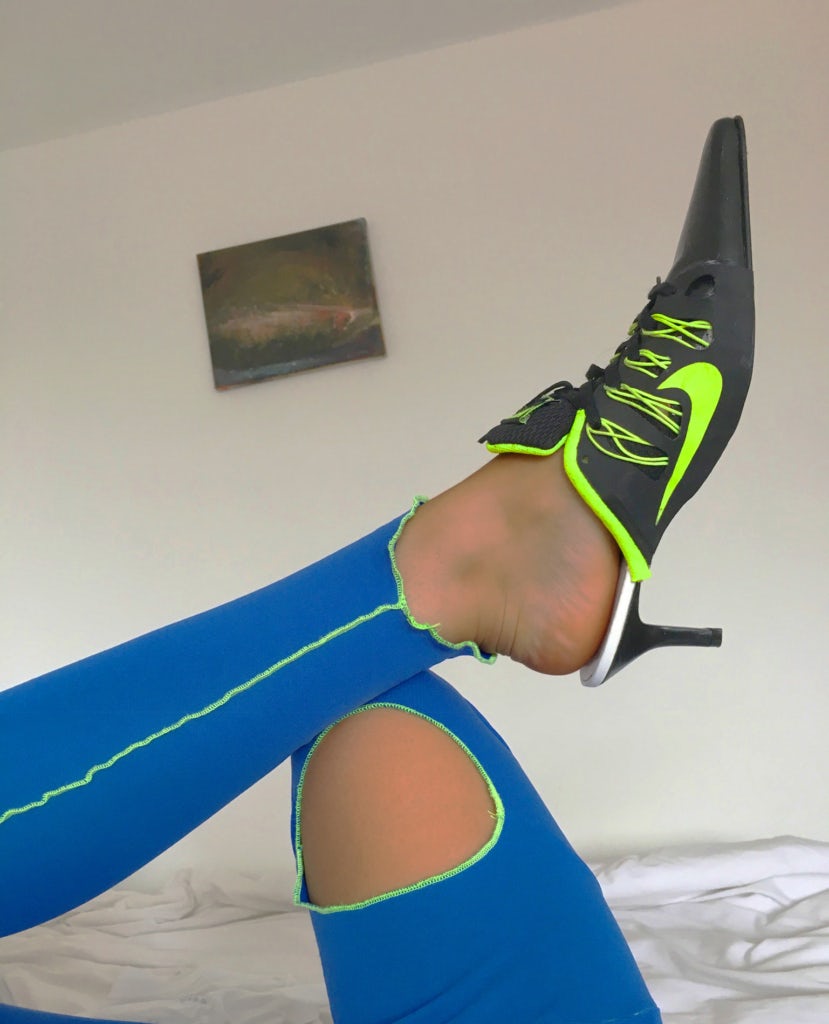 Joining Wrighton at Fashion East will be Ancuta Sarca and Yuhan Wang. Romanian-born Sarca has already made a name for herself by fusing unwanted sneakers with kitten heels, her now signature accessory that has taken Instagram by storm. The day of her fashion week debut (a static presentation meets exhibition) will also mark the launch of Sarca’s exclusive partnership with London-based concept store LN-CC.

Sarca created sneaker-heel hybrids as a solution to a real-life problem: she was moving house and thought it would be a shame to throw out her unworn footwear, which she dubs “readymades.”

“I like the idea of feminising sportswear,” she told BoF. “I want to develop the upcycling idea more... I’ve been doing womenswear for the past couple of years, so I’m not just a shoe designer.”

Meanwhile, two Chinese designers’ collections will centre on the feminine and romantic. BoF China Prize winner Caroline Hu will showcase her latest creations, inspired by her own love story, on September 17. And at Fashion East, Yuhan Wang — whose pieces are stocked at H.Lorenzo and Dover Street Market in the US — will continue to explore femininity through a cross-cultural lens. Inspired by the Chinese film “Peony Pavilion,” Wang’s new collection will combine Eastern elements with Western tailoring, accented by florals, beading and lace.

Wang won’t be the only designer taking stock of cultural intersections. At her first solo runway show on September 16, British Fashion Council Newgen alumnus Supriya Lele will be exploring a personal hybridity between her Indian roots and British upbringing.

“Her sensibility and ways of interpreting her heritage feels really fresh and unusual,” said Rika Magazine’s Fashion Director and stylist Alexandra Carl. “I think she represents true exciting creative talent offering a new perspective to a culture which is such a big part of London, but few of us really know in the fashion scene outside of the glitzy Bollywood style.” 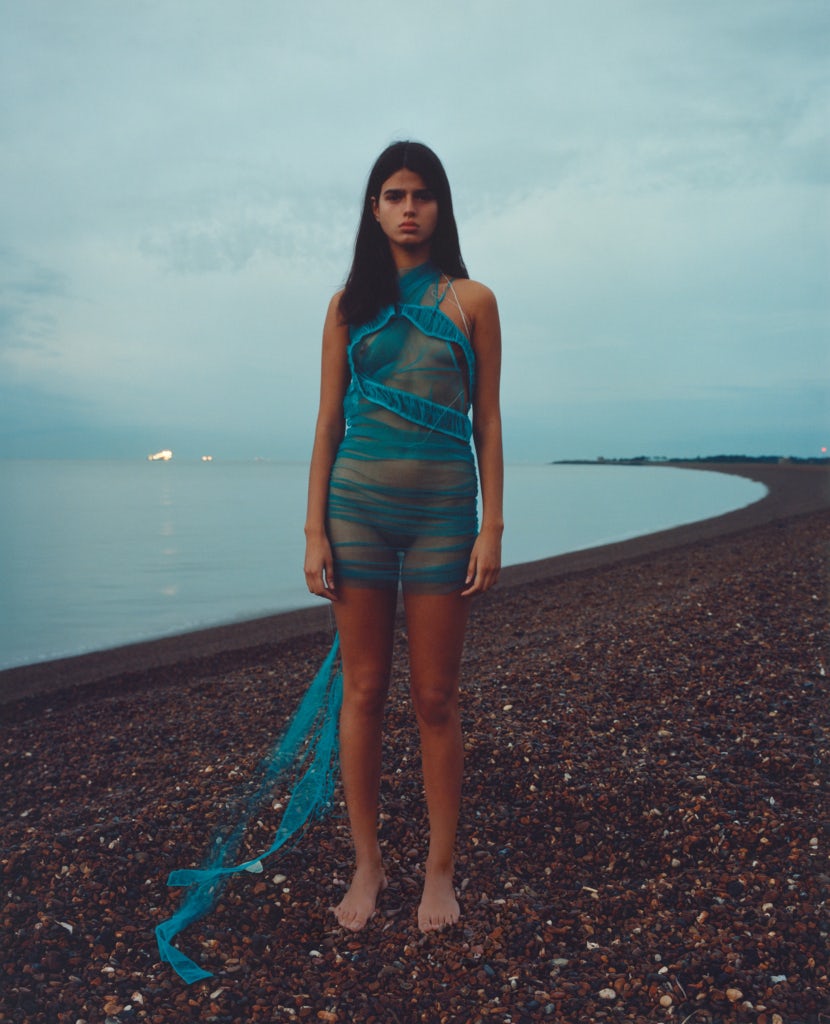 This season, Lele — whose colourful gathered mesh dresses and separates have wooed stockists from Browns to Ssense and Dover Street Market — will take a darker, more abstract turn. “It’s like these skeletons of identity... there’s a lot of ghostly renders of Indian dress and culture, but it’s super modern interpretation,” she said. According to Petersson, Browns' customers are "crazy" about Lele's now-signature use of sheer layering. "I love how she explores and accentuates the female form through her designs."

It’s no surprise that the UK’s current political state has infiltrated the new collection, but its melancholy will be buoyed by a fresh confidence. “It’s all the more important to express that individualism and identity and cultural background of being British-Indian in the public eye,” Lele said. “It feels very important now in such a time of flux. It’s great to feel represented and supported.”

The Brexit thread feels especially poignant considering Albanian Nensi Dojaka — who will be stationed at the Strand’s designer showrooms on September 13 — only confirmed her talent visa over the summer, courtesy of the BFC. “There’s no better place for young designers,” the Saint Martins grad, who studied lingerie and womenswear for her BA and MA respectively, said. “Despite what’s going on, this country is still embracing talent without putting tags on them.”

“We want to make sure that both European and international students keep coming to the UK to study but also that they are able to stay here to work and set up their business,” said BFC Chief Executive Caroline Rush (since 2018, the BFC has served as an independent assessor for visa applications in fashion).

Interestingly, it was announced this week that, from 2020, international students will be allowed to stay in the UK for two years after they graduate, reversing a 2012 decision by Theresa May that sent students packing four months after completing their degrees.

Despite what’s going on, this country is still embracing talent without putting tags on them.

“Our main goal continues to be how to support designer businesses, provide opportunity and engagement, and for London Fashion Week to remain a platform to showcase our country’s creativity and innovation,” Rush added.

Dojaka is one of the more recent beneficiaries of this push. For her MA graduate collection, she fashioned underwear and mini-dresses with geometric patches of neutral tulle, organza and jersey in an intimate nod to the ‘90s. At her fashion week debut, the inspirations, materials and focus on dressmaking will stay, though the designer hopes a new, lighter touch will bring out the vulnerability and strength of her garments and their wearers.

Strength and empowerment will also pervade this season’s dispatches from BFC Fashion Trust beneficiaries Paula Knorr and Marta Jakubowski, albeit in contrasting ways. German-born Knorr will embrace inclusivity with her celebrity-favoured evening wear: her gowns are panelled with jersey for stretch and comfort, and the "High Summer" themed runway (sponsored by and staged at Harvey Nichols for industry insiders and consumers alike on September 13) will reference the designer’s artistic upbringing by invoking florals, batik and tie dye.

The same night, Polish-born Jakubowski — who Browns' Womenswear Buying Director Ida Petersson reckons "should be on everyone's watch list" — will reject seasonal norms. “It’s not that much of a Spring/Summer collection really,” said the designer, whose signature aesthetic is a grown-up elegance. “It’s quite tailoring heavy with quite a lot of drapes.”

And though some emerging designers’ upcoming collections lean towards the bold and conceptual, this season’s Newgen "One to Watch" Eftychia Karamolegkou will opt for subtle and understated luxury.

“Eftychia truly reminds me of what the word [designer] means,” said 1Granary founder Olya Kuryshchuk. “She creates through garment design, rather than image making or world building. She designs with integrity and depth.”

At her presentation on September 13, the Greek designer — shortlisted for this year’s LVMH Prize — will upgrade her namesake brand’s “core silhouette” of a menswear-inspired shirt and trousers with a modern-meets-‘70s office aesthetic (conference table included). Though “The Last Supper” provided a lead-in for the presentation’s storytelling and characters, Karamolegkou didn’t want a narrative to overshadow her garments, which appeal to established career women and will undoubtedly resonate with fashion week’s Philophiles.

“My whole brand aesthetic is about subtle messages... whoever gets them, good,” she said. “I’m not trying to dictate the story — at the end of the day, it’s about the clothes.” 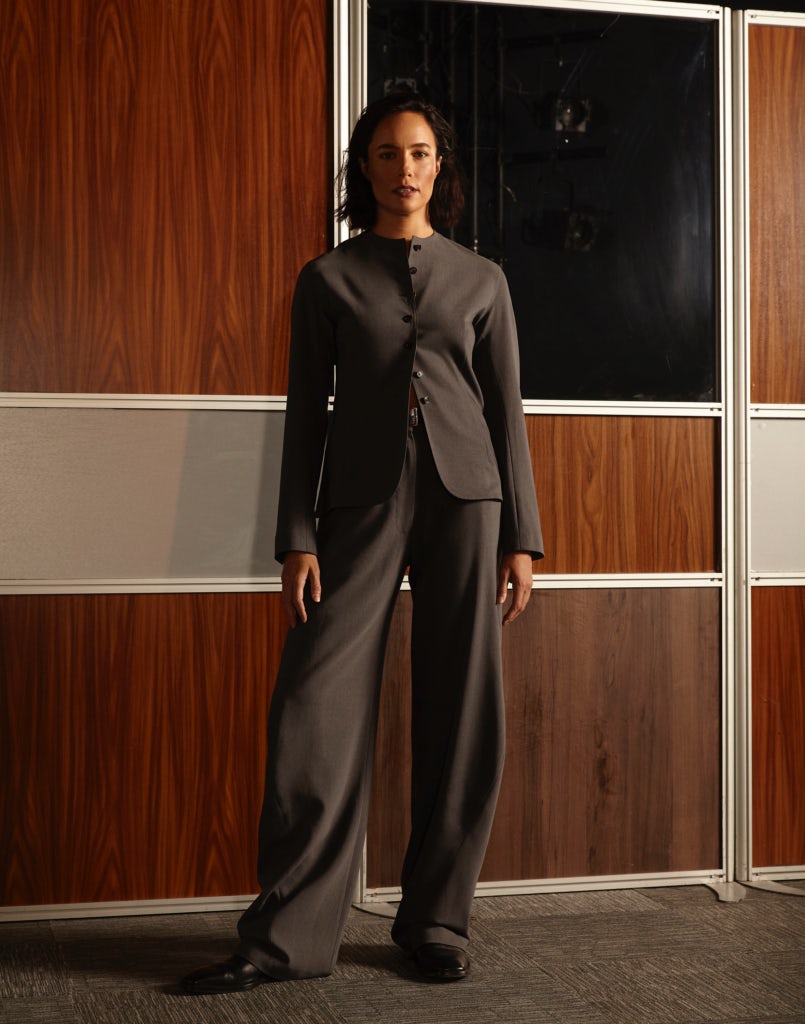 Off the fashion week schedule, showgoers will have other opportunities to support young designers, many of whom don’t have the budgets or financial backing to hold shows or presentations. According to Karelis, must-go events include the book launch of “Fashion Central Saint Martins,” and artist and anti-fast fashion activist Dr Noki’s fashion week residency at the Ace Hotel (where he will customise deadstock Katharine Hamnett T-shirts to raise funds for Trust Judy Blame). Machine-A and ClickerMe will also be championing designers Goom Heo, Sheryn Akiki and Kitty Garratt through a screening and showcase at their The Graduates Project event, slated to take place at Machine-A on September 13.

“Even though LFW is such an important platform for designers to showcase their collections through shows and presentations, it is also a big investment which... can become a huge risk,” Karelis told BoF. “There are always ways to introduce young designers and graduates through events like this, where the investment goes into making beautiful collections and to support their businesses financially.”

While fashion week can boost visibility and credibility for newcomers, Kuryshchuk reckons the industry needs to rethink the follow-through. “London brims with talent in a way no other place does,” she said, noting the city’s history of support systems for young talent.

“I wish the industry would stand by emerging brands for longer periods of time, years even, instead of moving on to something else after each season.”