How Yves Salomon Transformed Its Business with One Coat

Much in thanks to the success of its youthful, fashion-driven Army jacket, the furrier saw record sales in 2015.

How Yves Salomon Transformed Its Business with One Coat

Much in thanks to the success of its youthful, fashion-driven Army jacket, the furrier saw record sales in 2015.

NEW YORK, United States — The Yves Salomon store on Madison Avenue is narrow in dimension, decorated with pale green marble shelving framed in gold. The look is quite contemporary and fairly sparse, something more expected at a downtown boutique than on the ever-traditional Upper East Side. Even less so at a mink-coat proprietor.

But this fur house rejects stodgy clichés. The coats — patch-worked shearlings, bracelet-sleeve chinchillas and magenta minks — aren’t fusty. Instead, they’re more in line with the kind of looks a fashion house might present.

It’s the rack of fur-lined “Army” parkas that command the most attention. The original version — a utilitarian green twill, lined with button-off rabbit fur and a coyote collar, which retails for about $1,950 — hangs alongside a host of new iterations, including hip-length navy nylon, denim lined in white rabbit, multicolour fur lining and cape silhouettes. Yves Salomon's first Army parka was introduced in 2010, inspired by vintage military jackets. “We have more styles in the back,” says general manager Thomas Salomon, the fourth-generation heir to the house, and Yves’ son. “The people in the States know us through the parka.” Based in Paris, Salomon has been charged with the privately-owned company’s international expansion, which includes the opening of its first Manhattan outpost. There are also three stores in Paris, one in Saint Tropez, another in Aspen, and two in Moscow. 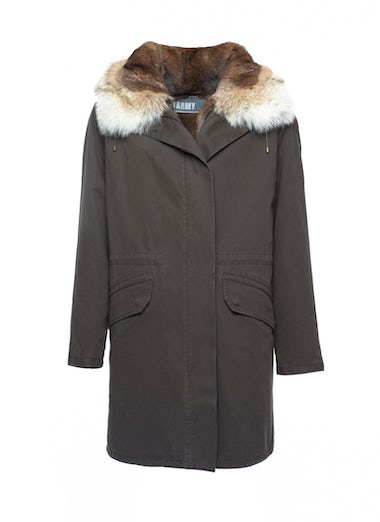 With its standalone stores, Yves Salomon aims to capitalise on its existing momentum in wholesale and capture a larger share of the $40 billion fur market. Once best known for manufacturing coats for other fashion houses, the company has spent the last decade refining its namesake and auxiliary collections. “I said to my dad, either we are working toward building a brand or in a couple of years we will close the company,” says Salomon. “Ten years ago we were 25 people in the company, now we’re almost 150.”

Since joining his father in 2004, Salomon has hired designers from some of the biggest luxury labels in the world to execute his vision of what a modern fur business should look like. In 2015, Yves Salomon’s global turnover was $50 million, up 56 percent from $32 million in 2012, and growing steadily year on year. US sales last year were $4.2 million, up 223 percent from $1.3 million.

Salomon refuses to credit the Army collection outright with the company’s newfound success, as it still makes up only a fraction of its overall sales. Instead, he argues that it’s the company’s fashion-forward approach to fur that has spurred growth. “Things have changed a lot: the shapes, the dying techniques. Now the coats are very light,” he says. “We don’t respect the rationality of the fur business. I think this is why we’ve been succeeding.”

What’s more, because the company buys raw pelts directly from the auction houses, he says it is easier to charge less. “We own the supply chain, from the skins to the retail,” he says. While there are furs in the main collection going for more than $30,000, there are also plenty below $2,000. 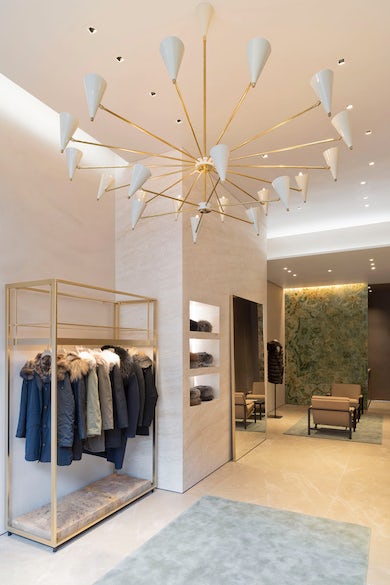 It’s also a transformation that could have been difficult to predict. Originally called La Franco-Anglaise, the company was founded by Gregory Salomon in 1920 as a supplier and trader of pelts for houses like Dior and Revillon. Gregory’s grandson, Yves, began designing coats for the ready-to-wear brands in the 1980s. In 1983, he launched a namesake collection. In 2006, the company acquired famed French fur house Revillon — which is currently dormant — and began to further develop its in-house lines. Today, there are four: A main collection, which includes ready-to-wear as well as men’s and accessories; a more accessibly priced line called Mateo, sold at stores like Bloomingdale’s; 245 Saint Honoré, a high-end range named after the address of its first Paris boutique; and Army, which piqued the interest of Opening Ceremony just a year into its existence and is now sold at retailers including Barneys New York, MatchesFashion.com and Harvey Nichols. Five years ago, only 50 percent of Yves Salomon’s sales came from its own labels. Today, the figure is 80 percent.

But the brand faces challenges ahead. Until now, Salomon has spent much of his efforts working to draw in a younger — or at least more fashion-driven —customer. While he will continue to do so by introducing new products, like fur-accented sneakers under the Army moniker, there are other, less predictable factors at play. This season, the unusually warm weather has caused a slowdown in growth. “Of course the business is down,” he admits, saying the weather has never been more of an issue as it is now.

Other than hoping for a cold January and February, Salomon says his team considers climate issues when they’re designing, creating feather-light coats and limited-edition styles — often only two or three — to add a sense of urgency to the purchase. Sales of ready to wear, which is less reliant on the temperature, are on the up, increasing 10 percent season over season. There are also plans to expand the men’s business.

Looking ahead, Salomon sees the United Kingdom, where the company operates a shop in shop in Harrods, and Korea, as important markets along with France, the United States and Russia. One can’t help but wonder: If the company’s success continues, would he ever consider selling? “For a very good price, yes,” he says with a facetious air. “We are very hands on, my father and I. I would say that we put a lot of our personal effort into it. If we [sold], it would be for a really good reason.”