Zeus + Dione, Rising from the Ashes of the Greek Crisis

ATHENS, Greece — Fourteen years at Deutsche Bank gave Mareva Grabowski a keen sense for business. But the Harvard MBA, who had gone on to found her own an asset management firm, was searching for something more. "I had money in the bank and a secure future. And to a certain extent, I enjoyed my job, but the satisfaction I gained from work was waning. I wanted to give something back." In her native Greece, the economy was crashing. "Life was literally ending,” deadpans Grabowski over the phone from Paris. "Every day another shop would close, there would be a new story of suicide in the papers, people were desperate."

But the sense of despair, palpable on the streets of Athens, was not financial alone. A deeper, existential crisis was bubbling beneath the boarded-up windows and empty cash registers. Generous salaries, secure pensions and a low retirement age had made public sector jobs the most sought after in the country. “This mindset was thrown into disarray when people started getting fired,” says Grabowski. “Everything they believed in no longer existed.”

At the time, Athens was burning and there we were — two women, giving them sketches of our perfect sandal.

Two years later, Grabowski was sitting in the kitchen of Dimitra Kolotoura, the founder of Greek travel and tourism communications company DK Associates, reading a copy of The Economist. The two friends would often meet to discuss how things might be improved. “That day, we were talking about an article I was reading,” recalls Grabowski. “It detailed how skilled craftsmanship in Greece was dying out in the crisis and that struck us both as deeply sad. We decided to take a few trips to see what was still being made out there; and as we both love fashion, apparel seemed like an obvious place to start."

The pair embarked on a year-long quest, dipping in and out of workshops, finding the finest craft-makers in the country and, ultimately, decided to start working with the Conis family, known for their traditional leather sandals. "We must have seemed absolutely insane," laughs Kolotoura. “At the time, they had no customers, Athens was burning and there we were — two women, giving them sketches of our perfect sandal and how we wanted it made.” 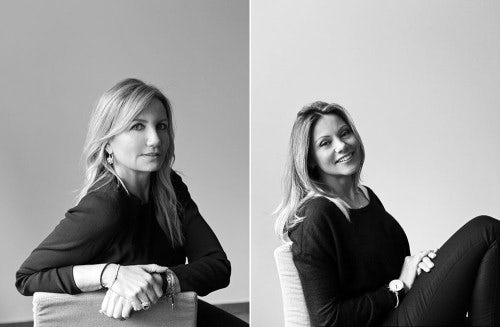 Several prototypes later and Kolotoura and Grabowski were ready to take the plunge. Calling up contacts made through DK Associates, Kolotoura approached the Belvedere Hotel in Mykonos, Elounda Beach Hotel in Crete, and the Amanzoe resort in the Peloponnese and asked them to stock the sandals in their hotel boutiques. Packaged with the story of their provenance, the sandals sold out in two weeks.

“It provided the proof we needed,” says Grabowski. Soon after, lifestyle brand Zeus + Dione, named after the parents of ancient Greek goddess Aphrodite, was officially born with a plan to combine traditional craftsmanship with modern design elements to produce high-quality fashion for export to comparatively cash-rich foreign markets.

The next step was to hire a designer. Greek-born Central Saint Martins graduate Lydia Vousvouni caught Kolotoura's attention. "I loved the simplicity of her portfolio, but she was in London working for Chloé and then Loewe; I thought it might be difficult to get her to come back to Greece and work for a start-up company during an economic crisis, but she was behind us from the beginning.”

At the start, the brand faced challenges getting suppliers to believe they were serious. These were predominantly family-run operations with business methods that had remained unchanged for generations. “Greece is not like Italy,” explains Grabowski. “Generally speaking, craftsmen haven't seen themselves in a global sense, operating in an export-led environment. Trade has always been fairly internal and when the economy failed, small businesses were left in an incredibly vulnerable position.”

Early challenges were to be expected, but ultimately the crisis proved to be something of a perfect platform for the brand, says Kolotoura. While optimising their supply chain right and keeping cash flow stable is a continual, if diminishing struggle, buyers have responded positively to the Zeus + Dione story. “On our first trip to Paris fashion week, we had publicity money can't buy: Greece was on the front page of every national newspaper," recalls Kolotoura, who was once an account manager at advertising agency BBDO Athens. Their story was certainly a unique one and the duo came back from that first trip with five new international stockists spread across Europe and the Middle East.

Most surprisingly, despite the desperate economic situation, they also returned to find several Greek stores were interested in stocking them, including the country's leading department store Attica. “I asked them, are you still selling?” says Kolotoura. “‘Not as we used to,’ was their answer, but they wanted to support what we were doing and that was an enormous boost.”

The line currently has over 20 stockists, including Matchesfashion.com. "I met Mareva last summer in Patmos. We were introduced by fine jewellery designer Ileana Makri whilst on holiday,” says Matchesfashion.com co-founder and co-chief excecutive Ruth Chapman. “I was impressed by her entrepreneurial attitude and the ethos behind the label as well as the level of craftsmanship and thought that went into her designs. The collection is perfect for vacation outfitting, whatever the time of year."

Tunics and shirts made of Soufli silk — sourced from the northeastern Greek city of Soufli — are among the brand's bestsellers. Other signature pieces include the sandals that started it all, “evil eye” jewellery, and embroidered dresses with folkloric influences.

The company, which has thus far been entirely self-funded, has not yet crossed over into profitability, but is set to generate revenues of €500,000 in 2014 and is planning a “road show” targeting potential investors in September, according to Grabowski.

“The long term goal is to build a sustainable future,” says Grabowski. “Greece has always been a really strong aesthetic influence for designers, but there's never been a strong Greek fashion brand to genuinely champion it. We are that brand.”