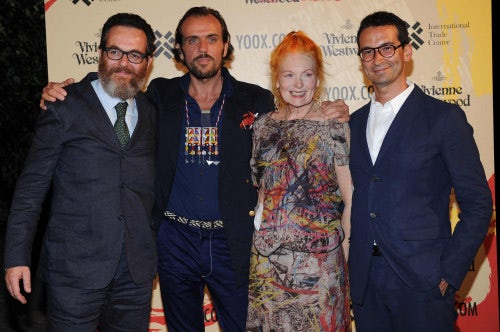 FLORENCE, Italy — Simone Cipriani spearheads the Ethical Fashion initiative of The International Trade Centre (ITC), a joint agency of the United Nations and the World Trade Organisation. Connecting “the world’s most marginalised people to the top of fashion’s value chain for mutual benefit,” it enables communities of artisans and micro-manufacturers — the majority of them women — to thrive in association with the talents of the fashion world by fostering local creativity, enabling female employment, and promoting gender equality in order to reduce extreme poverty, according to a detailed brochure published by the ITC this month.

Of her recent collection with the Ethical Fashion Initiative, unveiled during Pitti Uomo last month and now available on Yoox.com, Vivienne Westwood said "it’s quite incredible to think that we might save the world through fashion.”

But ethical fashion remains a somewhat fuzzy, idealistic concept, which has proven difficult to implement in practice. It also remains a niche market, even if consumers are becoming more conscious about their purchasing habits and sales of ethical fashion are growing. According to Mr. Cipriani, its widespread adoption will require a wholesale mindset shift for the fashion industry, which must eliminate waste from a fashion system that remains bloated with excess product and underpays those at the very early stages of production.

Mr. Cipriani’s official title is typical of bureaucratic nomenclature: Head, Poor Communities & Trade Program, Chief Technical Advisor, Ethical Fashion. But make no mistake, this is no ivory-towered diplomat. Cipriani spends most of his time in the field — the slums of Nairobi and rural communities around Africa — laying the groundwork for ethical fashion at the front lines and building ties to fashion houses in Europe in order to make his vision a reality.

I caught up with Simone Cipriani on a quiet rooftop terrazza during one of his rare visits to his native Florence for the launch of Vivienne Westwood’s Ethical Fashion Africa collection.

SC: I think ethical fashion is being responsible for people and for the planet. For the planet we know sustainability is the word of today, but sustainability is a very vague concept which came out after The Brundtland Report, so it’s a word which has been over used. Now we have to talk about something which is immediately understandable by people. It is about the place where we live, usable also by those who come after us and making it liveable, making it a place worth living in for those who are here today.

If we don’t address this extreme poverty and this exclusion of the path of the human kind in a few years time, the world, and parts of the world [will become] a very dangerous place to live in.

BoF: What does this mean for the fashion industry, and in particular for our culture of consumerism?


This ethic of responsibility is also something that has to be adopted by the fashion industry, because no product can be a product today unless it is responsible. Cars have to be hybrid. If I throw [out] the garbage I have to separate [it]. That is an obligation which is part of our life. If we want to live on this planet, we have to do it. It’s like drinking water, if I want to live I have to drink water otherwise I die. If I want to live on this planet today, in this condition, I have to be responsible in whatever I do, so all the products I produce have to be responsible because products are part of our life. We are a product of our products, we are the product of what we wear and what we produce.

This is ethics. Ethics of responsibility. Responsibility towards the place where we live. It’s only fair.

BoF: But ethical fashion also has to work as a business as well, right? Ethical fashion cannot just be idealistic. It has to be a product that people actually want to buy regardless of how it was made and it has to be commercially viable.

SC: Being responsible means being practical. A fashion product has to be gorgeous [in order to be sold], it has to be beautiful; it has to be within a certain margin or price, and so on. This is the bottom line. But then there is a new bottom line which is also responsible; responsible with a positive story which is how the value is built in the whole value chain.

In the value chain today — from the producer to the customer — the majority of the value lies in the last rings of the value chain, the biggest share of the pie — the retail margin — is there. We produce in Africa then it’s multiplied by 2.5 or 3.5, then it’s multiplied again and again, so $20 here, 20 euros here, becomes 180 there. Come on, justify that. It’s a huge spread. I know it’s justified by the fact that those who buy here have huge overheads and have to cover marketing costs, and the rejects, and then they also have the 40 percent, and the rest goes to outlets.

BoF: But it’s also because they don’t run their business smartly, right? They don’t buy things in a way…

SC: Bravo! Exactly, because of lack of responsibility on their side. In order to be sure that I make it, I don’t run the business in a very smart way, I just put a huge margin and whatever happens, I’m fine. It’s irresponsible, because those people [early in the value chain] cannot get enough to live.

In order for these people to get enough to live — because through this money they change their lives — we need these people to manage their businesses in a proper way, in a responsible way. Responsible also for their companies, because it’s business. If they do that, their margins remain big, always, but they minimise waste, [optimise] investment, allocate resources in a proper way. Why? Because they know that they have to give something back.

BoF: What will it take to get this message understood by fashion companies?

So, it’s about being profitable, otherwise you’re not sustainable and you’re not responsible to your stakeholders, shareholders. It’s about organising and allocating resources in such a way that this profit is also shared with the first stages. This is ethical fashion.

BoF: Who is leading the way in this regard?

SC: There are companies that [are making a good start]. Some companies start because of the inner motivation of the designers, such as Stella McCartney. People who are motivated inside, people who really have a deep, almost spiritual motivation.

But sometimes you deal with companies who do this — big distributors for instance like CO-OP Italia that does huge orders with us. They do it because they see the market changing, and realise if they don’t change their business model, they will remain out of the market. It forces everybody to work better; to maintain the same profit, but to share that in a different way.

BoF: When I walk into certain retailers in the UK or US and I see the prices at which products are being sold and the quality level at which things are being made, I can’t help but wonder, how could this have possibly been made in an ethical way? We’ve talked about smaller businesses, such as Stella McCartney and Vivienne Westwood, but isn’t the hugest potential impact at the mass consumer level, brands like Zara and H&M?

SM: We work with some big brands. We just became a supplier to Walmart, so we are going towards that, but you’re absolutely right.

There are two issues there, one is timing and one is money. Timing is always too squeezed. We develop this sample together now, it’s June, and I want to have the first delivery [in] mid-July. What does [that] mean? How can you think I don’t exploit people to do that, because people have to work over time, it’s impossible. Then at the same time, they say, this is what I pay in China.

But this is changing. First of all the cost of living is changing in China and the age of the cheap garment is finishing, that’s one point. The other point is that consumers are now aware. Yes, the majority of consumers want a t-shirt for $5 and that’s all. But there is a growing segment of of people who are affluent, who are able to pay $8 for that [same t-shirt] if you explain why they pay $8 and where this money is going. The only way is to communicate that to consumers, to enable consumers to see what it is about. If you don’t communicate to consumers it’s a problem and this is a fashion problem.

BoF: It sounds like you’re saying the biggest challenge we face is a mindset problem?

SC: It’s a mindset issue, and it’s all about management. What we are talking about is not a new kind [of management], it’s pure management. Manage your company well, according to what you study in the books. Because the thing is that people don’t do it; when we arrive at a company, we take shortcuts to be more profitable.

BoF: Tell me a bit about how you are trying to address these issues.

SC: Ethical Fashion Africa, the first hub created by the [ITC] to manage its business and support infrastructure in Kenya and Uganda, is completely self sustainable, with a sufficient number of customers from the industry and big distribution. Around EFAL (Ethical Fashion Africa Limited) there is a number of small enterprises and cooperatives, developed thanks to the support of the program. These companies are managed mainly by women and are working with the international market (especially through EFAL) but also on the domestic and regional markets. They include the work of around 7,000 people.

Some groups of micro producers, who are still evolving towards a more stable form of business organisation are still supported by the ITC through EFAL: at least 3,000 more people are involved in them. The communities where these companies operate have become peace and cooperation buffer zones, i.e. zones where peace and cooperation have replaced conflict and all violence and deprivation associated to poverty.

BoF: What would you like to have achieved in 5 years time?

SC: In 5 years time, the program will have expanded its operations also to Ghana, Burkina, Mali and I hope it is able to address the catastrophe of cotton, by creating perspectives of value addition in place. Soon I will provide a business and development perspective for that area of work as well as we shall start developing our business and support infrastructure in Ghana in the months of September 2011.

I think that, by diversifying the products and focusing on the specificities of these new regions (cotton, beautiful prints, natural dyes, weaving techniques, large creative potential) we shall achieve similar results. We have already done feasibility studies but now we have to start working.

In The Long View, BoF speaks to leading thinkers about their forward-looking visions for the fashion industry