A Happy New Year for Luxury

LONDON, United Kingdom — The Savigny Luxury index (“SLI”) rose for the fourth consecutive month in January, gaining almost 4 percent, whilst the MSCI World Index (“MSCI”) was flat. Optimism has returned to the sector with broker forecasts for growth being corrected upwards for the first time in years, backed by a string of strong results announcements and boosted by one of the largest corporate deals in the sector’s history.

Between China’s government-backed consumer recovery, Trump’s promise of lower taxes on the wealthy and Middle Eastern and Russian economies boosted by higher oil prices, 2017 is looking a lot rosier for luxury goods than it has been for a while. For the first time in a year, global tourist spending grew worldwide in December 2016, driven by a strong rebound in France, continued growth in the UK and an increase in Japan. The Swiss watch sector chimed in too, expressing optimism over its two main markets, China and the USA. Overall the feel good factor has returned to the luxury industry: Exane BNP Paribas estimates that sector sales could go up by as much as 5 percent in the first half of the year.

Results announcements this month were by and large positive, with LVMH setting the tone by announcing record-breaking revenues and profits for 2016, thanks to strong sales in the USA and Europe and a pick-up in demand in Asia. Richemont, Burberry, Brunello Cucinelli and Ferragamo also pointed to improving trading conditions in Asia. Only Tod’s and Tiffany came out with disappointing results, as the former still struggled to find growth and the later suffered from disappointing holiday sales and a drop in traffic to its New York flagship, in part owing to increased security measures at the neighbouring Trump tower.

If 2016 was the year of management upheaval at Kering, 2017 is shaping up to be the year of management change at Richemont: four brand chiefs are to be replaced this year (at Dunhill, Vacheron Constantin, Jaeger-LeCoultre and Piaget), whilst celebrated designer Clare Waight Keller left her position as creative director of Chloé at the end of January.

In corporate activity, eyewear dominated headlines with the sector’s biggest deal ever being signed this month: the €46 billion ($49 billion) merger between Luxottica and Essilor. Luxottica will own 51 percent of the merged entity with founder Del Vecchio owning between 31 and 38 percent of the merged group, which will have sales of over €15 billion ($16 billion). Staying in eyewear, LVMH is reportedly close — and this has not been denied by the luxury industry’s juggernaut — to buying a 10 percent stake in Marcolin and create a dedicated hub for its eyewear licenses, echoing Kering’s move of two years ago to internalise its licensed eyewear business.

The eyewear sector is undergoing massive change. Kering brought its eyewear operations in house at the end of 2014 and it looks like LVMH may be moving that way too. Luxottica’s deal with Essilor was a monster waiting to happen — it had been talked about for years; yet was only brought to life when Mr. Del Vecchio made the decision to invest in a lens factory; this prompted Essilor into decisive action. On paper it could not be more complementary (lenses meets frames and distribution), yet it will certainly take time for two very distinct cultures to merge and find the right balance. No doubt top managers of both groups are already vying to find their rightful place in a game of corporate musical chairs. The combined entity will dominate the industry and seems well positioned to continue harnessing the eyewear sector’s growth, helped by an ageing population and increased awareness about eye care, although neither group has so far managed to find online success. 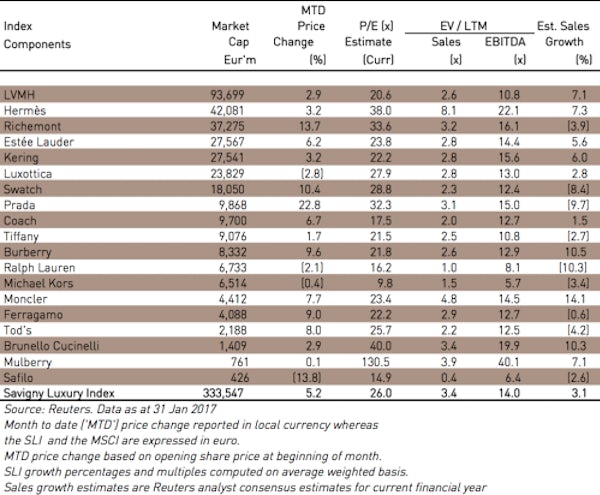