CEO Jacopo Venturini and designer Pierpaolo Piccioli are working to transform the Roman brand from the inside-out, reinvigorating the company’s internal culture as well as its commercial offering. 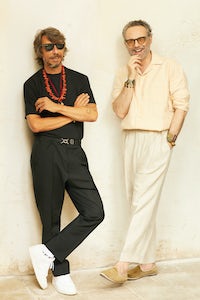 CEO Jacopo Venturini and designer Pierpaolo Piccioli are working to transform the Roman brand from the inside-out, reinvigorating the company’s internal culture as well as its commercial offering.

Can a luxury brand change from the inside out? Jacopo Venturini, Valentino’s chief executive officer since June 2020, is betting on it.

In a sector where designer “musical chairs” and radical aesthetic rebrandings have become commonplace, Venturini — who has returned to work at the Roman brand for the third time after a knockout stint as Gucci’s merchandising mastermind — is working to reignite sales momentum not simply by re-animating signifiers like the brand’s emblematic “rock stud,” but through a deeper overhaul of the company’s internal culture.

Alongside Pierpaolo Piccioli, the brand’s sole creative director since 2016 and a 20-year veteran of the house, Venturini is aiming to reinforce Valentino’s positioning as “the most established Italian maison de couture” — defined not as a silhouette or signature pattern, but as a set of values.

“You have to create a culture where humans and creativity are at the centre,” Venturini said, seated alongside Piccioli in Valentino’s plush Place Vendôme salon, which serves as a key base for preparing the brand’s Paris Fashion Week shows, as well as a hub for its haute couture operations. “If we establish this kind of couture culture, there’s an effect that trickles down through the company.”

Venturini says he wants everyone in the company to start thinking with a couture mindset, treating colleagues like VIP clients and applying creativity and careful attention to every element of their jobs. In the stores, he’s training salespeople to be better prepared to sell across categories, so that they can stay by clients’ sides and help them assemble their own “made-to-measure” looks. “Any job can be done in a creative way,” he said.

But leaning into couture isn’t just about pampering clients and awakening hidden talents within Valentino’s organisation. It’s also about playing to the house’s greatest strengths: haute couture and red carpet dressing remain the most impactful elements of the Valentino brand, which has won high praise for its runway outings and striking looks for blue-chip celebrity clients.

Piccioli is one of the most respected designers working in couture today, putting out collections that have driven the fashion conversation with their extravagant volumes, bold palette and dreamy, glamorous mood. His casting choices have also pushed the industry forward on diversity, long-neglected in the traditional couture world. 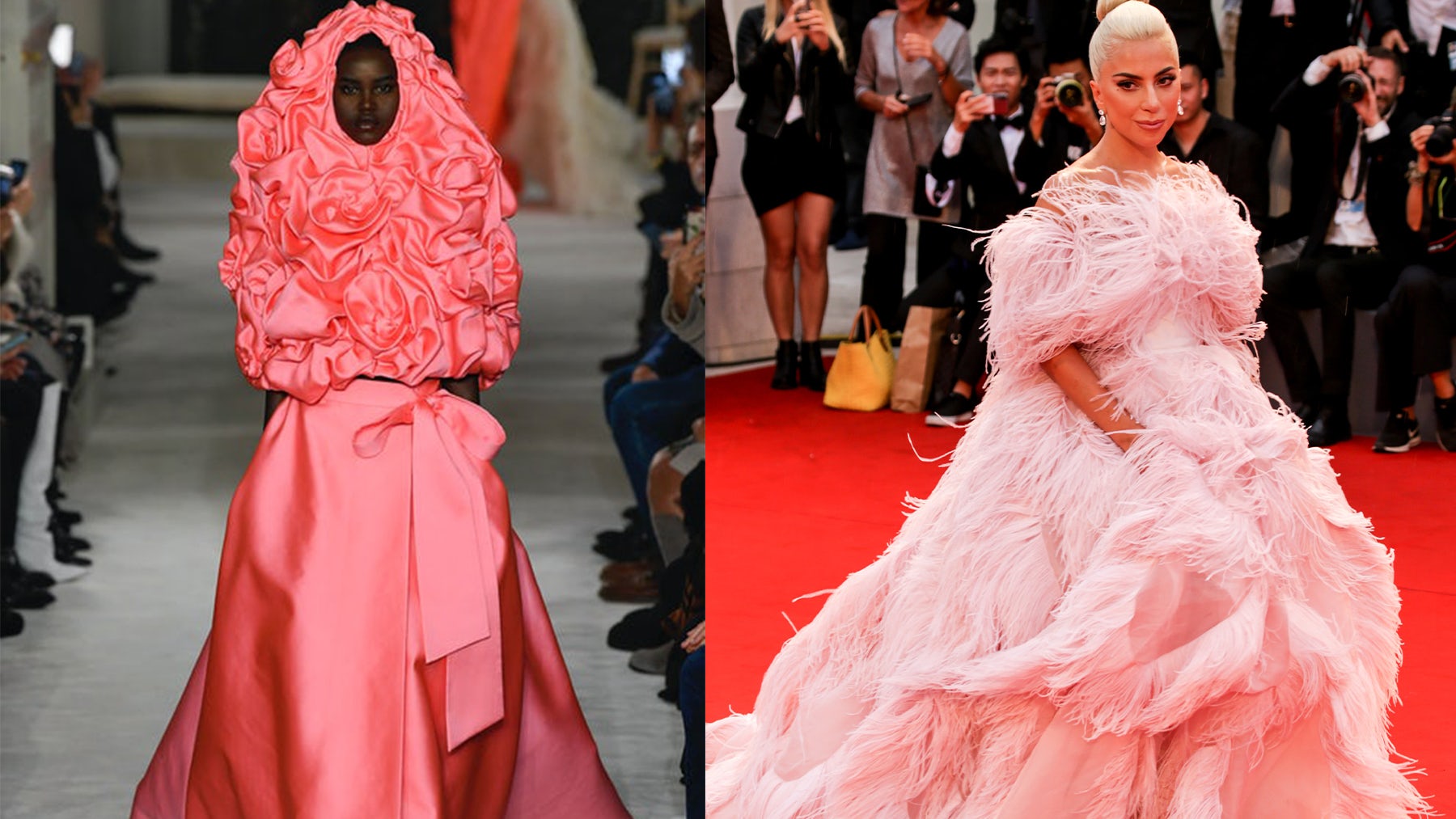 In recent years, red-carpet moments like Lady Gaga’s ostrich feather gown for the Venice premiere of “A Star Is Born” or her periwinkle frock for the Golden Globes pushed awareness of Valentino to new heights. And a new licensing partner L’Oréal, which launched its first Valentino makeup and perfume products in the past year, is bringing added marketing muscle to the brand, keeping Valentino in the spotlight.

But the desirability of the brand’s commercial items hasn’t kept up with its red carpet and couture successes. Interest in the “rock stud,” which drove the business for over a decade, has gradually cooled. While subsequent commercial pushes like “VLTN” streetwear and low-top sneakers had their moments of glory, neither line has captured the broad appeal and staying power of the studs, which tapped into a vibrant commercial niche of women who wanted to be both a little bit rock and a little bit bourgeois.

As the luxury industry became increasingly focused on casualwear, Valentino retained its prestigious reputation for occasion wear, doing big business in upright, ladylike cocktail dresses and high-heeled shoes. Those are categories that have been hard hit by the pandemic, ratcheting up the pressure for Valentino to update its business model. Sales fell 27 percent last year, slightly worse than the industry’s average drop of 23 percent, according to consultancy Bain.

So while Venturini works to make Valentino’s couture approach trickle through the company’s culture, he and Piccioli also need to make quick changes to the brand’s product lineup. “It’s about announcing the creativity, but in a way that better meets the needs of the market,“ Venturini said.

In the past year, the brand has moved to re-energize its family of rock stud products — building out the line with an oversized, more youthful “Roman” stud variation, marketed by actress and singer Zendaya — as well as pushing a line of belts and bags with chunky V-logo hardware.

For the brand’s Fall/Winter collection currently in stores, Venturini encouraged Piccioli to focus more on separates and daywear, with more easy pieces for clients to mix and match, and fewer rigid cocktail dresses. 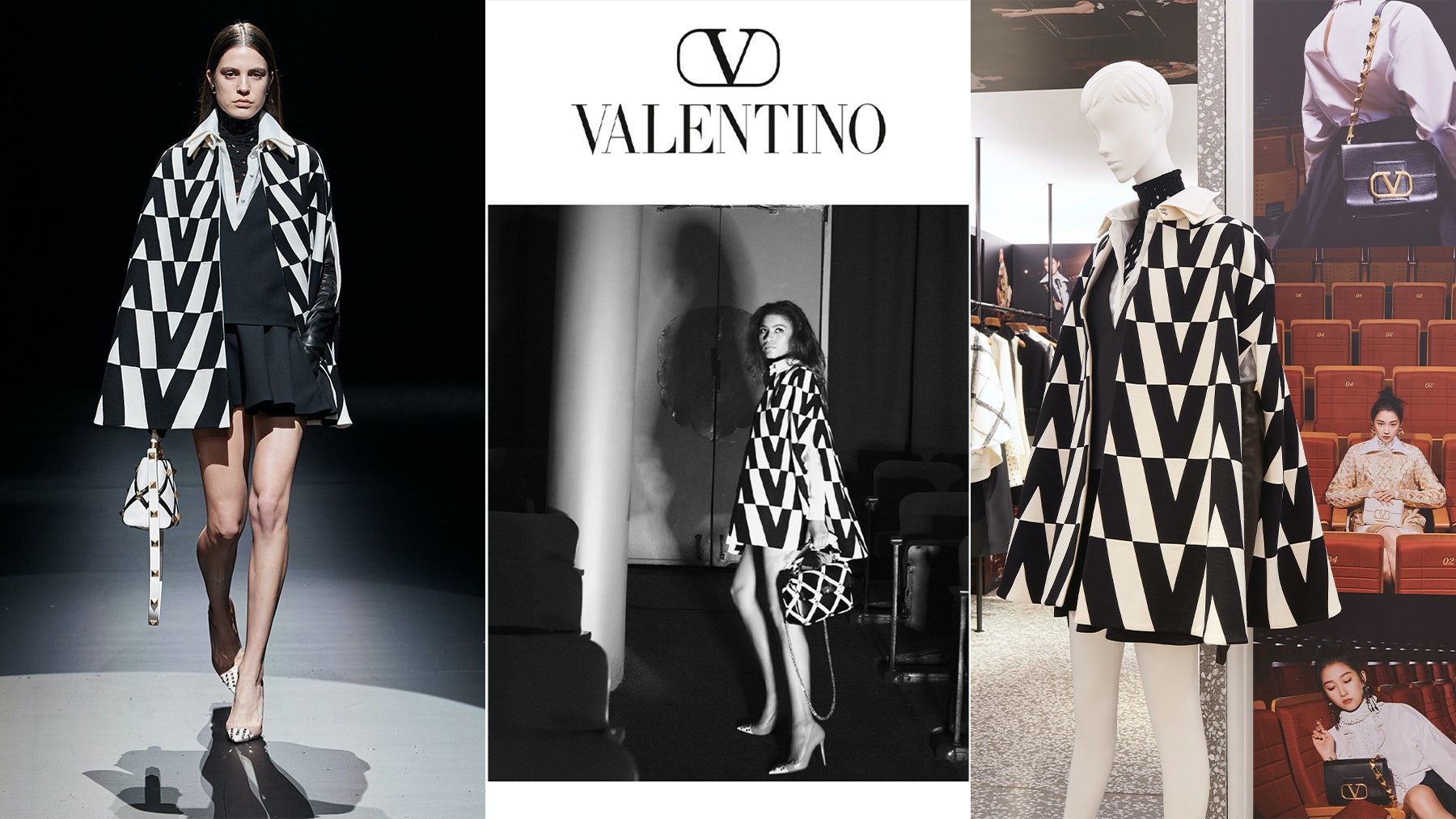 At a walk-through of the brand’s Rome flagship in September, Venturini pointed out slick boots, big sweaters decorated with ostrich feathers and silk shirt-jackets that were a faithful representation of Piccioli’s chic runways but could still serve as go-to pieces for an elevated casual look. The vibe in the store still felt decidedly dressy, but the items themselves are “much more relaxed than in the past,” Venturini assured me.

Sales have bounced back to pre-pandemic levels, aided by the changes. In the first half of 2021, revenue jumped 64 percent year-on-year, to €574 million.

Retailers see the progress, too. “We can see that they’re injecting a lot of younger elements, with the flats, sandals, oversized shirt dresses and shorter hemline,” said Tiffany Hsu, buying director at MyTheresa. The fun prints, “sharp price point” and lounge-wear inspiration in recent resort pieces are areas the company could further explore. “They have to keep a level of sophistication that’s true to the brand, while still becoming more relaxed to align with customers’ lifestyle today,” added Hsu.

Products aren’t the brand’s only challenge. Competing in the couture arena will also require cleaning up Valentino’s second lines and distribution. The brand plans to phase out its less expensive “Red” sub-brand by 2023 and reduce the share of wholesale from 45 to 30 percent over the next five years. “It’s a journey,” Venturini said of the ongoing effort to reposition the brand. “It’s not something that happens in a day.” 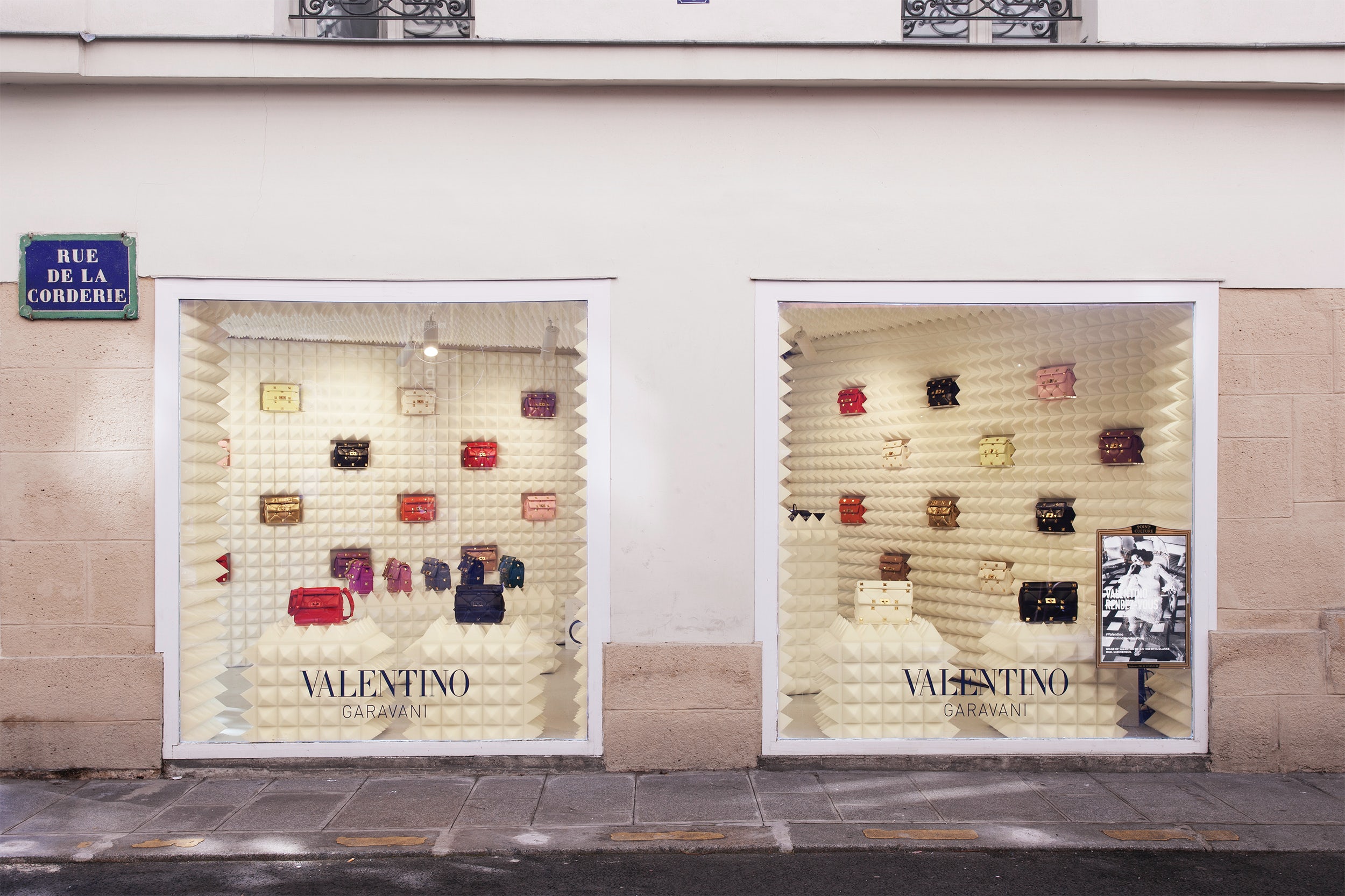 Valentino’s image also needs a lift. Rivals like Chanel and LVMH’s Dior justify their top-end prices (with which Valentino’s $1,200 boots and $5,000 cocktail dresses are broadly aligned) by deploying massive investments in communication and marketing. While Valentino’s red carpet remains highly desirable, the rock stud and VLTN signatures have often been equally visible or louder manifestations of the label, creating a fragmented brand image.

“Pierpaolo achieved things that are really strong — there’s no question that he’s considered as one of the great designers today. But there’s not an overall coherent message” said Ezra Petronio, the art director and founder of Self-Service magazine. “That specificity we see on the runway needs to expand through all ranges of products and communications.”

As such, the brand is currently working to “resignify” — pushing signature items in ad campaigns and staging major activations in locations like Shanghai and Beijing — in order to raise awareness of the brand’s codes in their current manifestation.

The effort is a challenge for Piccioli who, like Venturini, prefers inside-out solutions and seems loathe to put the brand he leads in a box.

“There isn’t a woman or a man who represents Valentino today, it’s more about a way of being, values that people stand for they can share with us,” Piccioli said. “I never think of Valentino as one print, one flower, one detail from a collection.” 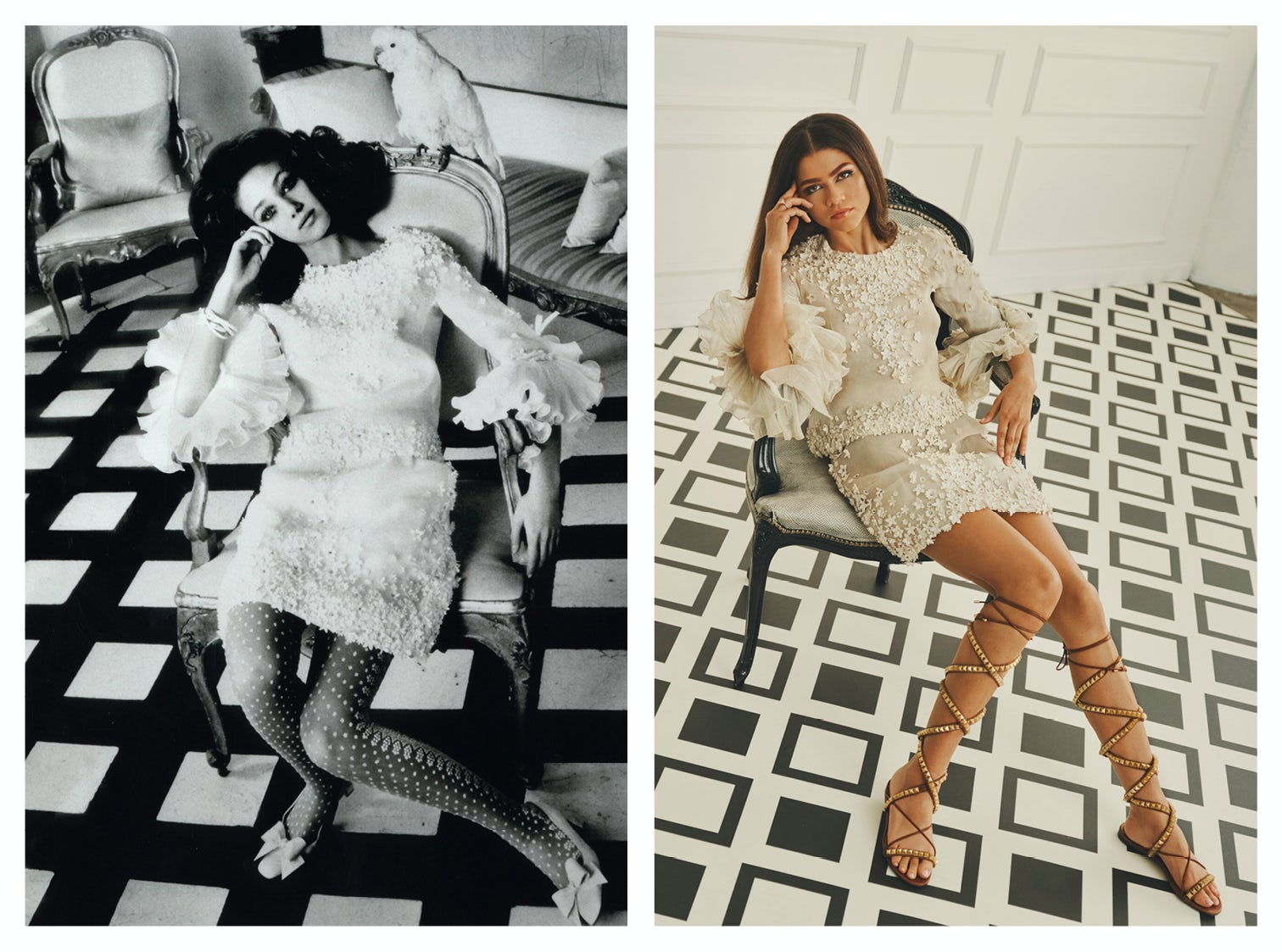 Still, Piccioli is no stranger to the needs of the market. He’s reincorporated the rock stud and its updated Roman stud version into shows, as well as “Vlogo” belts and accessories. And the silhouette in recent collections has more directly referenced the brand’s founding aesthetic, which mixed streamlined ‘60s cuts with unabashedly feminine signatures.

His Paris show Friday will be a new step in “resignifying” the brand’s couture heritage. The collection will include a capsule of revived archival pieces: looks previously worn by famous faces of the brand and reissued for next season (modelled by Zendaya, of course).

“It’s interesting how the codes of the past can be exactly the same, but completely different when they’re worn by different humans in a different way,” Piccioli said.

The Resignification of Valentino