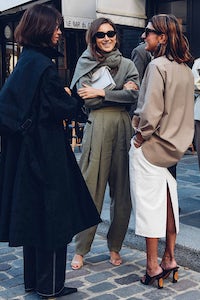 It was late afternoon, Friday’s gorgeous light fading into the sky, marking not only the end of the day, but the end of an era. Just a few hours later, designer Hedi Slimane would debut his first collection as creative director of the LVMH-owned fashion house Celine, which, for the past 10 years, had been occupied by designer Phoebe Philo, known as well by real women for making a great-fitting pair of trousers as she was by fashion insiders for creating agenda-setting designs that inspired the rest of the industry.

Lundin, an influencer whose past-shoulder-length, dishwater blonde hair was cut similarly to the way Philo wore hers for much of the past decade, was dressed in head-to-toe-Céline — from sunglasses down to her shoes — as were many of the women gathered around her, including brand consultant Ramya Giangola, T magazine China fashion director Jo Jo Qian, Saks Fifth Avenue buyer Yumi Shin and Attico designer Giorgia Tordini.

Lundin and Giangola met one year ago in Paris, while they were trying on the same dress at a Céline store. Along with their friend, the photographer Tommy Ton, they called for a last hoorah of sorts in celebration of Philo’s work. 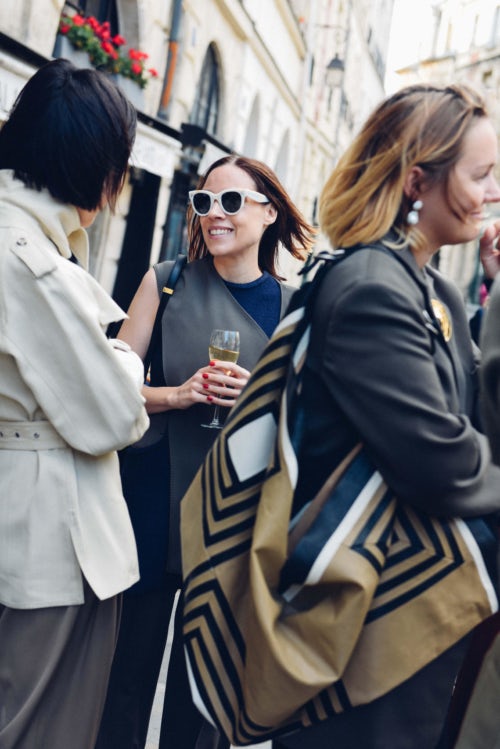 A handful of women, most of whom work in the industry but were also personal fans, made the trek. Farfetch’s Yasmin Sewell, Financial Times fashion editor Jo Ellison, model Daniela Kocianova and jewellery designer Gaia Repossi were also in attendance.

The dress code? “Strictly Céline, not Celine,” read the invite, laid out in a typeface not unlike the one embossed on the label of the sage-green, broad-shouldered blazer stylists Yana McKillop and Natasha Goldenberg were both wearing.

Sipping champagne outside La Bar Du Caveau, the women compared outfits — as well as shopping lists — while speculating about Slimane’s upcoming debut. “People always say, ‘Hedi only does Hedi,’” Lundin said. “But I understand the choice. I don’t think it would have been right to get a Phoebe imitator.”

“Can you imagine any of us for 10 years in the same position?” asked Irina Lakicevic, a former dentist-turned-influencer and street style star. (Her look: Spring 2018 jacket, Vetements jeans.) “We’d be like, ‘Come on, what am I doing with my life?’”

“Can I get a selfie with you?” Varvara Protasova, the 16-year-old daughter of one of the Philophiles asked the photographer, best known for his work shooting street style outside of the shows. Dressed in her mother’s moleskin suit from the Winter 2018 collection — Philo preferred to call it that over “fall” or “Autumn/Winter” — the girl, who was on her first-ever trip to Paris, confessed that she didn’t wear Céline very much.

“These clothes are for adult people, not for teenagers,” she said, her look finished off with a pair of Margiela Tabi boots. “But it’s really nice and beautiful for special events and moments.” She said didn’t know anything about Hedi Slimane and had no opinion regarding his appointment.

On the other hand, her mother, Oksana Ponomareva, had booked this four-day trip primarily to join the gathering. They flew all the way from Moscow. She was wearing this season’s washed black trench. “I have that on hold at the store,” Giangola said.

Besides talk of Philo and Slimane, they chattered on about holidays and private schools and work. Many of them had become friends through Instagram, commenting on each other’s posts and following Céline tribute accounts. 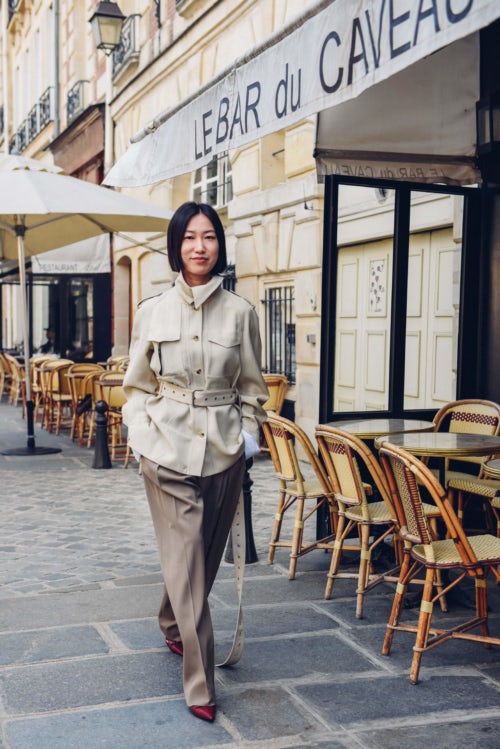 Philo’s power, Giangola observed, was in the community she attracted. “It was a woman designing for women who had a similar point of view, family, intellect and career,” she said. “It was so much more than just the clothes. This is a snapshot of time that I don’t think can be reproduced.”

“Did you go to the re-see last season?” Lakicevic added. “It was like a funeral wake.”

As the air chilled, perhaps in anticipation of that evening’s debut, they contemplated which designers may begin to fill the void left by Philo. Earlier in the day, Jonathan Anderson had put a good show on at Loewe, and in New York, The Row’s sumptuous minimalism stole hearts. Hermès, too, is finding its footing under Nadège Vanhee-Cybulski. Many suggested Dries Van Noten, whose sensational show on Wednesday left them craving more. (It just so happened that Van Noten’s Left Bank-shop was only a six-minute walk away from their current location, and quite busy when this reporter stopped in afterward.)

But were they open to Slimane’s Celine? Some looked forward to seeing it, others had no intentions of stepping a foot near Les Invalides that night. (Many were not invited.)

“You can love Phoebe’s Céline and love Hedi’s, too,” said an indiscernible voice in the crowd.

“We were lucky to own pieces designed by Phoebe,” Lundin said.

One thing’s for sure: Philo’s absence will be felt, not only on the runway, but on the streets. “I’ll miss seeing this,” Ton said.