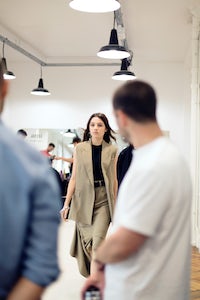 PARIS, France — Ami, the menswear line by Alexandre Mattiussi, is launching womenswear as a category for its Spring/Summer 2020 collection with a co-ed show on Tuesday.

The upcoming show will feature 20 looks each for men’s and women’s, with the same affordable price points and clean aesthetic of a well-designed Parisian “uniform” that Ami is known for in the men’s circles. Rather than showing during the women’s season, both collections are set to be shown side by side, with the Autumn/Winter 2019 capsule already counting Matches Fashion and Liberty London as stockists.

Mattiussi began his 15-year career at Dior Homme, Marc Jacobs and Givenchy – where he co-led the menswear design team until the arrival of Riccardo Tisci — and founded Ami in 2011. He had noticed a lot of women buying the label’s men’s pieces for themselves, attracted to the clean and masculine silhouettes of the collection that created an oversized boyfriend-style fit. The label’s female clients included actress Charlotte Le Bon, Caroline de Maigret and Charlotte Casiraghi. 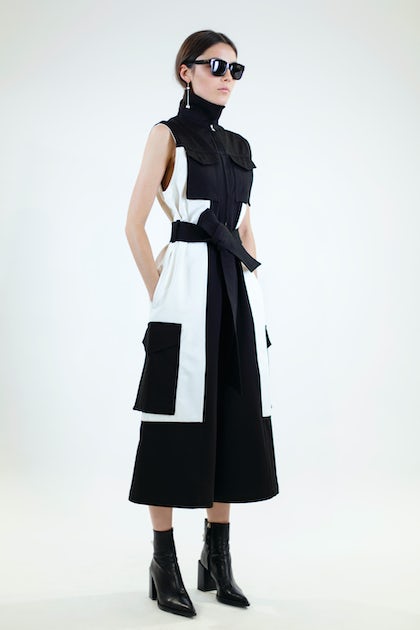 “When I saw this, I said let’s keep the basis of menswear and try to grow things organically [through] the L’Homme Pour Femme collection,” Mattiussi told BoF. The capsule, launched in 2018, included 70 to 80 of Ami’s most iconic pieces, including camel coats and pantsuit trousers, in sizes and silhouettes targeted for women, and was sold exclusively in the brand’s Saint-Germain store in Paris. The Autumn/Winter 2019 collection's distribution expanded to include Matches Fashion and Liberty London.

“We wanted to test it with our Parisian clients, like a laboratory of sorts,” said chief executive Nicolas Santi-Weil. After seeing the number of items sold out in the first days after launch, he understood the natural step. “We first wanted to make sure the roots of our menswear collection were deeply embedded enough before truly launching womenswear,” he said.

Creating menswear-inspired pieces for women marked a turn for the label, which had previously cast female models to walk alongside male models in shows, dressed in smaller sizes of menswear. The brand declined to disclose figures, but year-on-year sales in 2019 for the main collection grew by 40 percent.

Mattiussi maintains Ami will always remain a menswear brand. “I don’t want to disappoint my men’s customers, they’re very loyal,” he said. “They like that Ami is a men’s brand, they’re very protective over it.” Yet womenswear has allowed him to explore design with more freedom, he said, as opposed to menswear, which is a “precise process, led by the commercial side.”

I’ve had a woman in mind for years, and this collection will show precisely the direction I want to take her in.

For Spring/Summer 2020 Mattiussi’s design process began with womenswear, which then inspired the men’s collection, as opposed to his usual menswear-led approach.

Ami has boutiques in Paris, Tokyo, London, Hong Kong, Beijing and Chengdu as well as over 380 points of sale worldwide. While it kept distribution of the capsule collection tight, it has expanded the amount of wholesalers for the upcoming autumn season, counting with Matches Fashion, Liberty and Le Bon Marché as stockists.

“There are big expectations,” said Mattiussi. “Strategically and commercially there’s a big opportunity to grow with this collection. I’ve had a woman in mind for years, and this collection will show precisely the direction I want to take her in.”

The Making of Ami with Alexandre Mattiussi