Amiri Takes on the Luxury Establishment

Boosted by its recent growth and a minority investment from Renzo Rosso’s OTB, Mike Amiri’s namesake luxury label is scaling on his own terms. 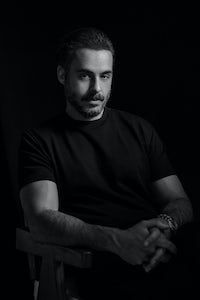 Amiri Takes on the Luxury Establishment

Boosted by its recent growth and a minority investment from Renzo Rosso’s OTB, Mike Amiri’s namesake luxury label is scaling on his own terms.

“That time an independent designer went from starting in a basement to taking an Hermès store 8 years later,” he wrote on Instagram this spring, after sharing a video where he showed his family an Hermès store inside a Las Vegas casino that was about to become his namesake brand’s second brick-and-mortar location.

“Bye Hermes,” his young son chimed in, pronouncing the brand in a way that rhymes with “germs.”

Amiri has set his sights on building a business that can rival the European luxury heavyweights that will soon be his neighbours at the casino. After opening his first store last autumn on Rodeo Drive in Los Angeles, he has two more in the works this year, in New York’s Soho neighbourhood and Miami, with plans to hit Europe, China and Japan next year. It’s a retail network worthy of a category-spanning luxury brand, complete with interiors heavy on geometric marble fixtures, angular designer chairs and commissioned paintings from Wes Lang.

It’s an ambitious undertaking for a designer who self-funded and launched his label just seven years ago as a casual luxury brand in an industry dominated by formal attire. Instead of building his brand around derby shoes or neckties, Amiri cultivated a type of customer that wants to see and be seen wearing his hand-distressed jeans that retail for well over $1,000. The denim earned him a swath of celebrity fans, including Meek Mill and the late Pop Smoke, who dropped his name in lyrics. Influential wholesalers, including Barneys New York, picked up the brand. In 2018, he started presenting his collections at Paris Fashion Week Men’s to boost the luxury credibility of the California-cool reputation he had carefully developed for his crafted vintage pieces. Sales topped $40 million that year.

Still, he lacked the resources of Dior or Gucci, which with their billions of dollars in annual sales, and the backing of their luxury conglomerate owners, could out-negotiate smaller rivals for prime retail spaces and design talent. That changed in 2019, when Renzo Rosso’s OTB took a minority investment in the brand, adding it to a portfolio that includes Margiela, Marni and Diesel.

The investment added rocket fuel to Amiri’s steady growth trajectory. The brand projects $150 million in revenue in 2021, up from $60 million this year, and expects to cross $230 million in 2022. That would put Amiri roughly in the same league as the likes of Missoni and Etro, both originally multi-generational family-controlled brands.

“There are very few designers, American designers, who are more referenced in the cultural zeitgeist right now,” said Josh Peskowitz, the retailer and buyer who is now an operating partner at private equity firm The Untitled Group. “His product sells out, and we’re talking about really high-ticket items.”

Despite the ambitious projections, Amiri insists the brand is free to set its own pace. As both the brand’s chief executive and creative director, he describes his strategy as one of responsible growth, mixing European-style craftsmanship with an American streetwear-influenced focus on keeping the brand limited in release and access. That balance is reflected in his now 75-person team, which includes a number of senior leaders Amiri lured to Los Angeles from luxury houses like Chloé and Saint Laurent.

Amiri’s growth plan requires nailing the tricky balancing act of evolving and expanding his business while staying true to the brand identity he has spent almost a decade building.

In recent years, the designer said he cut back on the production of jeans to avoid becoming too reliant on the category. Footwear, like chunky sneakers covered in leather appliques reminiscent of the bones of the feet, now represent more than 15 percent of sales, and other growing categories include knitwear and tailoring. The shift reflects how the brand’s style has evolved, too, from skinny jeans and boots to silk shirts and oversized cashmere sweaters and cardigans. 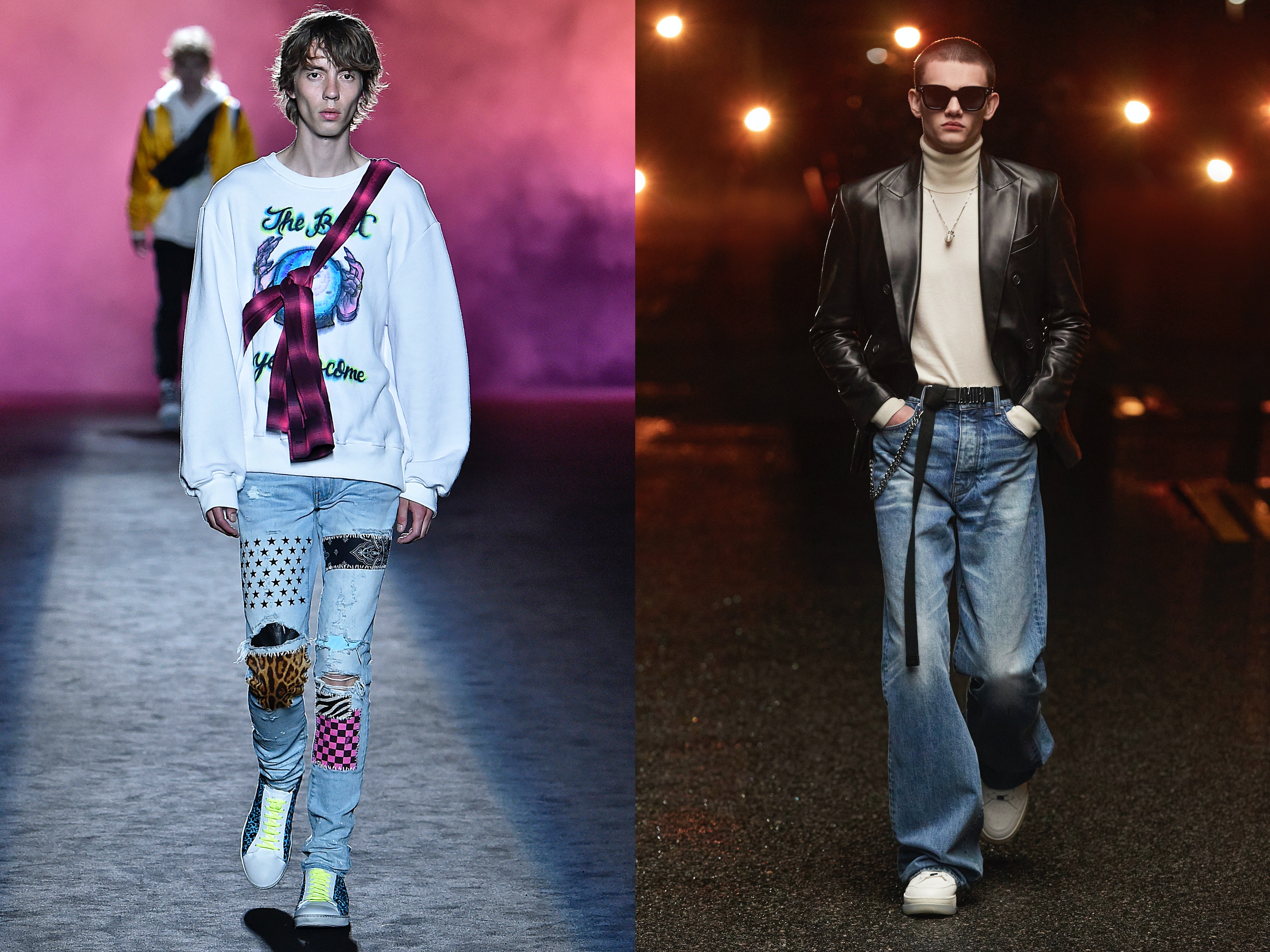 “The Prince of Skinny Jeans Says Goodbye to All That,” wrote GQ’s Rachel Tashjian in April about his Autumn 2021 collection, attributing the preference for baggier silhouettes as evolution brought on by the pandemic’s sweatpant craze.

Unlike the leading luxury brands, Amiri said he can’t “produce as much as they can [of a hit product] and flood the market and then, two years later, switch the creative director, and then start something completely new.”

In order to keep his current brand identity aspirational, he has focused on limiting how much product the brand produces to help drive full-price sales and boost the brand’s overall perception.

Amiri’s growing popularity on the secondary market indicates the designer’s approach is working. The brand recently made Grailed’s top ten most popular brands list for the first time in the first quarter of 2021, when another Los Angeles rock-n-roll label, Chrome Hearts, also saw a significant jump in popularity. Amiri had already jumped significantly in popularity in 2020 on the resale site’s listings, up from 28th most popular brand overall to 19th.

The fact that these jumps came during a year dominated by lockdowns and sharp drops in fashion shopping is an achievement. Amiri said the brand fared better than some of its peers last year because it ships its collections to retailers early, allowing it more time to sell before the discounts inevitably hit, and because the brand is disciplined about how much it produces.

“We ran the business on such a scarce model, there was not this massive fear of, ‘Oh, my god, you’re gonna have so much stock left over,’” Amiri said. “To this day, we cut a majority of our orders 15 to 20 percent on the wholesale side, just to ensure that there’s proper sell-through on the floor and the brand is not seen everywhere.”

Amiri will need to balance his focus on scarcity with his ambitious growth plans. To do that, he is planning to move much more of his distribution to his own retail channels, where brands have much more control over release schedules and pricing. Amiri launched it as a capsule collection for LA boutique Maxfield in 2014 and still relies on wholesale retailers like Mr Porter and Ssense for most of its sales — 70 percent in 2020. With the opening of stores, the brand is aiming to reduce that share to 50 percent in 2022, with the rest coming from Amiri’s online and physical retail.

Amiri is turning to Rosso for advice on when and how to open stores, he said. They met through a mutual friend in 2019, and bonded while exploring Amiri’s vintage archive in Los Angeles. 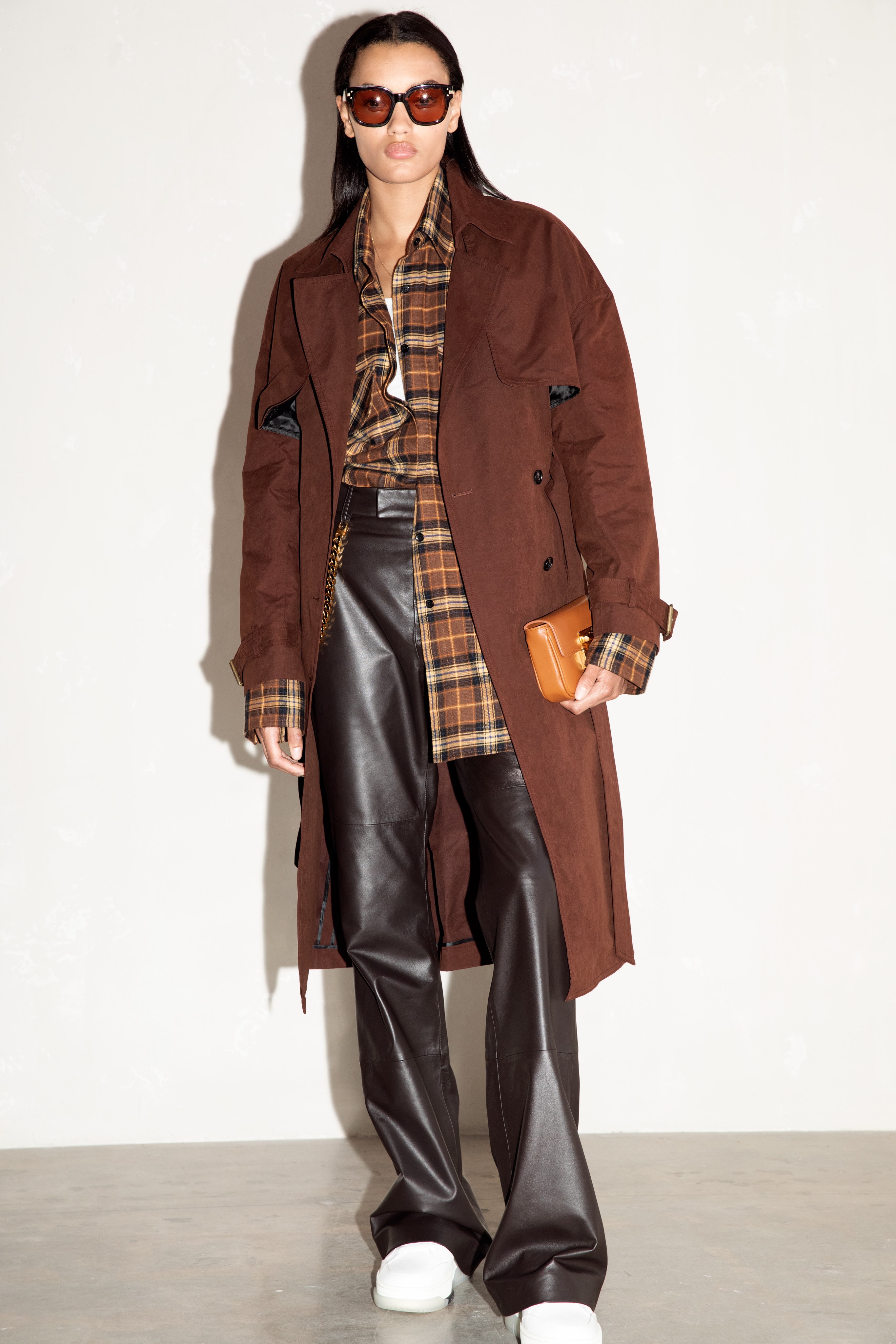 “We didn’t talk about business, and he was so excited, just looking at the clothes and the techniques … and I think that was really, really telling,” Amiri said, adding that it’s been helpful to pick up the phone and ask Rosso for his advice. “It’s very important to have someone who’s crossed over that mountain, and sometimes stand on their shoulders and look at the bigger view.”

Rosso said Amiri is “pioneering a new market segment” through the brand’s silhouettes, materials and colours: “a new and avant-garde vision of luxury, understanding the street but creating desire and aspiration for the best in class,” he said in an email.

Amiri’s bigger view also includes womenswear. The brand presented its first standalone women’s collection in June, after years of releasing women’s versions of some of the key men’s styles alongside its main menswear collections. Amiri’s vision for women was much more understated than this menswear, focusing on elevated sportswear — less punk and more polished.

“We said, let’s not let it be a derivative of [the men’s aesthetic]. Let it have the same energy and let it have its same confidence but let it stand as its own line,” he said. Before he presents the women’s collection on a runway anywhere, he said he wants to develop it further and give his retailers time to respond to it.

During the pandemic, he filmed shows in Los Angeles, staging this Autumn 2021 presentation across a bridge overpass downtown. But Amiri does plan to return to the runway in Paris.

“Being a young brand, there’s rules you break and invent, and there’s also rules you follow,” Amiri said. “It’s very important to be part of that story, and to always know where you need to align yourself.”