FLORENCE, Italy — When Aquazzura co-founder Edgardo Osorio noticed his clients arriving for meetings in flat shoes, he did not take offence that they weren't wearing his high heels. Instead he decided to add flats as a new category to his burgeoning shoe business, demonstrating a key skill that had already served him well — listening to his customers.

We are always interested in listening to our girls. What they want, what they need, they don’t even necessarily need to tell you. They tell you without telling you

“We are always interested in listening to our girls. What they want, what they need, they don’t even necessarily need to tell you. They tell you without telling you,” Osorio told BoF. “I realised there was no flat shoe in the market that you wear from day to night and wear to a cocktail party and feel as chic as a heel. And that was a whole new part of our business, which exploded and became huge.” 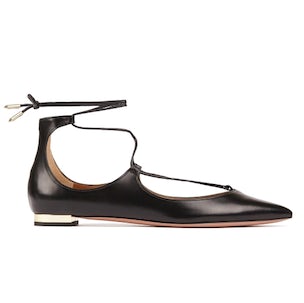 The strategy has, thus far, paid off. Aquazzura, which is sold at 350 stockists across the globe, including Barneys New York, Net-a-Porter and Matchesfashion.com, has tripled its business and production of shoes over the past two years, making it one of the fastest growing self-financed luxury footwear businesses in recent years. Market sources estimate the annual revenues of the company to be over €20 million ($22 million), though the company declined to disclose specific financial figures.

“It’s been exponential growth,” said Ricardo D’Almeida Figueiredo, who co-founded the brand with Osorio. “In the past two years, we really tripled all the quantities and the size of the business. It grew beyond our expectations and wildest dreams.”

The pair say they take the process of building Aquazzura into a luxury accessories company very seriously, ensuring each step of its growth is carefully considered, mapped and executed flawlessly before embarking on another. To help manage the company’s next stage of growth, they have hired former Pucci chief financial officer Jean-Michel Vigneau as chief executive and Cyrille Callari as chief operating officer.

Aquazzura’s success comes at a time when demand for luxury footwear is booming. Last year the global luxury footwear market grew by 4.4 percent to reach $28 billion and is expected to reach $36 billion by 2020, according to Euromonitor.

The company, which was founded in 2011, is embarking on aggressive direct retail investment over the next few years with plans to launch men’s shoes next year and leather goods further down the line. Osorio said it was also considering other categories like beauty, sunglasses and perfume.

Aquazzura already has stores in Florence, New York and London with further openings planned in Miami, Moscow and Hong Kong. Each outpost is decorated individually to its location — with graphic backgrounds, plush seating and elegantly polished shelves serving as a glossy backdrop for the product — to provide a different experience for the label’s glamorous globe-trotting customers.

But a beautiful store only goes so far: it all really comes down to shoes. “Innovation, creativity, product is king,” Osorio added. “You need to make sure you have the production, that you have quality, that you have that down and you have the uniqueness. I think that nowadays, it’s about coming up with something that is unique and different, that obviously people want to buy and is commercial.”

However, honing that point of view takes time, say the pair, who spent five years developing the concept for the brand before launch. Reflecting on their success, Osorio said he believed there were many elements that had helped the company to flourish, the first and most important lesson being working and learning from others in the industry.

Nowadays you need everything that working in an industry gives you. You learn from other people’s mistakes, you make contacts that will help you.

“I think a big mistake a lot of people do is they leave university and they want to start a company immediately, which, you know, can also work and kudos to the people who do it,” said Osorio. “[But] It’s so difficult. Nowadays you need everything that working in an industry gives you. You learn from other people’s mistakes, you make contacts that will help you. Starting a company from university would have been impossible for me if I didn’t have my contacts with factories and personal relationships.” 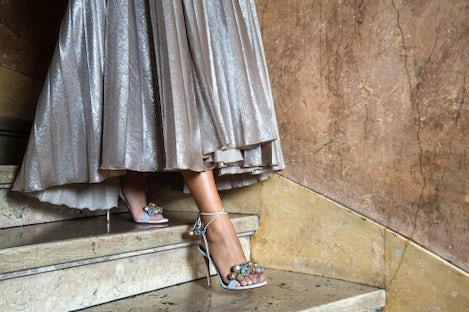 Indeed, Aquazzura has defined itself as an expert in luxury shoe manufacturing, thanks to Osorio’s deeply forged connections with his suppliers and factories in Florence and his background working for Roberto Cavalli, Salvatore Ferragamo and René Caovilla, while D’Almeida Figueiredo ran his own PR consultancy whose clients included Louis Vuitton, Cartier and Gucci.

“I worked for other people for 10 years, in all kinds of companies, and learned from other people’s expensive mistakes before obviously making my own as well,” Osorio said, adding that he believed his and D’Almeida Figueiredo’s shared experience in different fields have worked to complement each other’s strengths.

Second, the brand’s location in the heart of Florence, was “vital” to the duo, who emphasise that a large part of their success is down to the relationships they have built with their suppliers and factories in the area. Aquazzura’s headquarters are based in the left wing of the iconic Palazzo Corsini, where the company also has a store.

“Italy is a country where most of these factories are small to medium businesses that are run by families. So as a designer, its very difficult if you are not close to them, and you don’t have a relationship with them,” said Osorio.

“Going every day to the factories, talking to them, they knew me. The owner knew me, the lady cleaning the shoes at the end of the production knew me, everybody knew me,” he continued. “The pattern-makers, the people that are creating the shoes, they need to know you… Because at the end of the day, when you are a young designer, you are the last one of their clients. You are the least important and its only because you have a personal relationship with them and its only because they believe in you, that they will actually deliver your shoes on time and deliver quality. It’s very difficult if you are not close to them.”

The pair also credit a third element of their success to social media, which helped amplify awareness of the brand in a way that it would not have otherwise been possible relying solely on traditional print media.

“We came out at a time when social media was exploding, as well as street style,” said Osorio, whose fans include fashion insiders like Giovanna Engelbert (formerly Battaglia) and Sabine Getty. “When we started, obviously we didn’t have the money to advertise, so we had the right girls wearing our shoes and then they were being photographed and it went viral. That was the right timing and we were giving the right product.”

This in turn helped the brand build relationships with some of the biggest names in wholesale, particularly in the United States. “The retailers started paying attention to us and from one season to the next, we [suddenly] had the best retailers in the world," said Osorio. "And the most incredible thing is that they tried the shoes and they sold out. And it kept growing and growing.” 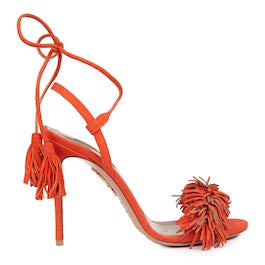 However, Aquazurra’s success has not been without it challenges. In June, the company filed a copyright-infringement case against Ivanka Trump, claiming the businesswoman’s eponymous brand had copied the design of its well-known “Wild Thing” sandal.

Protecting the brand’s designs is something both Osorio and D’Almeida Figueiredo feel strongly about, having hired a permanent legal team last year to help stop others from lifting the label’s distinctive designs.

“In the beginning, we couldn’t afford to invest so much in hiring lawyers and going to fight. We needed to concentrate our money and our energy, in the business,” said D’Almeida Figueiredo.

But once they were able to invest in a legal team, it became a priority for the company, Osorio added, who stressed the importance of being able to protect his designs and the brand’s aesthetic against large companies.

As a parting thought, Osorio said he believed in following gut instinct when it comes to launching and building a brand like Aquazzura.

“Your dreams can’t come true if you don’t dream, so I think the biggest thing I can say is dream big, dream what you love because everything is possible, you just need to make it happen. And then once you have dreamt, you need to — like the Italians say — pull up your sleeves and start sweating.”