PARIS, France — The day before the winners of the fifth annual LVMH Prize were announced, the cavernous Frank Gehry-designed LVMH Foundation in Paris was nearly empty. First to arrive was Mike Eckhaus, one half of New York-based gender-neutral label Eckhaus Latta, who with his partner Zoe Latta already landed in Paris a week ago. “I’m feeling confident and I’m happy to be here,” said Eckhaus, while steaming a range of garments from the brand’s archive as he mentally prepared for next day’s presentation.

Newly made friends including the designers behind Kwaidan Editions and Eckhaus Latta, as well as Botter and Doublet, quickly greeted each other while they reflected on their labels’ progression since they last saw each other in March during the semi-finals. Despite being in competition for the €300,000 prize, designers portrayed calm in the 24 hours leading up to the big reveal during which the finalists expressed admiration for each other’s work.

“I don’t expect to win,” Masayuki Ino said with a laugh on Tuesday. He said the highlight of the competition was “when Haider Ackermann saw my collection in the semi-final and told me that John Galliano would be jealous of my materials.”

On Wednesday, Ino was crowned the winner of this year’s LVMH Prize. “I'm very surprised and confused,” said the designer. The award granted the designer with €300,000 in prize money and a year-long mentorship from executives at the luxury conglomerate, including Sophie Brocart, senior vice president of LVMH’s fashion ventures, and chief executive of Nicholas Kirkwood.

The Japanese gender-fluid streetwear label, known for its innovate textile-designs and way of merchandising product, was praised by judges for its approach to texture and its humorous designs. The brand was founded in 2012 and shows during Tokyo Fashion Week. It currently has 25 global stockists including Dover Street Market and 10 Corso Como. Ino himself was born in Gunma province in 1979 and graduated from Tokyo Mode Academy School and has experience working for Miharayasuhiro as shoe and accessory design chief. 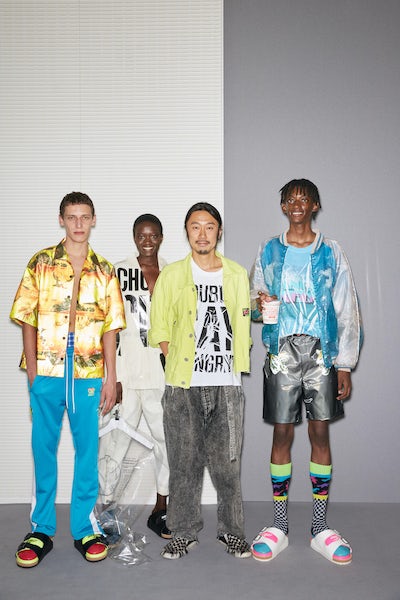 "[Ino's work] felt like a modern-day Issey Miyake," said Clare Waight Keller, artistic director of Givenchy. "He pushes the boundaries of textiles and clothes and even though he has a language barrier, he presented his collection very well."

"I was completely amazed by the modernity of his textures," agreed Nicolas Ghesquière, creative director of Louis Vuitton womenswear. "I've been on this jury for five years and this year I felt it was important to celebrate execution."

Ino said he didn't know just yet where to allocated the cash injection and mentorship towards.

A runner-up Special Prize was also awarded to Korean-born designer Rok Hwang, whose London-based womenswear label is characterised by elegant, adaptable garments which play with the contrast between femininity and masculinity. The label, now only in its third season, already has over 100 stockists including L'eclaireur, Lane Crawford and KM20.

He received a grant of €150,000 and year-long mentorship from the LVMH group, which the designer said he would use towards "creating a strong foundation for the company" by hiring specialised people in fields, as well as invest in "visual merchandising in order to connect to customers more directly."

Within five years, the accolade, which was created by Arnault in 2014, has positioned itself as the holy grail of fashion prizes among emerging designers. The award’s prestige stems from the grand sum of prize money offered to its winners, a cast of star designers as jury and a direct affiliation to LVMH, the world’s largest luxury conglomerate.

On the prize itself, the finalists unanimously agreed: it’s the biggest prize for emerging designers in the world. “You can’t compare the quality of the judges and the visibility the prize gives to anything else,” said Léa Dickely while fitting a double-breasted, python-printed coat from Kwaidan Editions’s latest collection on one of her three models.

“The power lies in the well-executed prize itself, as well as the amazing selection of [shortlisted] designers,” agreed Parisian designer Ludovic de Saint Sernin who, only two seasons in, is the group’s youngest finalist. “It’s an amazing opportunity to stand in front of all the creative directors of LVMH and show them your collections, it’s very rewarding.”

This year’s nine finalists were selected from over 1,300 applications and 90 countries. The selection, which included three design duos as well as three brands creating gender-neutral fashion, was made by a jury comprised of nine creative directors from LVMH-owned fashion houses including Karl Lagerfeld, Nicolas Ghesquière and Maria Grazia Chiuri, along with Delphine Arnault, Jean-Paul Claverie, Sidney Toledano and Pierre-Yves Roussel of LVMH, as well as a panel of 48 additional fashion experts, including Vogue China editor Angelica Cheung, art director Fabien Baron and Dior face Bella Hadid. 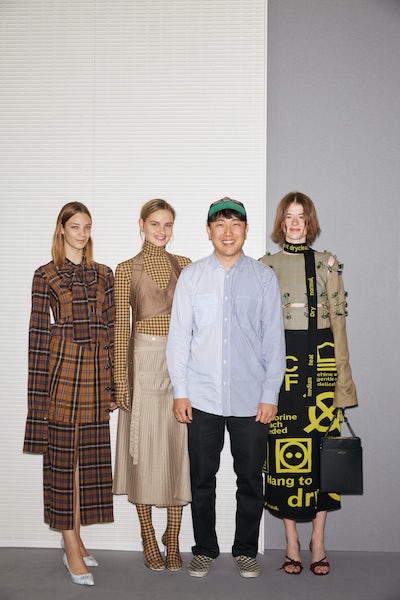 While winning the competition was top of mind for each finalist — most brands admitted that victory would enable them to expand their teams, open mono-brand retail and restructure the communication strategies of their labels — all brands agreed the experience itself had already significantly increased their exposure among international press, buyers and consumers, and to an extent had set up their businesses for future success as a result.

For LVMH, not only is the prize a major PR-moment, as well as a good occasion to align itself with young fashion talent, it mostly serves as the perfect opportunity for the group to boost its talent pipeline by identifying and forging relationships with top emerging designers early on in their careers. It’s telling when looking at the track record of past finalists who have grown successful companies of their own or have been appointed by the group. Virgil Abloh, artistic director of Louis Vuitton Men’s, was a finalist of the prize in 2015. And most recently, Dior Homme hired 2017 finalist Yoon Ahn as its jewellery designer.

As for Ino and Hwang, the win shouldn’t be taken lightly. While the prize has proven to grow the business of many past winners including Marine Serre, Marques’ Almeida and Jacquemus, success isn't guaranteed. Since winning the prize in 2014, both Thomas Tait and Hood by Air have discontinued their lines, while 2016 Special Prize winner Vejas Kruszewski recently postponed his label to join Italian leather brand Pihakapi.

The key to sustainable growth, according to last year’s Grand Prize winner Marine Serre, is to be hyper-aware of the speed at which prize money is being spent. “It goes quite quickly,” she said. To which 2016 winners Marques’ Almeida added: “Use the money wisely and face the challenges that get thrown your way.”

But Ino wasn't worried about what’s ahead. “I'm going to take it step by step to ensure sustainable growth. I'm going to grow at my own pace.”

Christopher Morency travelled to Paris as a guest of LVMH.