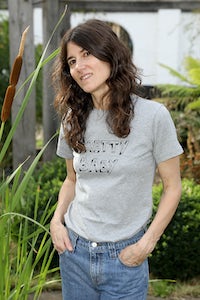 LONDON, United Kingdom — Bella Freud’s blouse is patterned with little hearts. She calls it her “Mick shirt,” named for Jagger. It’s a reminder that the Rolling Stones are a constant thread in her story, right down to her choice of Ella Richards, granddaughter of Keith, as the face of her newly launched collab with J Brand jeans.

Ella’s grandmother Anita Pallenberg, who died in June, was Freud’s enduring style inspiration. The way Keith wore Anita’s clothes during the 12 years they were together was echoed in the slim-hipped suiting that was a signature of Freud’s first act in fashion during the '90s, when she was anointed by the fashion industry for her innovation.

Her second act has been a pragmatic and instructive engagement with that industry’s harsh realities. When recession kicked the guts out of her business — “absolutely murderous” she calls it — she had to get entrepreneurial. The most promising connection she made was with the actor John Malkovich. They created several short films together. The last one, "Hideous Man," was based on some obscene poems written by Malkovich’s friend Gary Sinese, who was jobless and bored in Hollywood. It spun the story of a group of beatnik girls waiting for their guru to arrive. Freud needed a piece of clothing to convey their smarts. She designed a sweater, namechecking poet Allen Ginsberg and director Jean Luc Godard: “Ginsberg is God” on the front, “Godard is Dog” on the back. “I wasn’t even going to make it to sell anywhere,” she says. But she did produce 50, and she put them in her friend Dan Macmillan’s shop, Zoltar the Magnificent. And Kate Moss wore one, and that was it.

“I wasn’t going to make any more, then Camille Bidault-Waddington said, ‘You’re crazy, of course you are,’ so I thought I’d treat it as an edition, and each time I did it, I’d change something.” Then Freud made another sweater: “Je t’aime Jane,” for another of her heroes, Jane Birkin. Her father Lucien contributed design number three, a drawing of his whippet Pluto, while she was sitting for him one day. “I said, ‘Could you write my name so I could use it as my label?’ and he was drawing and after about half an hour he said, ‘Is this all right?’ He’d done this little box with ‘Bella’ and ‘Freud’ with that little drawing in the middle and it was perfect.” 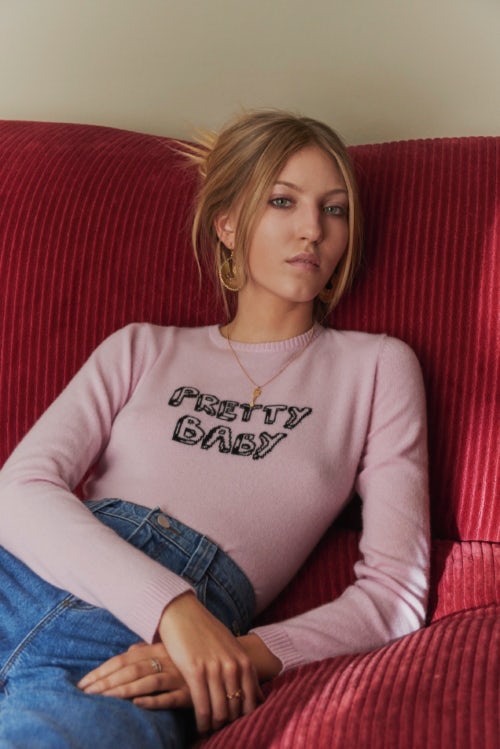 And that is how artlessly Freud’s career was reactivated, with a little sweater line. She feels it coincided with a change in the way store buyers did business. They started shopping a collection as if they were buying for themselves. But her Act Two really kicked into gear about five years ago, when Alexa Chung wore "Je t’aime Jane." “I had 20 of them sitting in my warehouse lockup for eight years,” Freud says with a hint of rue. “It was just incredible, I could have sold thousands. Then I thought ‘OK, how could I expand again without doing all the things that happened before?’ And Laura Bailey said, ‘There’s this guy I know who’s really into brands.’”

Bailey was talking about a creatively inclined entrepreneur named Peter Dubens (who is now backing Chung’s line as well). Freud showed him her rudimentary website, and some of the films she’d made with Malkovich, and he was persuaded. At the same time, she was stalking Maria Lemos, founder of the Rainbowwave showroom which Natalie Massenet had told her was the best representation she could get. “Maria asked me if I really wanted to get back into it. I told her I’d never stopped. And I thought I might as well go for it, because doing it a little is the same as doing it a lot. So she said she’d get behind me. And it was like that scene in a movie, where everything starts going right. I suddenly felt sure about what I was doing.”

Dubens’ investment ultimately enabled brand extensions into candles and fragrances and then, in 2015, a flagship store on Chiltern Street. “What’s lovely about the shop is I was able to do tailoring,” Freud says. “Then I started adding things I really liked, and experimenting, and now that’s gone onto the website.”

The growth feels real, paced to the capabilities of the business. “It seems much more possible now you can do what suits you, rather than what you’re supposed to do,” she agrees. But that means if you’re looking for a Factor X in her success, it has to be Freud herself. Now 56, she has lived a life outside fashion which has been a formative and fascinating roadmap of experience, right up to the present day when, recently and amicably separated after a 23-year relationship, she claims she feels “almost like a teenager, but with masses of experience, trying out new things and not being limited by one’s own comfort zone”. Freud has called her latest perfume "Psychoanalysis." That’s the wriest acknowledgement of her familial heritage.

To jump from great-grandpapa Sigmund to J Brand jeans might seem like a bridge too far, if it weren’t for the fact that there is some psychological import in Bella’s relationship with denim. If her capsule collection for the LA-based label is small, Freud at least got to make the jeans she likes to wear: wider-legged, high-ish in the waist. They’re called the Jane, of course. There’s also a boot-cut option called Boy/Girl. She imagines Steve McQueen in that one. Both styles are very '70s, pre-“designer.” “I remember being in Chinatown with my dad when I was 14, and there was a long denim coat with a sheepskin collar and he said, ‘Do you want it?’ and I said, ‘Oh no, no.’ How I wish I had it. But it was so unusual to be bought anything.”

What she means is that her parents broke up when she was young, and her mother never had much of anything to share with her daughters. “My dad wasn’t really around,” Freud continues. “What I noticed with my son Jimmy when I was younger, you can see your child wants to do something and you just help them along a little bit. In the '70s, people didn’t think of their children in the thoughtful way they do now. Their own parents were slaves to institutions, and they’d stopped all the institutions but it was just the Wild West, really. They didn’t know how to protect their children without re-making all the rules they were trying to break.”

The peripatetic chaos of Bella’s own early years was documented in "Hideous Kinky," her sister Esther’s roman à clef. How does a young woman make the rebellious rite of passage to selfhood when the lack of structure in her existence provides so little of substance to rebel against? Freud found it. “Even though my mum had made her own rebellion, I had a stepfather who made up all sorts of absurd rules. There was tons of stuff to rebel against.”

It was like that scene in a movie, where everything starts going right. I suddenly felt sure about what I was doing.

Enter the Rolling Stones, soundtrack to teenage Bella kicking against the pricks. When she was studying in Rome in her teens, she met and became friends with Anita Pallenberg. Freud was wholeheartedly seduced by her honesty, her integrity, her desire to leave her gilded but troubled past behind. But maybe there was also an element of wishful thinking in her own fascination with the Stones. “I always used to think what I really wanted to do was be a musician and I just hadn’t dared,” Freud muses. “And now, 20-something years down the line, it’s interesting that whenever there’s been an opportunity to give up — the business going bust, having a child — I never did it.” She credits her father. “When he was working on a painting that was going wrong, he didn’t stop, he went on, and made it right. That’s why he was good, because he never gave up.” Freud claims that is one parental trait she consciously borrowed.

It’s also motivated her activist instinct. Fifteen years ago she was a co-founder of The Hoping Foundation, which supports Palestinian refugee children in camps across the Middle East. The fundraisers staged by the foundation over the years have convinced Freud that fashion people are good at making the impossible happen. “But it’s all within our world, and no one really knows.” She values fashion as “a vehicle for opinion,” but she’d love to see it directed more towards reminding people, especially the young, of the value of their opinions. And the value of their values too. “That’s what I really care about, the way one person treats another.”

As much as Freud insists she never wanted the words on her signature sweaters to be messages, there is a cumulative impact. The choice of names? “People who seem radical in whichever way they are,” she concedes, whether it was Anita Pallenberg or post-punk agitproppers The Pop Group. For her J Brand collaboration, Freud designed sweaters in lurex, with three ideas: “Boy Girl,” “Pretty Baby” (because, she observes astutely, “When you’re thinking denim, you’re thinking Brooke Shields”) and “Gangs of Love.” With this last one, she was thinking about the toughness and camaraderie of the Women’s March. “I love femininity that goes with hardness,” she says.

“In the end, everything is about language,” Freud continues. “It’s the most important thing in the world. And if you want people to hear you, it has to be the language of love. That’s all there is. That’s what stops people in their tracks.” She’s quietly forceful as she says these words. It makes you wonder how she ever doubted herself. It hardly matters that Freud was never a real musician. She’s been playing a different kind of tune all these years. “This is what I ought to have been doing,” she acknowledges. “And actually, I’m quite good at it.”