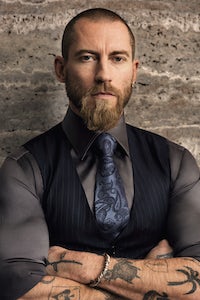 LONDON, United Kingdom — BoF can exclusively reveal that Italian menswear brand Brioni has appointed Justin O'Shea, former global fashion director of Munich-based luxury e-tailer MyTheresa, its new creative director. The news comes hours after MyTheresa, which was acquired by American luxury behemoth Neiman Marcus in September 2014, announced O’Shea was leaving the company. In his new role at Brioni, which is owned by the French conglomerate Kering, O’Shea will be responsible for the brand’s collections as well as its image. The appointment will take effect on April 1st.

“Challenging boundaries has always been in Brioni’s DNA and this choice confirms it once again,” Gianluca Flore, chief executive officer of Brioni, told BoF. “Justin soon emerged as the best choice for the brand’s creative direction as he has shown an accurate understanding of the company’s heritage and an assertive approach on how to reinforce our core values.”

"The menswear market of today offers unique opportunities and it was an easy decision to be part of the revitalising of this prized brand," said O'Shea. "I am fascinated by the unique and rich heritage of Brioni. This house has all the pieces of the puzzle — the craftsmanship, the quality and an incredible archive. I am eager to reinterpret all these elements and make them relevant for today’s customer."

Grita Loebsack, chief executive officer of Kering’s luxury couture and leather goods emerging brands division, added: “I join Gianluca in welcoming Justin O’Shea as creative director of Brioni. An unconventional profile for such a position, Justin brings a holistic approach and strong business understanding. I believe his vision will accurately translate into this role and add a distinctive signature to the House.”

Indeed, the appointment of O’Shea — who has no formal training or experience as a designer — is an unconventional move for Brioni. In January of this year, O’Shea was promoted from global buying director to global fashion director of MyTheresa, which he joined in 2009 after a stint as a buyer for Al Ostoura, a luxury retailer in Kuwait.

In part, the decision reflects the changing role of a creative director at a top luxury brand, a post that now typically comes with a range of responsibilities that go far beyond designing collections. Today, rather than traditional design skills, many of today’s top creative directors are perhaps most prized for their ability to craft and communicate a strong point-of-view across a number of channels, encompassing everything from public appearances to social media. Along with his experience in retail, O’Shea has certainly forged a distinct visual signature of his own. His beard, tattoos and penchant for sharp suits have made him a highly recognisable street style star at fashion week, with over 79,000 followers on Instagram.

In some ways, Brioni’s choice recalls the unconventional appointment, in 2011, of Carol Lim and Humberto Leon, the founders of concept store Opening Ceremony, as co-creative directors at LVMH-owned Kenzo. While Leon and Lim had designed a clothing line for Opening Ceremony and worked on co-branded apparel with labels such as Levi’s and Timberland, the duo were best known as retailers and the appointment was the first time someone with this background had taken the creative reins at a major fashion brand.

Similarly, Brioni is also not the only company to have placed a street style star in a design role. Last year, Caroline Issa, a bone fide street style sensation as well as the fashion director and chief executive officer of Tank magazine, partnered with American department store Nordstrom to launch a ready-to-wear line. Issa, a former management consultant, who has also worked as a model, brings a certain knack for image-based communication and social media to her design role.

At Brioni, O'Shea steps into shoes previously filled by Brendan Mullane, who served as the brand’s creative director from July 2012 to February 2016, when the company announced that Mullane was leaving the post by mutual agreement. Mullane’s departure came during a week of designer shake-ups at three of the world’s top luxury menswear brands: LVMH-owned Berluti parted ways with Alessandro Sartori, while Stefano Pilati exited as head of design for Ermenegildo Zegna Couture, a position which was later expanded and filled by Sartori, who now oversees the creative direction of all Zegna brands.

Brioni, which was founded in Rome in 1945, is best known for its traditional suiting and has long held links to the film industry, having outfitted numerous actors in the role of James Bond, as well as stars including Richard Burton, Clark Gable and Matthew McConaughey for red carpet appearances. Brioni’s products are made in Italy, some by tailors educated at the Scuola di Alta Sartoria tailoring school, which the company founded in 1985.

Kering (then known as PPR) acquired the house in 2012, the year Mullane joined the company. Since, Mullane has pursued a younger aesthetic for the luxury house, introducing more modern items such as nylon parkas, metallic striped suits and suede bomber jackets. Today, Brioni’s offering encompasses men's ready-to-wear, shoes, leather goods, jewellery and fragrances, as well as eyewear, which is produced through the Kering Eyewear division.

In the year prior to the Kering acquisition, Brioni shuttered its womenswear line, closing the manufacturing plant in Italy where its women’s collections were produced and parted ways with then-creative director Alessandro Dell’Acqua. Last year, Brioni returned to the catwalk at Milan men’s fashion week, after a ten-year absence, presenting its Autumn/Winter 2015 collection.

According to Kering’s latest annual report, Brioni’s performance in 2015 was weighed down by weak demand in Eastern Europe and the Middle East, and the company streamlined its distribution channels, becoming more selective with its third-party distributors. At the end of 2015, Brioni had 46 directly-operated retail stores.