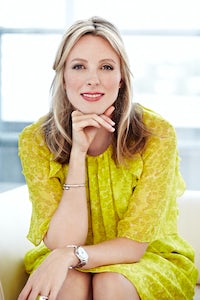 LONDON, United Kingdom — Farfetch has appointed former Net-a-Porter executive Stephanie Phair to the newly created role of chief strategy officer, overseeing its strategic planning and innovation functions, effective immediately. Phair, who previously held the role of president of TheOutnet.com and was part of the executive team at the Net-a-Porter Group from 2009 to 2015, will sit on Farfetch's executive board and report to founder and chief executive José Neves.

“Our strategy is to look how people are going to shop for fashion in five to 10 years’ time,” said Neves. “Stephanie’s role is really focused on the future of Farfetch and it was important to have someone sitting at the executive board who was focused on looking ahead, what’s out there and what can be the future of the industry and our company.”

Phair is a member of the advisory board of venture capital firm Felix Capital, and sits on the board of Italian luxury brand Moncler. Before Net-a-Porter, she worked for Portero, an online luxury marketplace for pre-owned accessories, as well as American Vogue and Issey Miyake.

“It’s a mix of operational expertise and having actually run a business, understanding what the requirements are and the people needs and the talent needs,” Phair told BoF, describing her new role. “But also having had the opportunity over the last year, and even at my time at Net-a-Porter, to really witness some of the changes in the industry and seeing some of the upcoming start-ups that are creating new disruptive ideas. There is still a huge amount of opportunity, and I think Farfetch is extremely well positioned to capture market share.”

The appointment comes at a time of rapid growth for the fashion e-commerce platform, which connects consumers with a curated global network of luxury boutiques and, increasingly, brands without the significant inventory risk and high working capital requirements of a traditional e-tailer. Farfetch expects to surpass gross sales of more than $800 million this year, up 60 percent from 2015, putting the company’s estimated annual revenues in the ballpark of $200 million (Farfetch is said to take a 25 percent commission from partners).

To date, the platform has attracted about 1,500 boutiques and over 200 brands, a new area of growth, including Roskanda Illincic, Paul Smith, JW Anderson and Proenza Schouler. It also offers agency and white-label solution for brands, dubbed Black & White, which counts Christopher Kane, Manolo Blahnik and AMI as clients.

According to data from web analytics firm Alexa, Farfetch is now the world’s top online luxury shopping destination, measured by traffic, outstripping major luxury e-commerce competitors like Net-a Porter and Neiman Marcus. The company, founded in 2008, is not yet profitable, however. In May, it closed a $110 million Series F round, at a valuation thought to be around $1.5 billion. 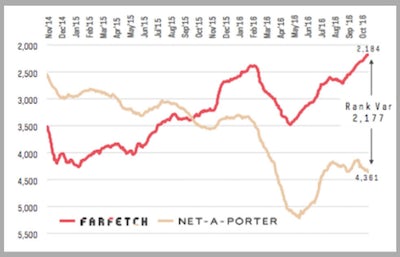 The share of luxury sales occurring online will reach 18 percent by the end of 2025, making e-commerce the world’s third largest luxury market after China and the US, according to McKinsey & Company. Yet the vast majority of sales will still happen in physical stores, something Neves sees as a major opportunity for Farfetch, which he describes as “omnichannel out-of-the-box,” meaning that partners can leverage the platform to link online inventory with inventory in their physical stores and deliver services like click-and-collect and in-store returns.

“We believe that retail will have to be reinvented. Retail [still accounts] for over 90 percent of luxury fashion sales. That’s not going to go away. We think pure online models have their limits,” said Neves. “We also don’t believe that the traditional retail store as we know it today will be financially viable. It has to have a digital platform connected to it, it needs to have a unified view of the inventory, it needs to be connected to e-commerce and we want to be the pioneers.”

The appointment of Phair, who will be based at Farfetch headquarters in London, follows the company’s hiring of Jeffery Fowler as president of Farfetch North America, who started his role in September. Farfetch, which has around 1,300 employees across eight countries, is profitable in certain markets (the company declined to disclose which ones) but not yet profitable on a consolidated basis. The US currently accounts for 33 percent of sales, while Asia Pacific makes up 26 percent.

“We are on very clear path to profitability,” said Neves, who also denied media reports that a potential stock market flotation could happen as early as next year. “There are no plans at all for an IPO in 2017. We do have plans for an IPO eventually, but we would not consider it until the next two to three years,” he said.

“At the moment, it’s too early and we are growing very fast. There is so much to do in the business, and we need to focus on that whilst we are still a private company and think of an IPO a bit later.”