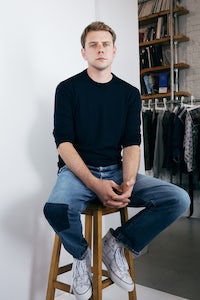 FLORENCE, Italy — J.W. Anderson is showing more than his Spring 2018 menswear collection on the Pitti Uomo runway this season. London-based designer Jonathan Anderson has chosen the Florentine showcase to debut a new long-term collaboration with Converse, which is set to arrive in stores in late autumn.

Anderson’s reinvention of the classic Chuck Taylor style, beloved by many a subculture and the designer himself, will be unisex and draw on the themes of his ready-to-wear collections. The first instalment centres on the idea of “day to night” and features wave detailing, J.W. Anderson branding and gradient colouring.

“I’ve been wearing Converse for years and years, so when they approached me I couldn’t turn it down because it’s something that I wear,” he tells BoF.

The collaboration aligns with a broader reinvention of Anderson’s creative strategy as his brand enters its second decade. Going forward, the designer will focus on what he described as a more personal, product-driven and collaborative approach. “I’ve got to the point where you have to break away,” he says. In March, the designer announced another partnership with Japanese apparel giant Uniqlo, set to debut later this year.

“This collection is a break off. We’re going where we’ve never been,” Anderson continues. “I want people to feel that they are part of a global picture and not just a kid on the runway. I keep perceiving myself to be young, but the more I do, I realise [the brand] is a part of a global picture. A fashion show is a very tiny part of the content. This was the best way to say that’s ‘done’ for me.”

I want people to feel that they are part of a global picture and not just a kid on the runway.

It’s the start of a new scale-focused era for Anderson, in which he wants to reach many more people through collaborations with brands that have much bigger distribution and retail networks than his own business. He culls inspiration and information from mass-reach companies with a certain quality level, like Dyson, a company best known for its vacuum cleaners and hand dryers, which he says is his favourite brand. “With the change of power and the oddness of where we are, you start to question what design is about,” he muses. “Converse or Uniqlo serve an incredible purpose to me. They are universal and I would love J.W. Anderson to be that universal, but we don’t have that [production] volume.”

The Converse collaboration was also very personal for Anderson. “It’s the first time I’m excited about projecting myself into product, which is a weird and new thing for me,” he says. “The collection for me feels more like an intimate portrayal of myself. It’s the tactility of it. It’s how I see myself in the summer or how I want to be in the summer. It’s a character that is a fantasy of myself and a self portrait of what I’m into and what I wear.”

On the runway, Anderson’s take on Converse sneakers will be worn with archetypal looks, such as the cotton chino and white T-shirt, or a sweater inspired by a vintage baseball card with classic blue jeans. Glitter, he says, will jar with the natural landscape as the epitome of manmade material. “For me, you have to compress other things and work out what is new. I think that’s showing the mirror,” he says. “This is a brand and it’s got my name on it. It’s about not being too comfortable where you are.”

The business that Anderson started in 2008, three years after he graduated with a menswear degree from the London College of Fashion, began to boom when it received minority investment from LVMH in 2013 and Anderson was appointed creative director of Loewe. In 2016, the company said J.W. Anderson’s revenues had grown by more 300 percent since that investment, and today he says that the business has “quadrupled in the last couple of years.” That may be down to the fact that Anderson’s women’s ready-to-wear and accessories have totally eclipsed his menswear, for which he first received acclaim, and his bestselling “Pierce” handbag has become a staple for fashion-conscious customers.

Converse or Uniqlo serve an incredible purpose to me. They are universal and I would love J.W. Anderson to be that universal.

Converse, for its part, is certainly hoping that a partnership with a designer like Anderson will prove to be a valuable association. Despite several re-designs of its classic Chuck Taylors — as well collaborations with Maison Margiela, Missoni and Comme des Garçons — the long-beloved brand has struggled to maintain relevance.

In its 2016 fiscal year, Converse’s revenue grew by only 2 percent, after growing by 21 percent in 2015 and 15 percent in 2014. At the end of the third fiscal quarter of 2017, which ended February 28, sales dropped 5 percent from the same period last year. But the tides may be turning for Converse, which is likely to benefit from a shift in denim silhouettes in favour of wide-legs, flared hems and abbreviated lengths away from the hugely successful skinny jeans made famous by Kate Moss and Hedi Slimane in the early ‘00s. The brand’s Chuck Taylors (and its derivatives) — which, together, account for the majority of the company’s sales revenue — look better with a flare.

Converse is keeping further details of its collaboration with J.W. Anderson close, including how widely it will be distributed, the exact date it will hit shop floors and how much the product will cost. But for Anderson, it’s no secret that he is ambitious.

“Ultimately I want to build a brand that one day someone else will do for me and inject newness into something that I have built,” he says. “We have to keep it interesting and keep the momentum going and you have to keep challenging yourself, otherwise I would still be making ruffled shorts. Sometimes you have to change the fundamentals of what you’re into, which takes a lot of energy,” he adds. “You have to question yourself and think of how you keep your brand moving forward.”

Can Converse Solve Its Chuck Challenge?