Chief executive Marco Gobbetti has outlined an ambitious three-pronged plan to elevate the British brand's positioning. Will it work?

LONDON, United Kingdom — Burberry is moving on up.

On Thursday, chief executive Marco Gobbetti laid out his much-expected, quite ambitious three-pronged plan to reinvigorate the 161-year-old British stalwart, which will include adding more leather goods and newness to its collections, tightening distribution by scaling back its lower-end wholesale partnerships, refreshing stores and using its reputation as a digital innovator to better communicate the transformation of the product offering.

The end goal is to elevate Burberry from an “accessible” label into a true luxury player that can go head-to-head with Europe’s most venerable houses, where prices are higher, margins are wider and growth is typically more stable. In October, chief creative officer (and one-time chief executive) Christopher Bailey announced that he was leaving Burberry after 17 years, making way for a new chapter in the brand’s creative strategy. A successor for Burberry has yet to be named, although several analysts, including Mario Ortelli at Bernstein, John Guy at Mainfirst Bank and Thomas Chauvet at Citigroup, have suggested that British designer Phoebe Philo — who made magic with Gobbetti at LVMH success story Céline — could be a replacement.

“By re-energising our product and customer experience to establish our position firmly in luxury, we will play in the most rewarding, enduring segment of the market,” Gobbetti said in a statement that coincided with the announcement of first-half results for the 2017 fiscal year. Sales were £1.26 billion ($1.66 billion at current exchange), up 9 percent from £1.16 billion ($1.51 billion) during the same period last year. Sales at stores open for at least one year were up 4 percent. Burberry will be “firmly in the luxury segment, the most enduring and rewarding part of the industry."

“We have the foundations to build on and the team to execute our plans,” Gobbetti added. “This will enable us to drive sustainable growth and higher margins over time, while continuing to deliver attractive returns to shareholders.”

This marks a change in fortune for the brand, as pre-tax profits have fallen every year for the last three financial years.

However, the move upscale will have some short-term implications on profitability. Burberry said revenue and adjusted operating margins will be “broadly stable” for the next two years, with growth forecast in 2021.

As expected, the market did not immediately react favourably to Gobbetti’s announcement. Burberry shares fell 10 percent in London trading on Thursday as the impact on short-term profitability from the new strategy concerned investors. "We did anticipate this," Julie Brown, Burberry's chief financial officer, said on a conference call on Thursday. However, Burberry expects that an increase in capital expenditure as it refurbishes stores will prompt higher sales. The US had a "negative performance" in the first half and remains "quite a challenging market overall," thanks to promotional activity in department stores, she added.

Bailey's latest “see now, buy now” collection, which revived the brand's iconic check — once feared for its association with working-class "chavs" and football hooligans — has been "very positive," Brown said. And Gobbetti, who joined Burberry in July, is confident in the long-term benefits of repositioning. His new strategy aligns with his experience at luxury brands including Bottega Veneta, Givenchy and, most importantly, LVMH’s Céline, which he transformed from a middling player into a cultish label in partnership with Philo. 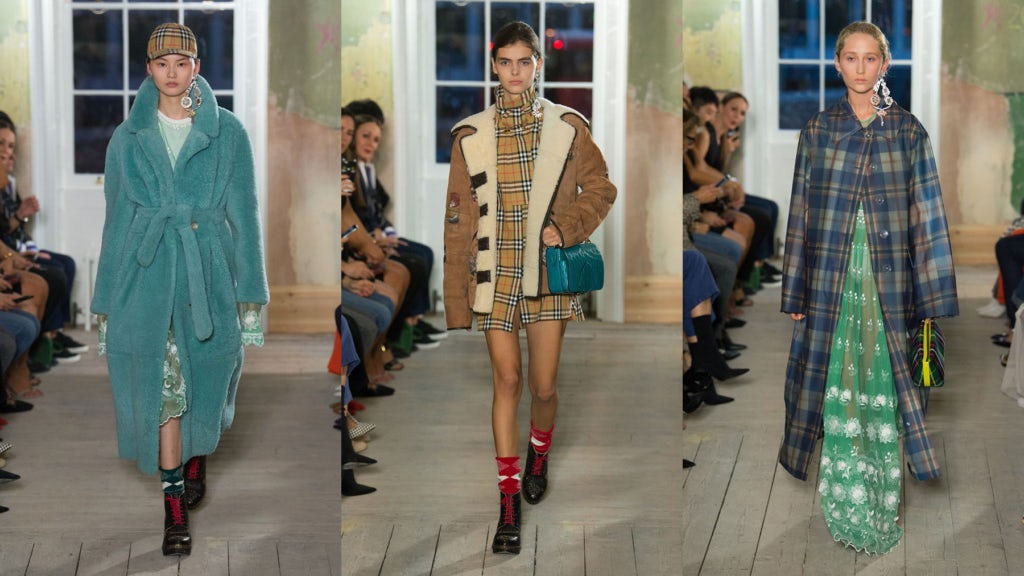 Despite limiting distribution — eschewing e-commerce and keeping a tight rein on wholesale — Céline’s long succession of “It” bags and the halo effect of Philo’s fervour-inducing collections resulted in consistent double-digit growth during Gobbetti's tenure. In a recent interview with BoF, LVMH Fashion Group chief executive Pierre-Yves Roussel said that Céline makes more in annual profit today than it did in sales a decade ago when Gobbetti and Philo first joined the company.

Gobbetti's decision to send Burberry upscale also follows pressure from business analysts to solve the brand’s unclear positioning. In the US, for instance, the general sentiment is that Burberry is an “affordable luxury” brand, more closely aligned to Coach than Dior, and therefore overly priced in the eyes of consumers. (In the first half of the year, the Americas was the only region where underlying revenue — or sales that don’t take into consideration additional costs or currency fluctuations — were down.) Wholesale accounts for 30 percent of sales in the Americas, versus about 20 percent across the business. To change that, Gobbetti says he will cut back on non-luxury department-store space and its own retail stores, starting with the US.

Honing and refining the accessories offering could help to quickly transform perception, especially if the design team is able to turn around a hit style with speed. Burberry is best known for its trench coats. While that product is destined to remain a sales “hero,” handbags and accessories typically generate higher margins and are better at luring repeat customers. Burberry has lagged in profit margin compared to rivals like LVMH and Kering, whose brands have larger leather goods offerings. Accessories account for just 38 percent of revenues at Burberry, versus 55 percent at Gucci.

Gobbetti’s first task is to reposition the product. Some Burberry items — like its polo shirts — cost much less than what its desired competitors charge, sometimes by 50 percent, while others — like its four-figure handbags and trench coats — are more aligned to the prices of rival luxury players. That means some prices will go up, though it won’t be a universal rule and will differ by product category.

“Today consumers' wardrobes are already full of iconic staples. Only innovation will entice them to buy,” Gobbetti said. For Burberry, that will mean creating constant newness by adding more novelty to core products, more capsule collections and building a wider handbag range. A recent example of the kind of product he'd like to see more of is the oversize tote rendered in a 1960s check that was pulled from the archives by the design team. “Bags with humour, personality and functionality; handbags that are identifiably Burberry” will be given more space in retail stores, explained Judy Collinson, the company's chief merchandising officer, who arrived in May 2017. (Collinson is a luxury retail veteran whose CV includes 22 years at Barneys New York. Most recently, she was senior vice president of merchandising at Christian Dior US.)

Gobbetti also plans on strengthening Burberry's digital backbone. The brand was, without question, one of the first fashion firms to tap the power of social media, launching on Facebook in 2009 and embracing "see now, buy now" catwalk collections earlier than most. It has also made significant investments in e-commerce, omnichannel retail and data analytics.

Gobbetti said the company will continue to focus on building innovative experiences, like its newly introduced augmented reality app. Gobbetti also posited that the company is committed to continuing with the in-season fashion show model, a project of Bailey's that some thought would fall off after his departure.

"'See now, buy now' is something we are deeply committed to. The direct-to-consumer approach is fundamental today," Gobbetti said. "Immediacy is part of the way consumers expect to access brands. The other element that is changing is the velocity and continuous engagement with the customer. They don’t expect any more to see two collections, they want to find novelty very often."

The other element that is changing is the velocity and continuous engagement with the customer. They ... want to find novelty very often.

Customer experience offline is of equal importance. Top stores are to receive a “light yet high-impact refresh,” with staff trained on leather goods and styling to increase productivity. A number of outlet stores will also be closed, although the company did not share how many.

While Gobbetti's track record indicates that his plans for Burberry are achievable, analysts underscore that these changes won't be easy to make. “I think it was the right thing to do. It shows a level of confidence in a new management team, but that doesn’t necessarily help the underlying market where momentum is drifting a little bit,”Mainfirst Bank's Guy said. “Merchandising, price and product are the type of things Gobbetti excels in ... My question is: will [a luxury shopper] buy a Burberry bag over Céline, Gucci, Louis Vuitton and so on. Is that asking the consumer to redefine how they think of Burberry?”

Indeed, moving to higher price points hasn’t worked for everyone. Mulberry famously u-turned on its move upmarket under ex-Hermès chief executive Bruno Guillon when shoppers balked at the new, higher price points. Last year, Hugo Boss also abandoned an attempt to jump from a premium player to a luxury one.

“It is going to be an uphill effort," said Luca Solca, head of luxury goods at Exane BNP Paribas, who spoke on the sidelines of the company's presentation on Thursday. "Going higher is very ambitious and you need strong traction. At the moment, the brand is weakening.” Finding a successor to Bailey quickly will be “of the essence” to reboot interest in the brand, he added.

While a new creative lead is essential to a successful revamp, Burberry has said little to address the recruitment process to replace Bailey or analysts' suggestions that Philo, who remains at Céline, could be a candidate. In October, BoF reported that LVMH is interviewing designers to replace Philo and rebuild the design team in preparation for her eventual departure from the French fashion brand. Fans of Philo — who knows her way around a trench coat, not to mention a handbag — believe she may be the key to establishing Burberry as the brand to truly own British luxury. However, in a meeting with investors on Thursday, Gobbetti said that nothing has been decided.

"We have factored in it will take some time to find the right creative lead for Burberry for the next decade," he said. "Don't expect any announcement very soon. There will be plenty of rumours, as there are already. We do not comment on any rumours."