Can America’s Fashion Giants Get Their Mojo Back?

Accessible luxury brands like Coach and Michael Kors radically changed their approach to everything from logos to discounting to regain their old cachet with consumers. It’s working, but for how long?

Can America’s Fashion Giants Get Their Mojo Back?

Accessible luxury brands like Coach and Michael Kors radically changed their approach to everything from logos to discounting to regain their old cachet with consumers. It’s working, but for how long?

The strategy shift appears to be working: in the year ending July 3, Coach’s revenue returned to pre-pandemic levels of $4.3 billion. The average price of its bags, clothes and wallets has risen for nine straight quarters, a coup for a brand that spent much of the last decade aggressively discounting to get shoppers’ attention.

Coach, Michael Kors and other brands that form the backbone of American fashion have, over the last year and a half, entered something of a renaissance. Using the industry-wide disruption caused by the pandemic as cover, they cut back on inventory, offered fewer discounts, closed stores and pulled out of some department stores and other faltering apparel retailers.

It was a painful but long overdue correction. Over the last three decades, brands like Kate Spade New York and Coach, both owned by the Tapestry group, as well as Capri-owned Michael Kors and privately-run Tory Burch, ballooned into multi-billion-dollar behemoths with global footprints predicated upon their ability to sell a taste of the good life for a fraction of the price of a European luxury brand.

But while the 2008 financial crisis fueled the growth of “accessible” luxury, it also squeezed the middle class that made up the category’s core customers. Those who still had some money to spend quickly discovered they had plenty of options, whether it was a $600 Gucci t-shirt, a $500 Staud handbag or a fast fashion knockoff. Brands like Kors and Coach responded by slashing prices and pumping out more and more styles, flooding shopping malls, department stores, outlets and e-commerce sites with product. Once they joined the race to the bottom, these brands couldn’t stop; shoppers came to expect bargains for designer names.

The biggest accessible luxury brands have now found their footing after a challenging decade. The question is whether Gen Z-friendly branding and fewer promotions will be enough to regain their cachet: For accessible luxury brands, true progress lies in sharpening their point of view to create products their customers want at full price, selling more of their products directly to customers and modernising their marketing. 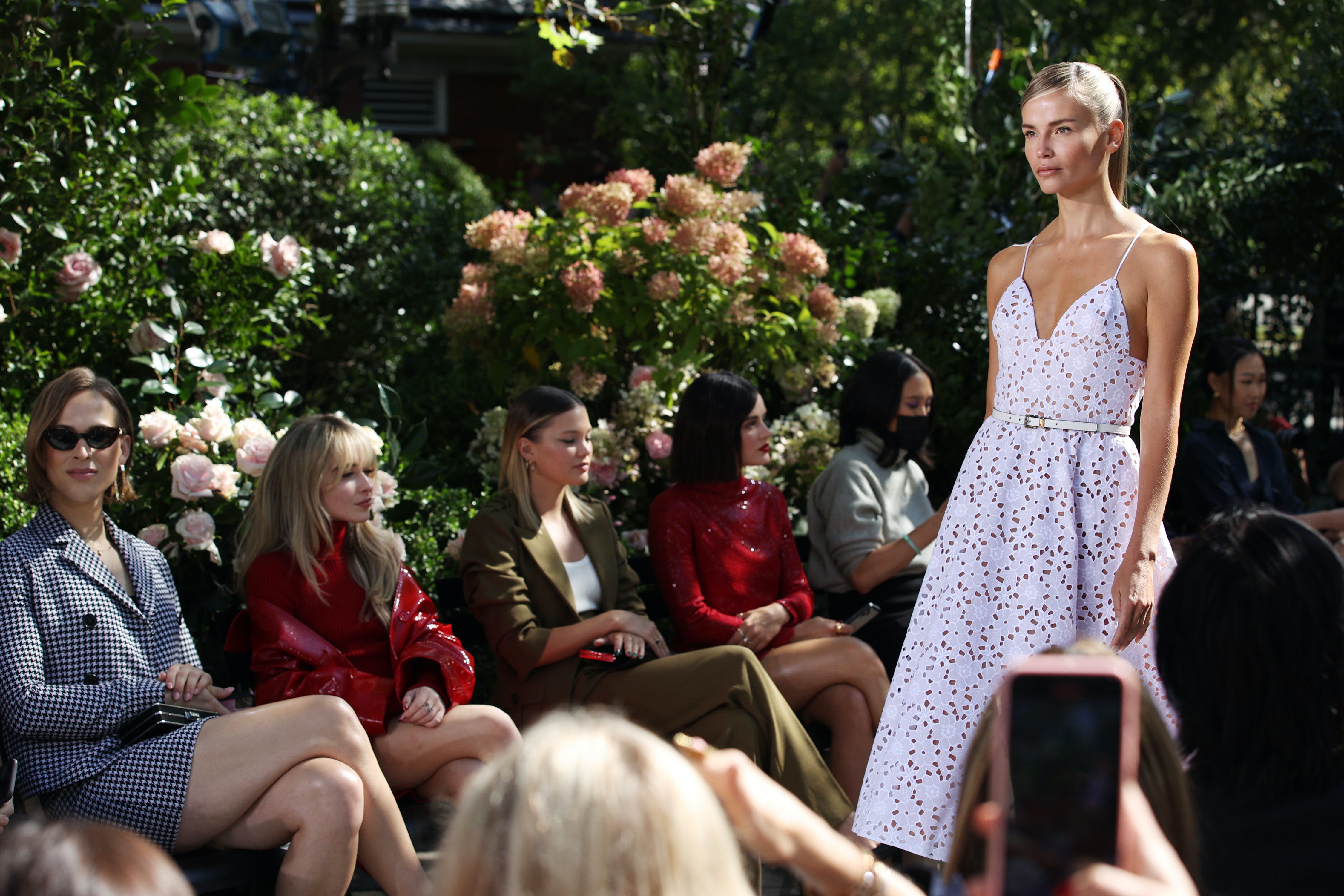 “Fashion credibility is extremely important,” said Oliver Chen, an analyst at Cowen & Co. “A brand is only as good as how it makes you feel — plus the product.”

Broadway star Ariana DeBose performed sunny jazz standards as A-list models like Kendall Jenner and Gigi Hadid walked the runway in the designer’s latest take on the classic American uptown uniform: flirty cocktail dresses in high waists and full skirts, lace sheaths and voluminous trench coats — all largely devoid of logos and much of it in black or white.

Kors has always sold a designer collection but is better known for its mid-priced Michael Michael Kors line, sold everywhere from Macy’s to the off-price chain Marshalls. It was that cheaper line, specifically the handbags, that not so long ago seemed to be worn by every woman in America.

For Kors, the runway collection, often priced at a couple of thousand dollars versus a couple hundred at the main line, is the halo meant to sell the vision that underpins the sunglasses, watches and satchels that power the empire.

“Globally people want to embrace showing off the body,” said Kors in a preview before his show, explaining one of a few nods to current trends in the frequency of cutouts or bra tops and crop tops.

But it’s going to take more than supermodels and celebrities to get Kors’ customers to follow it to where it wants to be.

“We’ve reset the business,” Idol said recently to analysts. “We’re only focused on our expectations: [a] more profitable business, growing in a way that’s really focused on full-price sell-throughs and growing categories, not just accessories.”

Idol is adamant the brand won’t return to its discounting habits in the main line (it has its outlets for that, which represent more than a third of the brand’s total store network).

“We’re going to raise prices again for [the] spring season next year — prices are going to go up considerably,” he said recently to analysts.

You can start to see it in the mid-priced handbag assortment available on the brand’s website, where prices top out at just under $800 versus just under $400 a year ago. It’s not just seasonal items that are going up. The brand’s large logo “Eva” tote is now $258, up from $228 three years ago.

Kors isn’t the only one. The average discount offered by Kors, Kate Spade and Ralph Lauren in August 2021 was 35 percent off versus 42 percent in 2019, with the average price of goods sold increasing six percent during the same time period, according to retail tech firm Edited.

But where the brand’s ads once mimicked its luxury rivals, featuring sinewy fashion models in unnaturally perfect lighting, now they feature pop culture celebrities, from Jennifer Lopez and Megan Thee Stallion to comedian Rickey Thompson and drag star Utica Queen, creating meme-friendly content. Many of them appeared in a retro-style “Coach TV” segment that opened the runway show Friday. The message: Coach isn’t a fancy Parisian luxury house and won’t pretend to be.

“At certain times, we have placed too much focus on the customer we wanted and not enough on who our customer actually is and what we as a brand stand for,” Kahn, the brand’s CEO, said in a call with analysts in 2020. 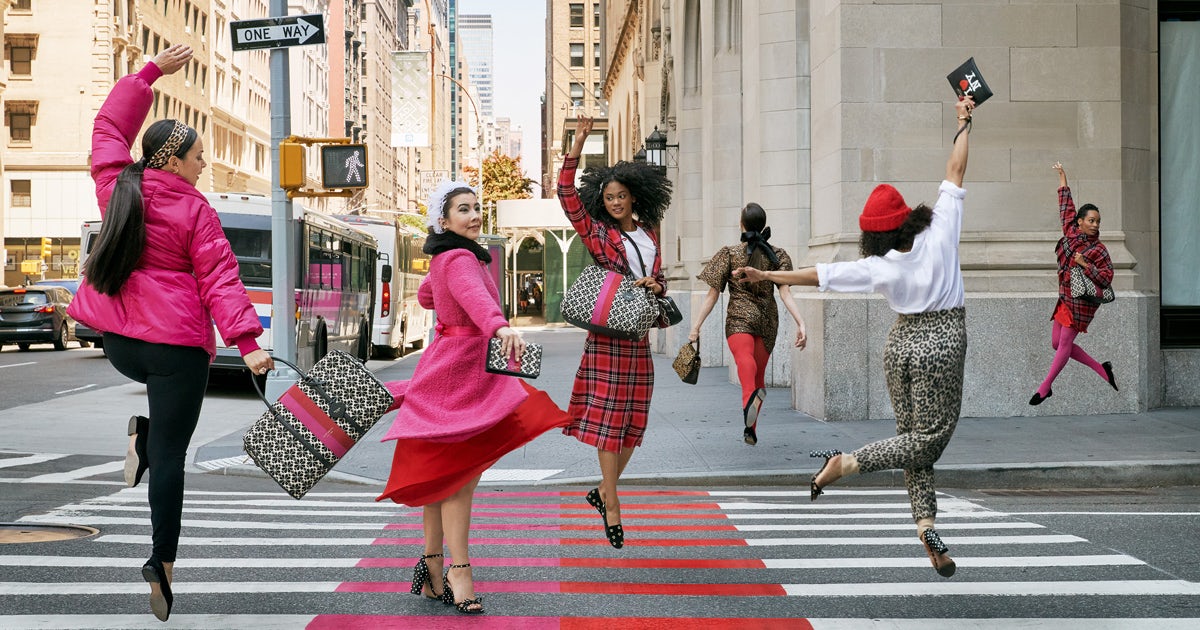 The strategy is showing signs of success, with interest in Coach up 36 percent between 2018 and 2020, according to data from Lyst.

Coach and Kors are also in the process of leaning harder on logos and signature patterns — a sign that customers are ready to openly wear them again. At Kors, pieces featuring logos surpassed 30 percent of the assortment in the most recent fiscal quarter. Idol and other leaders have said the goal now is to have “signature” products represent 50 percent of total sales.

Meanwhile, Coach sister brand Kate Spade is pushing a new logo of its own: a jacquard flower pattern made up of spades that it first introduced last year, but is the central focus of its fall campaign and product line up.

It’s one way the brand is aiming to redefine its identity after several tumultuous years of challenges, especially since Coach Inc. acquired it in 2017, when it often felt far from its heyday as the next generation working woman’s it-bag brand. This past spring, Kate Spade said goodbye to its creative director Nicola Glass, replacing her with an “ideation studio” group structure.

“We’ve really taken a look at every single product category that we offer,” said chief executive Liz Fraser, adding that the spade flower print is selling at a “much higher [average price] than we’ve been the past couple of years.”

Meanwhile, the brand has pulled back on ready-to-wear, putting more emphasis on the handbags and themed “novelty” accessories the brand is known for, designed to bring back formerly devoted clients.

As fashion week, instead of a runway show or presentation with mostly fashion industry guests, the brand opted for something more customer-friendly. It built an Instagram-ready apple orchard in the Meatpacking neighbourhood of Manhattan. Among the apples are pieces from the brand’s New York-themed accessories, featuring Milton Glazer’s famous graphic designs, atop a wooden platform covered in the spade print.

Over at Tory Burch, the strategy is to fill out the details of the brand’s DNA.

The brand opened its newest store in Soho this month, part of a new retail strategy focused on creating more curated, homey spaces for shoppers, full of personal connection to its founder and her taste for antiques and American craftsmanship, like wicker honeycomb shelves inspired by Burch’s bee apiary at her home in Antigua and a circular sofa covered in vintage quilts the designer sourced herself. 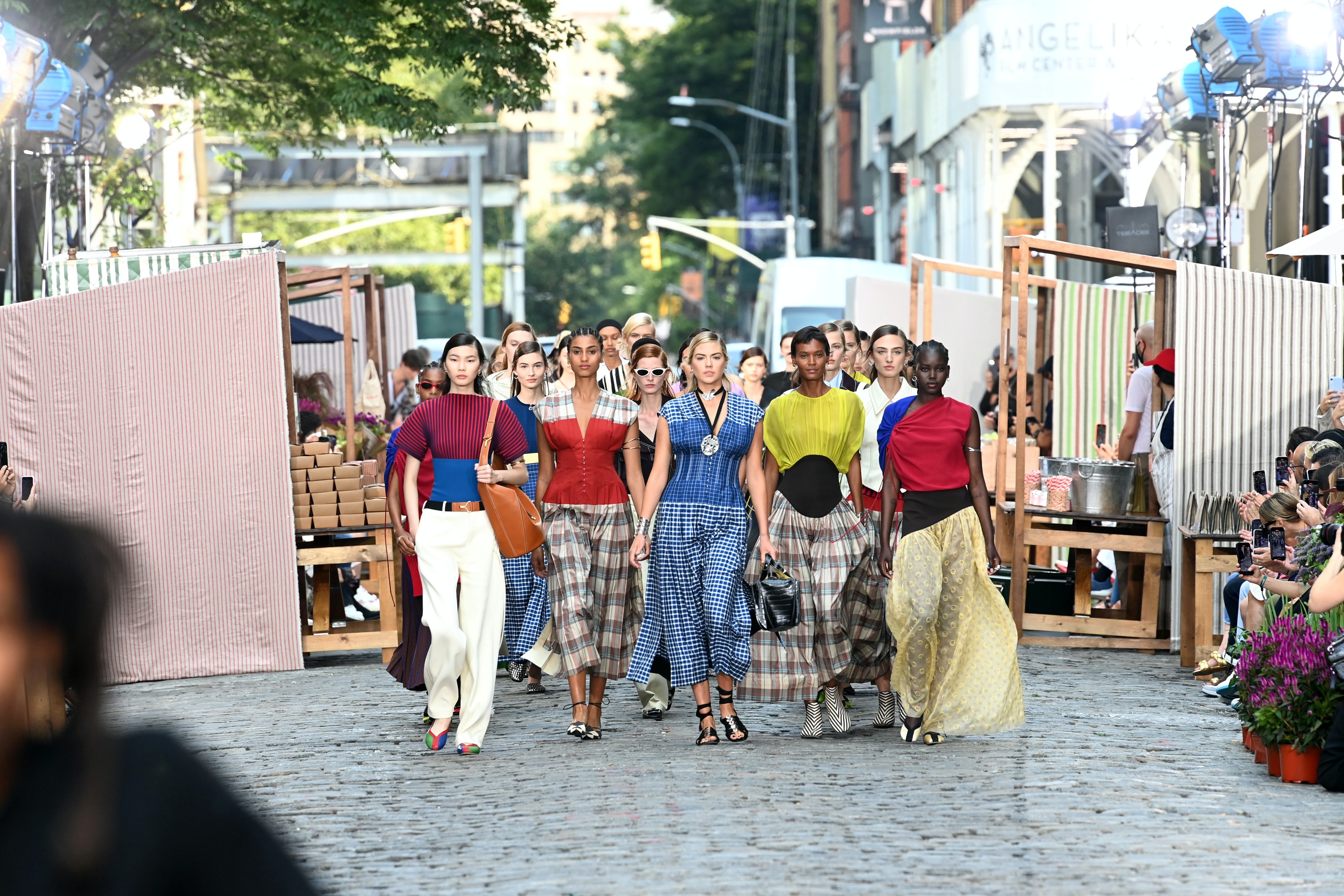 Tory Burch, which remains private and founder-led, has benefited from selling direct-to-consumer from the start while diversifying its product offering in a smart way. Burch said she also benefited from having more time to focus on the creative side of the business since her husband, Pierre-Yves Roussel, took over as chief executive officer two years ago.

Its Tory Sport line, available only online, stands apart from other modern activewear labels by leaning into preppy activities like tennis and golf — both of which are in the midst of cultural revivals as younger generations sought outdoor activities during lockdowns. And the new Soho store is the first to have a space for Burch’s growing home category.

“I’ve always wanted to be the most inspiring company, not the biggest company,” said Burch on Sunday morning after debuting her latest collection.

For her return to New York Fashion Week, Burch shut down the entire Soho block in front of her newest store to host an outdoor marketplace-cum-fashion show — complete with coffee and flower stands and its own logo. The event demonstrated an attention to detail and clear understanding of her brand and its identity that has served Burch’s business well — and kept it interesting years after the first wave of buzz subsided.

The moves accessible luxury brands have made over the last year bodes well for their future, especially if consumers continue to shop online in the numbers seen during the pandemic, said analyst Jane Hali. And if they continue to sell fewer, better products that speak directly to what makes these brands different and desirable.

“The retail space right now looks to me the way it should have looked, way before,” said Hali. “You’re not bombarded with inventory.”

But sharpening a brand’s point of view should be, by definition, alienating to some — and a difficult balance for brands that scaled by offering something for everyone.

“Exclusivity and authenticity are actually two ways of describing the same agenda: they both mean catering to a specific group of people, which means keeping other people out,” said Simeon Siegel, an analyst at BMO Capital Markets. “The hardest challenge is to marry exclusivity and distribution.”

Versace’s New Owner Plans to Build America’s Answer to LVMH. It Has a Long Way to Go.