TEL AVIV, Israel — “Tel Aviv is a very inviting environment to be creative and it really inspires collaboration.” So says Emily Whyte Meridor, a JP Morgan banker-turned-fashion merchandiser who, two years ago, moved to Israel from New York, where she met Leonora Fuhrer and Sivan Moshkovitz, the co-founders of accessories brand Complét, through friends. She joined the pair’s fledgling business this past July as sales and marketing director.

Tel Aviv certainly has a history as a fashion hub — albeit a remote one. Known particularly for its swimwear design talent and the success of its textile industry during the '60s, '70s and '80s, the city's fashion week plays host to over 20,000 buyers and press and is also home to the Shenkar Institute of Design, the alma mater of Alber Elbaz, along with Complét’s Fuhrer and Moshkovitz. But today, while Tel Aviv is known as one of the world’s more hipster cities, the market presents limited opportunities for young, independent labels to grow.

Complét had enjoyed some local success with its backpacks and clutch bags, distinctive for their hoop handles and digitally-printed leather, generating early revenue from private sales and a few wholesale accounts in Tel Aviv.

I think that we're trying to stay loyal to ourselves. Our aesthetic isn't for everyone.

But in order to grow, it needed a global presence: “Big high street retailers reign supreme and young designers struggle [in Tel Aviv],” says Whyte Meridor, who cut her teeth at Diane von Furstenberg in New York and Kenzo in Paris. “[Retailers] don't buy collections in advance so it's a different model compared to other cities.”

“Things are on a different schedule,” adds Fuhrer, who is the brand’s creative director. “Everything is, ‘you see it now and buy it now’ and nothing is planned in advance.”

Additionally, Tel Aviv’s proximity to the West Bank and Gaza has made it vulnerable to attacks. “We were very much affected by some conflict events and it was the breaking point — we realised that we could not rely on the instability here,” Fuhrer says. 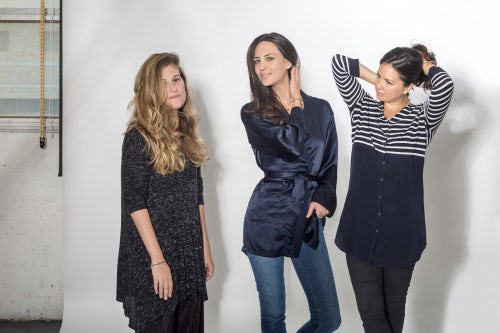 Meanwhile, in New York, a new accessible luxury category had been emerging in the handbag space, led and dominated by Mansur Gavriel, whose unfussy-yet-luxurious bucket became the first post-recession “It” bag. “Mansur [Gavriel] changed the game,” says Whyte Meridor. “They paved the way [for independent accessories labels] to stand on two legs firmly with the big brands.”

But can Complét generate the same kind of influencer buzz and sell-out success from Tel Aviv?

To thrive in this competitive space, you need to be a triple-threat, believes Whyte Meridor. “You have the quality, the individual style and the price-point. It's a hard thing to combine and execute in a desirable product,” she says. 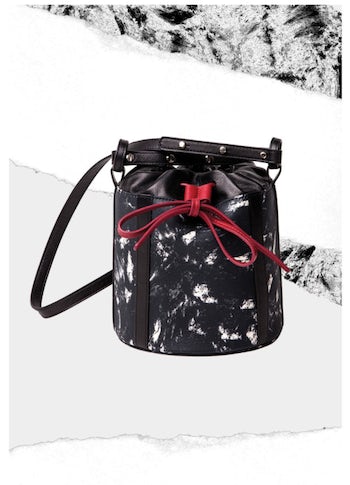 Complét’s handbags are designed to marry all those attributes. The bags combine structure and ease with their geometric silhouettes. Crafted in calfskin in restrained seasonal palettes, the leather is often digitally printed with painterly brushstroke motifs. And the pricing hits a sweet spot too, selling for between $260 for the Alma pouch to $875 for the printed Eve backpack, a style that has become a press favourite and the label’s biggest seller on its e-commerce site.

But the brand’s Israeli manufacturers were not hitting the mark in terms of quality when Whyte Meridor joined the Complét team in July 2016. “We wanted to grow internationally and sit next to other designers, [but] to be there we needed to find a [manufacturer] that [could deliver] the same quality,” explains Moshkovitz, the brand’s head of design and development. Initial seed funding of $100,000 enabled the company to shift its manufacturing base to Italy, where the label’s bags are now being made in the same factory as Mansur Gavriel.

That effort, along with an improved e-commerce site to expand direct-to-consumer distribution, has already paid dividends. While Fuhrer, Moshkovitz and Whyte Meridor declined to disclose revenue, Complét has enjoyed 40 percent year-on-year growth over the past 12 months, and it seems they are yet to even hit their stride.

October 2016 saw the brand’s first launch into the global wholesale market, appearing at the Boon showroom in Paris, where the collection caught the eye of Stylebop’s head of womenswear, Coco Chan.

“I think that one of the standout elements is the use of colour and print, which sets [Complét] apart from a lot of other collections,” Chan told BoF. “[The] more unusual shapes as well.”

Chan remarked that while comparisons to its accessible luxury peers are unfair, “Complét fits in with that new generation of brands like Mansur Gavriel and Manu Atelier who have really focused on that £500-700 price point.”

However, the women behind Complét believe that competition is healthy for their brand. “I think for us, it's good. Good competition is good. We want everybody to succeed,” says Moshkovitz, who adds that the Complét customer is looking for something beyond the usual crowd-pleasers.

“I think that we're trying to stay loyal to ourselves,” Moshkovitz says. “Our aesthetic isn't for everyone, it's not commercial in a way that everybody loves it.”

For Complét’s first ever campaign, for the Spring/Summer 2017 collection, the brand has enlisted Paris-based music artist Petite Meller as its face, and Michal Chelbin, who shot Dior Homme’s Fall 2016 campaign, to photograph her.

The Eve backpack’s central zip is a key element of Complét’s aesthetic, and so for this month’s Spotlight, the team reimagined the BoF logo with a central zip across the ‘O’.