ooo1, Kiko Kostadinov's debut collection for Mackintosh, centred on the concept of 'rubber', which is used to seal the seams of the traditional mac overcoat | Source: Courtesy
Luxury
Share
2 Comments
By Osman Ahmed June 7, 2017 06:00

LONDON, United Kingdom — When Charles Macintosh, a Scottish chemist, devised a way to rubberise cotton in 1823, he provided a much-needed solution to his motherland’s notoriously wet climate. The weatherproof fabric would become synonymous with his name (the K came later) and, today, Mackintosh’s long overcoats remain a sartorial antidote to drizzle or downpour. Yet the company is more closely associated with Cumbernauld — the town halfway between Glasgow and Edinburgh where 60 people produce its outerwear — than cool.

The solution: 27-year-old creative director Kiko Kostadinov, a Central Saint Martins graduate and London-based menswear designer, who presented his debut collection for the brand at men’s Paris Fashion Week in January. The debut was concept-heavy, with the theme centring on rubber (the smell permeated the space). It was also dark, with an all-black line-up that had a sense of boxiness or slouch, and an emphasis on exposed construction. “We’ve carried Mackintosh in our store for years because we love the product,” says Simon Hogeman, the co-founder and buyer at Très Bien, a contemporary boutique in Malmö, Sweden. “The hard part was to maintain the interest because it was just that: products. It felt like [Kiko] got to do exactly what he wanted in terms of cuts, designs and style – to me, it’s a really cool and bold move from Mackintosh."

Federico Barassi, menswear buying director at Ssense, is equally impressed. “What initially drew me to Kiko's work was his focus on reinterpreting the utilitarian uniform with contemporary, ultra-technical designs,” he says. “Pairing this approach with a staple in menswear like Mackintosh provides the opportunity to do something a bit more directional and relevant but with real value for the consumer.”

“No one else can produce what we are doing,” explains Andrea Austoni, who joined Mackintosh as global commercial director from Vivienne Westwood last year. “These big brands can’t do it and that’s why they come to us, and the collaborations in previous seasons started to re-position the brand and so we thought, how can we push this and embrace a new audience and new categories?”

The result, he says, was hiring Kostadinov to create a new line as the brand’s first-ever creative director. Kostadinov’s 0001, which is approximately 20 percent more expensive than the commercial mainline, is a full collection of outerwear, tailoring, shirting, knitwear and accessories, and will be stocked in influential retailers such as Dover Street Market, Ssense, Browns, Opening Ceremony, and LN-CC.

“We liked the fact that it is a 200-year-old brand with a new designer,” Austoni adds, explaining that he aims to expose the brand to a more fashion forward client without diluting its original appeal. “We want to keep this equity of our clients who may just be looking for a handmade rubberised cotton coat to wear over a suit, and we are adding to it.”

Mackintosh is owned by Japan’s Yagi Tsusho group and the rebranding coincides with the opening of new retail spaces in Tokyo and London, with an 1,135-square-foot flagship on New York’s Madison Avenue set to follow later this year. The company is also launching a new e-commerce platform in partnership with Farfetch and Austoni says the overall business currently generates about £40 million ($51.8 million) in annual sales revenue at retail value.

For Kostadinov, beyond the appeal of a paycheck, Mackintosh has two factories with no shortage of expertise. His own namesake label, which he shows at London Fashion Week Men’s, focuses on cleverly constructed garments that take their cue from uniforms and workwear, so the utilitarian feel of the factory and its output were natural lodestones for him. “It’s not like they only want to do the things they know,” he says of the factory workers. “They have young people in the factory and they are excited and eager to do new things. They’re never judgemental and they like to prove that they can do it, even if it’s difficult.”

There was also the fact that there were no shoes to fill, allowing him carte blanche in terms of creative vision and establishing a relationship with the craftsmen. “The beauty is that there is no history — they haven’t had a designer and I haven’t worked for another brand in this way,” explains Kostadinov. “But that means I can’t say that the Mackintosh person likes to drink a certain type of water or reads the Financial Times, or anything like that,” he continues. “It’s still so early and it’s interesting to see how people respond. When we build the initial customer base, we can develop that into more character-based collections. For now, we are focusing on a material concept each season.” 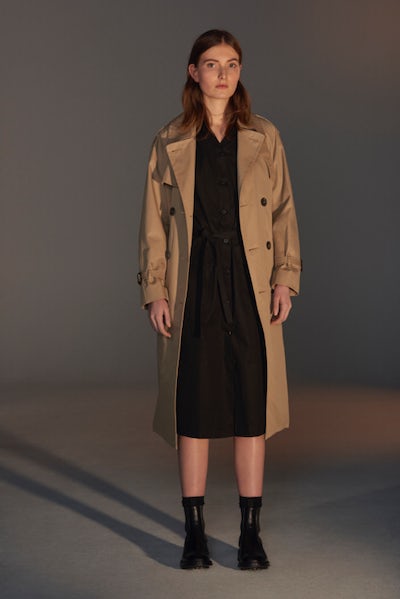 In his first collection, rubber manifested itself in unexpected ways, with the taped seams usually found on the inside of a Mackintosh blown up to bigger scale and used to give weight and structure to artfully baggy trousers on the hems or cuffs, or on the back of a sleeve of a severely tailored jacket. “It came from thinking, how do you apply something so classic and done everyday in the factory in a new way?” says Kostadinov. “It’s what they do every day, but ten times more developed.” What differentiates his approach to Mackintosh from his own label, he says, is an emphasis on product and material, rather than character-based narrative and ephemeral themes, such as subcultures or music. “It’s like two babies — my one and then this one,” he smiles. “They grow at the same time, but with Mackintosh, it’s the product. I want to build the wardrobe and the quality of the product to attract people.”

Austoni and Kostadinov are keen to expand the product categories and create a full wardrobe, however Kostadinov stresses that they are taking it slow and looking to new fabrics and manufacturers in Italy and Japan to make the items that their own factories are unable to make. “You open Pandora’s box and you have everything, from sunglasses to belts and it can become confusing,” says Kostadinov, whose next collection will abstractly centre on ‘glass’ as a narrative material. “For me, the core is the beautiful outerwear which I want to make the star of each collection. The rest completes it.” However, he is quick to assert that what allows them a unique point of view is that Mackintosh is a heritage brand without the shackles of staying in its own lane. “When a customer goes to Mackintosh, it’s good to have a full wardrobe because the fabrics they’ve been introducing since the rebranding are very modern, like the Loro Piana ‘Storm System’ waterproofing fabric, or cashmere-wool. You wont see Burberry or Aquascutum or Dunhill using those fabrics because they’ll stick to British mills and what they do.”

With a slew of British heritage brands working hard to promote the traditional aspects of their production and history, Mackintosh could be at an advantage by embracing a more modern approach. In September, it will launch at a selection of buzzy retailers, as well as a brand new e-commerce platform. As far as perceptions go, it doesn’t get cooler than that.

Barbour and Belstaff: A Tale of Two British Heritage Brands