PARIS, France — When Virginie Viard staged her first Métiers d’Art show as Chanel creative director in December, she styled it as a homage to the brand’s heritage and founder.

The collection was presented on a set co-designed by Oscar-winning filmmaker Sofia Coppola, evoking Coco Chanel’s legendary 31 rue Cambon apartment and the chandeliered salons below. Models including Gigi Hadid and Kaia Gerber travelled down a replica of the mirrored art deco staircase in looks evoking the famous address. A mix of vampy black with cinched gold waists, power shoulders and midriff-baring; all intended to showcase the skills and craftsmanship of Chanel’s specialist ateliers.

This Summer, Chanel planned to transplant the presentation to Beijing in late May and London in early June as part of an opulent marketing push intended to engage with local markets on a different level.

It’s a playbook that has delivered dividends for the brand in the past, bumping up local engagement and sales, according to Chanel. But it’s had to scale back ambitious plans for this year amid growing concern over the coronavirus outbreak in China. For now, Chanel’s plan for a Beijing show is on hold, with much of the country still on lockdown and little certainty over how the situation will develop in the coming months.

The strategy is a nod to the new demands of fashion.

Despite the setback, the show in London is expected to go ahead as planned.

The strategy is a nod to the new demands of fashion. As brands target an increasingly globalised and experience-driven marketplace, local touchpoints are increasingly important to cater to valuable international customers, keep up with social media’s relentless demand for fresh content and adapt to a world in which consumers no longer buy clothes based on a strict seasonal calendar. The impact of such extravagant local touchpoints can be significant.

Replica shows are usually accompanied by a host of other activities to drive customer engagement, including parties, in-store activities, local influencer partnerships, and a flurry of specialised content on local channels, like WeChat in China. Invites are focused on local press and customers who might not have the opportunity to attend Chanel’s Paris shows.

After Chanel recreated 2018’s Métiers d’Art show — originally staged in the New York Metropolitan Museum of Art — in Seoul last year, it experienced its best ever ready-to-wear sales in the country, the brand said. A staging of Chanel’s globe-trotting exhibition, Mademoiselle Privé, in Shanghai last year generated nearly 4 billion digital touchpoints, while the company’s cruise replica in Chengdu in 2017 was tagged 560 million times on Weibo. 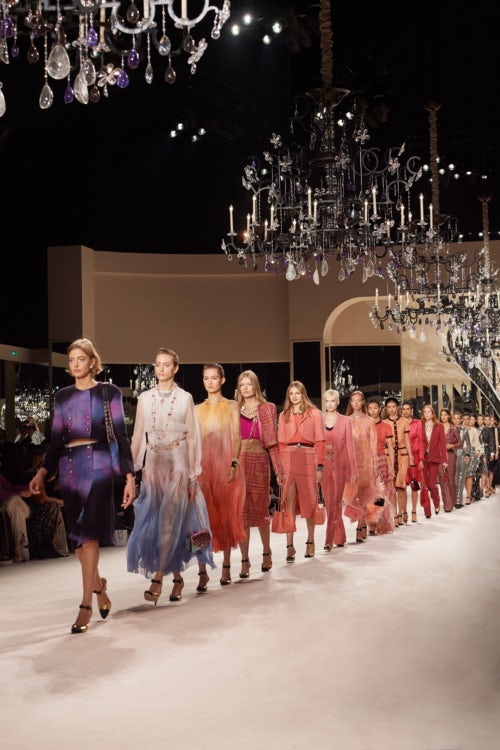 “These collections are privileged moments to create links with the people we are going to visit,” said Bruno Pavlovsky, president of Chanel SAS and of fashion activities at Chanel, during an interview held just before January’s haute couture show at the Grand Palais.

Chanel excels at such moments. The brand is known for its show-stopping events and canny ability to create differentiated marketing moments in a crowded space. Under Karl Lagerfeld, who passed away last February, the brand pioneered elaborate off-season shows, taking its Métiers d’Art and Cruise collections on globe-trotting jaunts.

The blockbuster events were part of Lagerfeld’s genius for re-devising the fashion model with aspirational events that sell the dream to consumers, who in many cases engaged with the brand through more accessible products like fragrance and makeup.

For decades, it’s proved a recipe for stratospheric success even as others have sought to replicate the model.

Chanel is one of the world’s most successful fashion brands, despite lacking the scale of luxury conglomerates like Kering and LVMH. In 2018, the company, which remains privately owned and controlled by the secretive Wertheimer family, published its results for the first time, revealing revenue of nearly $10 billion in 2017. In 2018, that number rose to more than $11 billion.

Though critics have raised concerns about the brand’s resistance to e-commerce — it still only sells beauty products, fragrance and eyewear online — and the broader relevance of old-school luxury for the more egalitarian and values-driven consumers coming up in Gen-Z today, Pavlovsky said he doesn’t see a reason to diverge from Chanel’s tried-and-tested show playbook.

“It’s our fashion. It’s our way,” said Pavlovsky. “I don’t know if it’s old-fashioned, but it seems to be still quite successful.”

Chanel’s London replica will take place on June 4 in Old Billingsgate, a grand Victorian Building in central London. The company is continuing to closely monitor the situation in China, where other brands are struggling to manage the situation too. Last week, Shanghai Fashion Week announced that it would postpone China’s most prominent fashion event — originally slated to start on March 26 — without saying when, or even whether, the event would be rescheduled. Meanwhile, Gucci-owner Kering said it has closed half its stores in China and postponed new openings and advertising campaigns there.

I don’t know if it’s old-fashioned, but it seems to be still quite successful.

For Chanel, this is the second set-back in efforts to stage blockbuster events for the vital Chinese market in the space of six months. Last year, it postponed plans to restage its 2020 cruise collection in Hong Kong because of ongoing political upheaval.

"Decisions to postpone our events are taken in close consultation with local teams and in total solidarity," Chanel said in an email, noting that the delays were as a result of events beyond the brand's control. "We are confident that we will have further opportunities ... at a more appropriate time," the company said.

On the flipside, London is just emerging from a period of political upheaval caused by Brexit, though that did little to dampen the city’s luxury market. With greater certainty in place over the country’s status, Chanel is looking to connect with London’s sizeable luxury customer base.

“We have not done London for a while,” Pavlovsky said. “I think it makes sense at this moment, with Virginie Viard, with this Métiers d’Art collection, which is about the DNA of the brand.”

The issues in both markets reflect the growing complexities for brands operating in a fractured and fractious global market at a time of geopolitical and environmental upheaval, which can increasingly mean adapting to situations beyond the company’s control.

“We are operating in many countries in the world; the situation is changing all the time on a political point of view, economic point of view,” said Pavlovsky. “We should not focus on that. Our focus is more how to be able to offer the best of the brand to our customer.”

Editor's Note: This article was revised on 18th February, 2020. An earlier version of the story misspelled Bruno Pavlovsky's name in places.

Related Articles:
The Future of Chanel
Chanel’s Year of Change