The New York-based Uruguayan designer succeeds Natacha Ramsay-Levi at the Richemont-owned label, bringing a track record of success in handbags and a passion for eco-friendly practises.

The New York-based Uruguayan designer succeeds Natacha Ramsay-Levi at the Richemont-owned label, bringing a track record of success in handbags and a passion for eco-friendly practises.

Chloé's new creative director is Gabriela Hearst, the New York-based designer known for her elegant ready-to-wear collections, success in leather goods and a fervent commitment to sustainability. She succeeds Natacha Ramsay-Levi, whose exit was announced last week. Hearst will present her first collection for the Richemont-backed brand in March and remain the creative director of her namesake label.

The designer’s success with handbags — her “Nina” style has been a hit in an era where few new “it” bags have emerged — made her a leading candidate for Chloé. The label developed a significant accessories business under the direction of former designer Clare Waight Keller but Ramsay-Levi, a protégé of Louis Vuitton designer Nicolas Ghesquière, failed to push the critical category forward as competition in the accessories market increased, with luxury groups LVMH and Kering beating out other labels for prime department store floor space and standalone retail locations.

While the Switzerland-based Richemont has seen continued success in the “hard” luxury segment, with Cartier and Van Cleef & Arpels driving the majority of its profits, it has failed to successfully develop the “soft” luxury labels it owns, including Chloé and Alaïa.

Analysts estimated that Chloé was generating more than €500 million in the fiscal year ending March 2019, and posited that it could be transformed into a billion-euro business.

The appointment of Hearst — following the arrival of chief executive Riccardo Bellini, who joined from Martin Margiela in late 2019 — signals that Richemont is once again set on further developing the ultra-feminine Parisian brand, which has a unique history. Its founder, Gaby Aghion, is often credited with coining the phrase prêt-à-porter — or “ready-to-wear” — and helped usher in a new era of French fashion where ready-made clothes were seen as luxury. Other than longtime creative director Karl Lagerfeld, all of its designers have been women, including Phoebe Philo, Stella McCartney and Waight Keller.

Along with accessories acumen, Hearst will also bring her well-documented sustainability practice to Chloé. Bellini highlighted Hearst’s “powerful vision of more responsible fashion” and “vibrant creative energy” in a statement announcing her appointment. 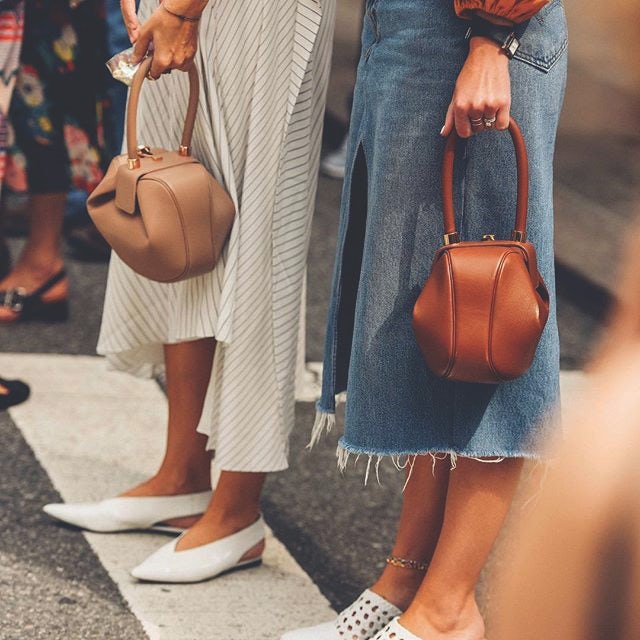 Hearst, who is originally from Uruguay, started her namesake label in 2015 after more than a decade running the contemporary label Candela, which she co-founded in 2004 and, as of 2019, operated without her as a private-label business. She is as well known for using high-end materials that are often recycled or dead stock as she is for her sharp tailoring. She also made the savvy decision to only sell her hard-lined, geometric handbags directly to consumers. When they became a hit, her business reaped the benefits as she was not only able to better manage supply and demand but also maximise profits.

Her “slow luxury” approach has not only resonated with fashion editors and celebrities but also shoppers. The brand reportedly generated between $15 and $20 million in sales three years after launch, when handbags represented half of all sales, as did direct-to-consumer purchases. Hearst opened her first store in New York in 2018, followed by another in London the following year, and made her Paris Fashion Week debut in September.

Hearst’s lead investor is her husband, publishing heir Austin Hearst, whom she married in 2013. In 2019, LVMH Luxury Ventures — an investment arm of the French conglomerate that makes bets, usually under $1 million, in entrepreneur-led businesses — took a minority stake in the label.

Rival Richemont will now look to Hearst to shake up its struggling fashion and accessories business in a luxury market dominated by bold, Instagram-friendly statement pieces and streetwear-inspired collections. While Ramsay-Levi’s designs were well-liked by industry insiders, the brand’s heat with consumers cooled under her watch. Rumours about Ramsay-Levi’s exit, and Hearst’s appointment, spiked in recent months.

“A lot of the issues at Chloé have really nothing to do with the designer; they have to do with distribution, marketing, and promotional activity,” Zuzanna Pusz, UBS luxury analyst, told BoF last week.

Richemont doesn’t seem to be willing to give up on soft luxury, even though analysts have suggested that the group should let that part of the business loose and sell off Chloé to a competitor with the means to accelerate growth, such as Kering. However, Chairman Johann Rupert has repeatedly poo-pooed this notion. The group has further underscored its commitment to soft luxury by partnering with former Lanvin designer Alber Elbaz on a new label, and there were rumours that it would do the same with star designer Phoebe Philo, who has been on hiatus since stepping down from Céline in 2017.

But can Richemont make Chloé work? It will take vision from Hearst, operational knowhow from Bellini and investment from Richemont.