How the trio behind the London label navigated a split with Kering and beat the pandemic by betting on merch line More Joy. 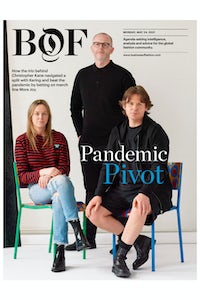 How the trio behind the London label navigated a split with Kering and beat the pandemic by betting on merch line More Joy.

Fifteen years after launching his namesake label with a collection of neon bandage dresses, Christopher Kane has seen both highs and lows.

Named designer of the year by the British Fashion Council a year out of Central Saint Martins, Kane was championed by Vogue and Donatella Versace for his mischievous and sexy approach to fashion before Gucci-owner Kering bought a 51 percent stake in the high-potential label in 2013. Sales grew and two years later the brand opened a flashy store on Mount Street in London’s Mayfair.

But despite its new backers, the label never surpassed £10 million in annual revenue and, in 2018, Kering sold its stake in the company back to its namesake designer and his sister and co-founder Tammy Kane as part of a wider portfolio review that included the disposal of ethical label Stella McCartney.

The breakup was tough. Without the support of a big group, the darling of London fashion was forced to fend for itself as a sub-scale designer label in a luxury market increasingly dominated by megabrands. Then came Covid-19.

“Nothing surprises us anymore,” said Kane, who with Tammy and chief executive Barry Mulholland, spoke to BoF about the ups and downs of the last three years.

The business was forced to cut staff and close its London store last year, accelerating a streamlining that began with the Kering separation. But there was a silver lining. Answering only to themselves, the team was emboldened to take a risk on a new project, turning a seasonal experiment with T-shirts emblazoned with the slogan “More Joy” into a multi-category lifestyle brand that has stabilised, transformed and, in some ways, liberated the business from the traditional fashion system.

“Before, it was always the rat race,” said Christopher Kane. “There were all these formulas, you had to tick the boxes, and... who made these rules up? Actually, I pay my wages, I should be setting the rules.”

There were all these formulas, but now I pay my wages, I should be setting the rules.

Today, the More Joy brand offers everything from Breton shirts to vibrators to umbrellas, imprinted with keywords inspired by the seminal 1972 lovemaking manual by Alex Comfort, The Joy of Sex, set in the book’s signature Optima typeface: “Special,” “Sex,” and, of course, “More Joy.”

The products are simple and both easy to produce and consume. They retain a cheeky, subversive factor that recalls Christopher Kane’s runway collections. But the brand is more “merch” than high-fashion. Everything retails for under $500.

“I just never thought, 24 months ago that I’d be having a conversation about reorders on doormats,” admitted Mulholland, who said More Joy’s home goods have been especially popular, buoyed by a year of intermittent lockdowns.

Today, More Joy has significant momentum. “We could see More Joy exceeding the sales of Christopher Kane in the long term based on its early demand and the fact that it has a wider reach,” said Mulholland.

“We are still very much figuring this out,” said Tammy. “But we just have this really great feeling about it.”

Mulholland had been involved with Christopher Kane from its inception, helping to price its first collection from a bedroom in East London and later serving as its chief financial officer, but he exited the label after Kering installed its first chief executive in 2014.

As the label struggled to scale, Kering cycled through three CEOs — Alexandre de Brettes, Sarah Crook and Nikolas Talonpoika — before disposing of its stake. 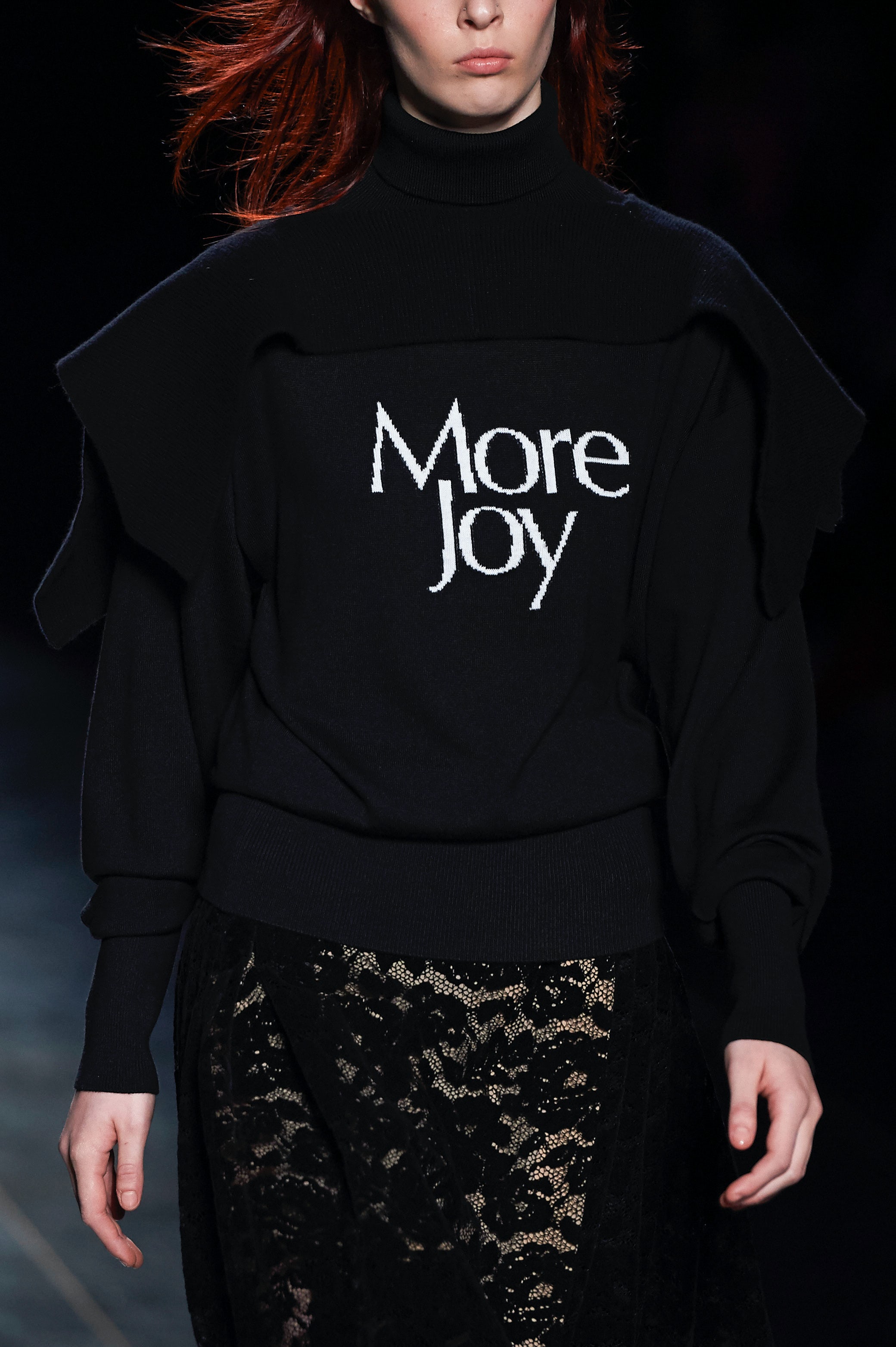 When Mulholland returned to the label as chief executive officer in late 2018, he was uniquely prepared for the role: he was the interim chief financial officer at Stella McCartney as it navigated its own exit from Kering earlier the same year.

Mulholland got to work returning the label to a similar structure to the one he had set before it added new product categories and collections, shuttering its men’s and handbags lines and trimming a team that had grown to more than 60 people.

“When you’re part of the big group, they have a tendency to overload on the overhead,” he said. “A lot of people go, ‘How did you cope with the [streamlining]?’ But for me, there wasn’t a change, because the business I left was an independent one.”

“We really yearned for that again,” added Kane.

The first incarnation of More Joy took shape when Christopher Kane was still part of Kering. The designer incorporated illustrations and printed words from Comfort’s The Joy of Sex into a provocative Autumn 2018 collection that explored eroticism. By the time the collection hit stores — including a line of oversized T-shirts that read “More Joy” and “Sex” — the split with Kering was already underway. For Christopher and Tammy Kane, the slogan quickly became a daily mantra.

“It was definitely this moment when we needed more joy in our life,” said Tammy Kane.

Christopher and Tammy Kane soon recognised More Joy could be much more than a seasonal T-shirt project, and something more modern than a typical diffusion line.

“This is a proper business with huge potential, not just in fashion, but in lifestyle, and experiences, hospitality, and there’s so much we can do with More Joy,” Tammy Kane recalled telling Mulholland while in Paris in October 2018.

It was a welcome thought for Mulholland, who said that while Christopher Kane had long established a reputation for delivering new design ideas, he was “always crying out for something that didn’t disappear” each season to help the business scale.

While the label was known for its figure-hugging dresses and embellished sweaters, it lacked the kind of perennial it-products that luxury labels typically rely on for most of their revenues.

Without the pressure of external investors, (the split with Kering took effect in February 2019, and today Christopher and Tammy Kane have split ownership of the business), Christopher Kane was able to not only take a risk on a new business line, but take the time to test the strategy and then act quickly when it proved successful.

“It gave us the agility to move fast when we were ready,” said Tammy Kane. In July 2019, More Joy relaunched as a separate brand with radically different products and price points to the original Christopher Kane ready-to-wear label. And the team soon expanded the offer beyond T-shirts to mugs, blankets, scarves and phone cases, later adding floor mats, vibrators and umbrellas.

For the first year, More Joy was only available via Christopher Kane’s website. On Instagram, the label had its own account, mostly reposting user-generated content featuring the young artistic community that was the first to gravitate to the label and its slogans.

The “More Joy” mantra gained new relevance when the pandemic hit — as did the importance of its business model. Like many of its ready-to-wear peers, Christopher Kane suffered severely as retailers cancelled orders and consumer demand crashed.

The business had already cut costs when it split with Kering, which helped it navigate the sudden industry freeze but was forced to make further cuts. Today the company is made up of about 30 people, half its size under Kering.

The crisis also pushed the label to finally decide to close its London store, something Christopher, Tammy and Mulholland had already been considering for a year because of Brexit and falling foot traffic, but had thus far resisted over worries about how it would look externally. Pandemic lockdowns provided both a commercial trigger and better optics for their decision not to renew the lease.

“There’s been less judgment in the industry now,” said Mulholland.

The label also reduced its mainline collections from four to two per year, with each delivering the start of the pre-season, and added a bridal collection delivering each February. The ready-to-wear is still sold through Net-a-Porter, MatchesFashion, Joyce and others.

At the same time, the trio decided to invest in growing More Joy, which launched with Matches Fashion, Browns and other wholesale accounts in July 2020. In March, More Joy also started selling on the UK’s main Amazon marketplace and there are plans to expand distribution to Amazon’s other sites this year.

“We’ve launched More Joy on Amazon — not Amazon Fashion, but just on the general Amazon platform, because we want to reach people and reach them efficiently,” explained Mulholland. “For Christopher Kane, we are also looking at Amazon’s fashion platform now that this seems like a more acceptable way of delivering luxury.”

Today, Christopher Kane is a different kind of fashion business than it was before Kering, and before the pandemic. The team has no current plans to open physical stores or stage runway shows in the pre-pandemic mould. That model is working for few if any small designer labels in today’s digitally driven market.

Instead, More Joy has become a key focus. Though still a relatively small proposition, More Joy sales on ChristopherKane.com quadrupled in 2020, accounting for more than half of the transactions on the site. Apparel is More Joy’s best-selling category, but home goods like the doormat and wellness products — less like face cleansers, more like vibrators — are popular and will be expanded. The line will also explore featuring the “Special” slogan more, having focused primarily on “More Joy” and “Sex” thus far.

While More Joy has frequent releases of new products on its website, including an “April showers” themed release of a bucket hat, umbrella and raincoat, much of the offering will be available perennially to provide more predictable income.

“That’s never something that we’ve ever experienced before,” said Mulholland. “But it’s a nice place to be.”

While some retailers want exclusive and seasonal exclusives, he said More Joy would do these sparingly. “We’re going to go at our own pace,” he said.

Brand collaborations, however, are set to become a larger part of the strategy. In May, More Joy released its first: a collection of black, red and white sunglasses with LeSpecs. Next up is a pop-up shop at Selfridges opening on June 7.

Currently, Christopher Kane’s 30 employees work across both More Joy and the ready-to-wear line, but Mulholland said he hopes to build separate teams in the future. (More Joy was incorporated as a separate entity in June 2020.) And though the brands remain connected conceptually through the feel-good philosophies and cheeky personalities they share, as well as distribution partners, customers may increasingly miss the link when they see it on Amazon or Instagram.

“Ultimately, for me, that’s a wonderful thing,” said Mulholland. “Christopher Kane can still service that market to some extent, and you will naturally have that crossover.”

The ready-to-wear business, however, remains the top priority for Christopher and Tammy Kane. And as demand returns, they plan to increase volume and add more collections back to the schedule. But the simplicity of More Joy, and its growth, allows the main line to take more creative risks and worry less about following a merchandising formula.

“It takes the pressure off a brand like Christopher Kane having to dilute its creativity to cater to an audience,” said Mulholland. “It feels really fresh, and probably as exciting as it did back at the very start.”

What to Make of PPR’s Christopher Kane Investment

Kering to Sell Christopher Kane Back to Designer