LONDON, United Kingdom — A decade ago, shoppers were hard pressed to find a bikini or kaftan in store outside of May, June or July. By August only lonely, mismatched tops and bottoms were left on the shelf. By November, the task was impossible. How times have changed. Today, increased global mobility — meaning more frequent trips to sunny destinations — has created year-round demand for swimwear and brands and retailers have responded, driving significant growth in the category.

In 2014, the global swimwear market was worth $20.9 billion, according to Euromonitor International. By 2019, the firm expects this number to hit $28.3 billion. “Swimwear has become an apparel item to invest in,” said Bernadette Kissane, an analyst at Euromonitor. Indeed, a wide range of brands —from large luxury players to new specialist labels — have been targeting the category. 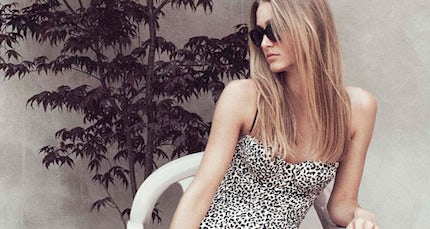 Anna Laub, founder and creative director of Prism, a brand that sells sunglasses, swimwear and other beach and travel-inspired essentials, said that, in the last 2 years, sales at the company have increased by more than 50 percent each year. And while holiday shopping peaks are levelling off, year-round sales are steadily rising, said Laub. “Of course the northern hemisphere for us is much busier during the summer months, whereas Australia is a great market for us in our winter — their summer — but we have good sales all year round: for example, November and December is a big holiday season for people now. Everyone wants to get away from the grey and get some winter sun.”

But as consumers travel more and more often, the swimwear category is expanding beyond bathing suits and espadrilles and giving birth to a new genre of holiday destinationwear that works as well in the city as on the sand and includes items like crochet shorts, palazzo pants, cotton kaftans, embroidered cover-ups, beach hats, canvas bags, bohemian sandals and fringed tunics.

Alongside increased mobility, the new category is also being driven by new digital behaviour, specifically the frequency with which consumers now share their holidays on social media. “Vacations are no longer quiet, serene escapes from real life, but rather a digitally documented life experience,” said Kissane, noting the growing need to create entire camera-ready outfits for holiday snaps. 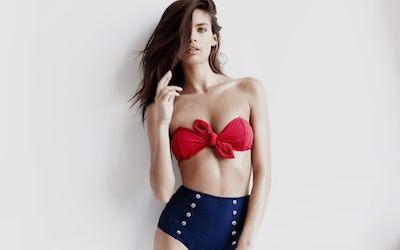 Retailers, too, have recognised this shift in the market, curating dedicated “vacation shops” that offer to fully outfit customers for their holidays. Currently, Net-a-Porter has nearly 500 items listed under ‘beachwear’ and a specially curated ‘vacation’ gallery of 282 items, including hats, sunscreen and bohemian leather and beaded bracelets. Matchesfashion.com has 638 products in its ‘beachwear’ category, as well as a dedicated ‘vacation studio,’ which appears in the main navigation of the site all 12 months of the year. Since its advent, the buying budget for this area of the site has increased by more than 400 percent.

Australian designer Nicky Zimmermann said her expansion into swimwear and beachwear, back in 1996, helped her grow internationally and, although ready-to-wear currently accounts for roughly half of her sales, “the swim clothing is one of the biggest growth areas for our business,” she explained. Interestingly, Zimmermann’s destinationwear has also found a foothold with customers who want to wear it outside of their holidays. “I think it slightly pigeon-holes it to call it beachwear,” said Zimmermann. “There is a total crossover in the way people are wearing it. Everything is so much more transeasonal these days. Twenty years ago, we were thinking how can we sell an Australian summer print at winter time? Now, it doesn’t matter. Girls in New York are buying our beach dresses year round and they’ll put a winter coat over it, they just want to wear the beautiful dress underneath.” Simone Zimmermann, her sister and business partner, agreed: “Our client might be buying something from the swim collections for a day wedding, as much as she is for a summer holiday.”

Fellow Australian designer Dion Lee is set to launch a 40-piece standalone swim line titled Dion Lee [Water] alongside his Resort 2016 collection, including multi-tasking styles such as a long-sleeved shirt swimsuit and one-piece with t-shirt sleeves. “I was personally attracted to seeing swimwear in a more urban context. Many women are drawn to one pieces at the moment and the ability to style swim as more of a bodysuit.”

Lisa Marie Fernandez, a former stylist who often wears one of her own swimsuits as a bodysuit in the city, also sensed a demand for ‘beach-to-bar’ solutions soon after she launched her line of neoprene swimwear in 2009. In response, she expanded the collection to include neoprene body-con dresses, zip trousers and skirts, adding terry-towelling cover-ups for Resort 2013. Today, she ships to 149 stockists in 32 countries and the gingham shirtdress and skirt from her Resort 2015 collection were both instant, sell-outs. “You could wear it by the sea, but also in the city in the day,” said Fernandez. “I think for this reason, this dress has resonated with the consumer in a way that I never could have imagined.”