PARIS, France — Christian Dior is set to stage a live-streamed runway show Wednesday afternoon in the southern Italian city Lecce despite the fact that no physical audience can attend. It's the brand's latest effort to continue to gain market share during a pandemic that has left the luxury industry reeling.

Dior’s revenues and profitability have surged in recent years amid rising demand for its canvas book totes, saddle bags and high-top sneakers, and the brand is determined to stay in the spotlight, Chief Executive Pietro Beccari told BoF in a recent interview. In addition to splashing out on the destination show, it’s planning pop-up stores across the Riviera and sponsoring a sprawling museum exhibit in Shanghai this month.

But does the strong momentum at the LVMH-owned brand mean it could actually catch up with its oldest rival, fellow couture-and-beauty giant Chanel? A new report shows that Dior is closing the gap — though the brand still has a long way to go. 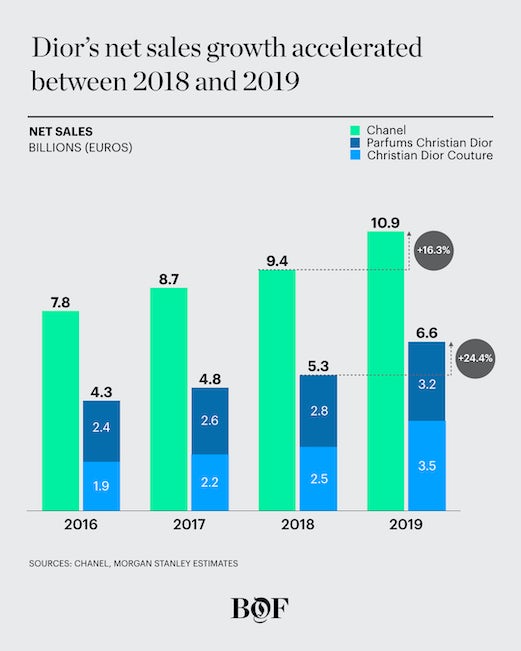 Its profitability has also inched up steadily in recent years — a sign that after decades of high levels of investment, LVMH Chairman and Chief Executive Bernard Arnault is finally cashing in at his second-biggest luxury house, which he famously acquired in 1984 for one symbolic franc. (Louis Vuitton remains the largest label in the stable, with estimated sales of €12.7 billion.)

"The brand has now gained the status of a ‘mega brand’ in luxury, allowing it to benefit from a virtuous circle of outsized investments... and higher than average industry growth,” Morgan Stanley analysts Edouard Aubin and Elena Mariani wrote.  "We see no structural reason for Dior's profit not to get close to that of Chanel today.”

For its part, Chanel’s revenues grew 13 percent on a comparable basis to $12.3 billion in 2019. That's faster than the industry average, but not enough to keep its financial lead on Dior from narrowing for a third consecutive year.

As the coronavirus pandemic pushes the fashion industry into its deepest crisis in a generation, Dior could keep gaining on Chanel because of its greater willingness to sell online. While Dior has ramped up e-commerce in recent years, selling its $4,500 Lady Dior purses and $860 t-shirts through its website and even on social platforms like China's WeChat, Chanel is still holding out from selling its handbags or fashion online, even as the company said it expects difficulties from the coronavirus to continue into next year.

The rivalry between the two Parisian houses goes back to Dior's founding in the late 1940s, when Gabrielle "Coco" Chanel derided Dior’s fairytale aesthetic, replete with layers of pleated tulle, as regressive.

While Dior's "New Look" may have pushed her brand out of the spotlight back then, Chanel has dominated since the 1980s. The late Karl Lagerfeld reinvigorated the house’s tweed suits and quilted handbags, filling the void for a charismatic creative force while its owners, the secretive Wertheimer family, grew the brand into a global empire.

Dior has also enjoyed a high degree of investment under Arnault, who has long maintained that there’s no reason the house couldn’t eventually catch up with its rival. But while Dior’s top-line and visibility have steadily climbed, frequent designer changes, segmented branding, and a higher reliance on seasonal fashion (versus classic luxuries) have held it back from keeping up with Chanel's trajectory. 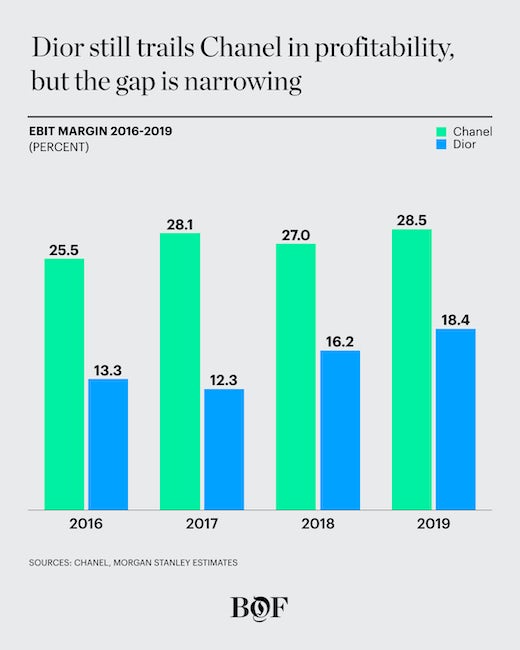 Dior's combined EBIT margin for fashion and beauty climbed from 12.3 percent in 2017 to 18.4 percent in 2019, the report estimates, but remains far below Chanel's 28.5 percent margin.

While both houses spend heavily on developing and communicating about new products, Chanel is able to recoup more of that investment in creativity with top-end prices that surged well above sector norms. The €7,600 price tags on Chanel’s quilted leather handbags exclude many clients, to be sure, but the frequent hikes have reinforced the items' power as status symbols, in addition to giving clients the sense that they’re making a good investment by buying now, rather than later.

“Chanel’s brand positioning is unique in that it can be similar to Rolex for watches. When you’re making a purchase it’s not just about fashion and making yourself stand out, it’s also about preservation of value,” said Elspeth Cheung, global brand valuation director at Kantar's BrandZ unit.

While Dior’s prices have also climbed, its policy has been less aggressive. One reason Dior has less room to maneuver on pricing could be that many of its products are seen more as fashion pieces than as timeless luxuries.

Evidence of that perception can be seen in the resale market, where Chanel pieces command on average 70 percent of their original retail prices, according to Charles Gorra, chief executive of the handbag reseller Rebag. Dior pieces go for 45 percent of what customers originally paid, he said.

While surging resale prices for some Dior pieces like vintage saddle bags reflect the brand's current momentum, the catch-up has been isolated to a few hip items. Dior may be on the up, but it's not seen as an investment brand in the league of Chanel. “Chanel has consistently been seen as a rare and iconic product,” Gorra said.

A key factor that has powered Chanel's success has been the consistency of its message across price points and product categories, throughout the years. The way Chanel markets a $40 lipstick or $400 sunglasses isn’t that different from how it presents a $4,000 velvet clutch, and the brand has also maintained many strict aesthetic codes from the time of Coco Chanel’s founding through today.

Dior, by contrast, tends to house a multiplicity of voices at any given time—with separate creative directors for womenswear, menswear, and jewellery—as well as tentpole perfumes that pursue their own client in their own way. This approach broadens their appeal, but holds the brand back from projecting a unified image.

That Dior should eventually harmonise its message across product categories is an idea that has been bouncing around the LVMH ecosystem for years — the strategy is referred to internally as "One Dior." Dior Couture's Beccari recently confirmed that the fashion and beauty divisions have been working to craft a more coordinated message, particularly online.

But the group knows that a more segmented approach is still what works for them, as they’ve yet to identify a single voice that could speak to the clients of J’adore Dior, Eau Sauvage, and Kim Jones’ sneaker drops at the same time.

The brand has also had to invest in rebooting its image when it changed creative directors, moving on from figures as prominent as John Galliano, Hedi Slimane, and Raf Simons, who imposed their vision for the brand and then left.

Even if Dior lags behind Chanel in terms of revenue, price positioning and the clarity of its brand image, the current creative directors Maria Grazia Chiuri and Kim Jones do have some of the hottest items of the moment. A lineup of easy-to-sell, hero products — for which clients come to the store knowing exactly what to expect — as well as having a robust e-commerce business could help them to keep gaining share during the coronavirus pandemic. Morgan Stanley estimates Dior’s sales will fall by 14 percent this year, compared with a sector that’s expected to drop 20 percent to 35 percent.

For Dior to catch up, however, it would have to keep growing faster (or shrinking more slowly) than Chanel for several years. The brand may be narrowing the gap, but that's still a tall order against such a juggernaut.

Others have tried: Alessandro Michele's reboot of Gucci has pushed sales into mega-brand territory, but the brand's beauty partnership with licensee Coty has yet to make a meaningful financial contribution. Hand-stitched leather goods specialist Hermès has the clout to price its goods higher than Chanel's (and is the only one to beat Chanel's performance in the resale market), but their beauty division also lags behind. For perfume giants like Puig's Paco Rabanne, the fashion business usually remains a niche proposition.

This spring, Chanel was able to raise its handbag prices by 5 percent to 17 percent, depending on the region. The move came one year after its charismatic leader, Karl Lagerfeld, passed away and replaced by a more low-profile successor, Virginie Viard, and even as the world economy tumbled due to the coronavirus pandemic. That kind of prestige is built up in the long haul, and is a luxury granted to very few.

Why Dior's CEO Is Pushing haute couture in a Pandemic

These Luxury Brands Are Raising Prices in a Pandemic