NEW YORK, United States — Elizabeth and James, the contemporary brand launched by Ashley and Mary-Kate Olsen, has entered into a licensing agreement with Kohl’s after shutting down its store and most in-house operations.

In September, the company – which was known for its mid-priced casual wear and accessories – laid off its design team, attributing the decision to poor sales, according to people close to the company. The production team stayed on until the end of the year to help fulfill orders that were already in place and has since been let go as well.

On Wednesday, Kohl’s said future collections will be designed by the mass-market department store’s design team with oversight from the Olsens, and include apparel, handbags, accessories and beauty products. It will be sold only at Kohl’s stores and website.

A spokesperson for Elizabeth and James said "we realigned the business in order to reach a broader customer base." 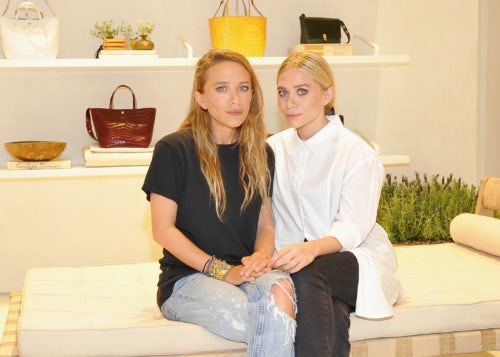 The decline was rapid for the brand, which the Olsens founded in 2007. Analysts estimate the company was generating $50 million in annual sales during its prime, though the spokesperson said the business was "much larger than that." As recently as 2017, the company boasted double-digit sales growth, and was introducing new products at a fast clip, including a watch collection and curated vintage pieces. Their “Nirvana” perfume line was the biggest fragrance launch in terms of sales at Sephora between 2011 and 2016, and a flagship store opened at The Grove shopping mall in Los Angeles in 2016.

That store closed at the end of last year, and Elizabeth and James beauty products are marked down at Sephora stores and on the retailer’s website. Buyers at Barneys, Nordstorm and Revolve confirmed they are no longer working with the brand. Neiman Marcus, which had items for sale online, most marked down by 50 percent or more, declined to comment.

The brand’s troubles began when the Olsens bought it back from licensee Jaya Apparel Group in late 2015. At the time, they cited a desire to “tell the same story” as that of their high-end label, The Row. Known for a minimalist aesthetic that was less overtly feminine than previous Elizabeth and James pieces, some in the industry saw the move as jarring for consumers.

“The brand's image really changed into something else,” said a designer who worked with the Olsens while the label was still held by Jaya. “It was a cheaper version of The Row, but their production team [didn’t know how to work with] the contemporary market.”

According to the designer, the two founders had grown frustrated with the contemporary market and what they saw as its lower standards. Contemporary labels, where trend-driven products usually range between $200-$500, are caught between ascendant fast-fashion brands and declining department store sales. Some once-popular category brands, including Marc by Marc Jacobs, whose bread and butter were wholesale partnerships, have had to shut down as a result. Others, like Tibi and Theory, have refreshed their design and sales approach in an effort to move past the contemporary market’s limitations.

I was surprised at first, but knew that if the Olsens decided to close Elizabeth and James, it was a fully thought-out, well-executed decision.

“The contemporary market customer is younger, it’s not a woman, but rather an 18-year-old girl who wants form-fitting dresses and flirty tops,” said the former Elizabeth and James designer. “When the Olsens took it over from Jaya and tried to cater to the late twenties, early thirty-something woman that can’t afford The Row but wants to buy into something similar to that brand, it didn’t work because the quality just wasn’t on par.”

Another designer previously employed at The Row said that brand’s products were at the high end in terms of materials and finesse, even compared with other luxury labels she’s worked with.

As an example, she cited double-faced cashmere, a material used by The Row that cost up to $300 per yard (compared to an industry average of $80–$100 per yard). Switching over to crepe and cotton polyester for Elizabeth and James designs was a big step down, she said.

When they brought the label in-house, the original employees stayed at Jaya to work on a new brand that would become Cinq a Sept, while a new team of designers and producers with more high-end experience took over for Elizabeth and James.

Still, the Olsens’ style clout and success with The Row, which had already garnered them three CFDA awards by that time, was enough to convince one investor. Tom Kartsotis, the founder of Bedrock Manufacturing Co., whose portfolio includes Shinola, Steven Alan and Filson, made a minority investment in the brand at the start of 2016. But it was short-lived: a representative for the company confirmed that they no longer have a stake in Elizabeth and James.

The Row has become a powerhouse in the fashion industry and, in order to perfect your product, it needs your undivided attention.

“I was flooded with messages from the brand’s supporters wondering what was going on,” said Alyce Peeler, the woman behind the Olsen twin fan account Olsen Oracle. She initially hoped the brand’s silence online heralded a coming rebrand. Eventually, she called their Los Angeles store, only to find that the number was out of service.

“I was surprised at first, but knew that if the Olsens decided to close Elizabeth and James, it was a fully thought-out, well-executed decision,” she said. Peeler added that she had recently purchased a pair of discounted sunglasses from the brand and is stockpiling their Nirvana perfumes before they sell out for good. “The more I thought about it, though, the more the timing made sense – The Row has become a powerhouse in the fashion industry and, in order to perfect your product, it needs your undivided attention.”

At Kohl’s, Elizabeth and James joins brands such as LC by Lauren Conrad and Simply Vera Vera Wang, both of which generally sell items retailing for less than $100.

Related Articles:
Who Will Dress the Philophiles?
At the Row, a Surgical Precision
America Needs to Rethink Its Role in Fashion