Inside, artichoke green plants and neon signs cut through the abundance of sleek marble countertops and concrete floors that form the backdrop to numerous silver railings and stone walls displaying exclusive sneakers, street-luxe apparel and homeware.

Like many of its streetwear peers, the store often sees long queues of young fashion devotees, fully dressed in the latest Off-White, Balenciaga and Nike gear, waiting for the newest, limited sneaker launch to drop. Lines often stretch far beyond the corner of the monolithic 9,500 square-foot building. 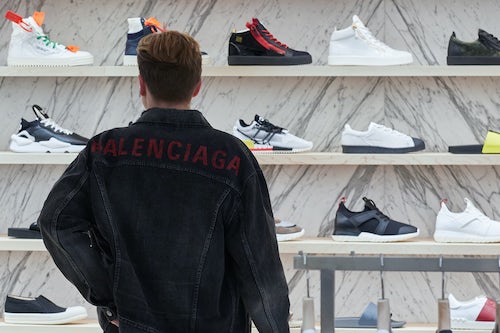 While the fashion industry has only recently embraced drops, for End, this has been a weekly occurrence since its inception in 2005. On “drop days,” lines can reach up to 500 shoppers. “We’ve had queues outside of our stores for as long as I can remember,” says Parker, who, along with Ashworth, at the age of 22 founded the menswear destination in Newcastle with £20,000 (about $26,000) of their own money.

The store quickly became known for its unique, curated mix of sportswear brands such as Nike and Adidas and fashion-forward, emerging labels like Henrik Vibskov and Umbro by Kim Jones.

In 2006, End launched its e-commerce website and online sales quickly eclipsed those of its brick-and-mortar shop.

Still, many high-end brands weren't convinced. “Back then, consumers weren’t mixing luxury with emerging fashion, so it was very hard to attract the brands that we were interested in working with,” explains Parker. “Very quickly we understood that we needed to become the best partners to the brands, representing them in right way, paying the suppliers on time and always act respectful.”

It wasn’t until 2009, when End opened a second Newcastle outpost and started to introduce contemporary fashion brands such as A.P.C., Acne Studios and Comme des Garçons, that the business started cultivating a community of loyal, young shoppers. The move paid off and that year revenues grew by 50 percent.

For Parker, dipping a toe into the luxury market was naturally next on End's agenda. “Mixing [streetwear and luxury] is so accepted now with Virgil Abloh at Louis Vuitton and with LV’s Supreme collaboration, but when we started speaking to luxury brands it wasn’t an easy conversation,” he said.

At the time, upscale houses were predominately working with more established department stores and high-end boutiques, which mixed its merchandise based on price points and design aesthetic. Associating themselves with End would have been a risky move.

“We were the new kids on the block [and] one of the first stores to have the vision of how the younger generation would dress, mixing up the styles and brands,” says Ashworth, who started working with luxury brands in 2010. “I spoke to them about our millennial and gen-z consumers and about how we were reaching a different consumer. Some of the more forward-thinking ones got it and came onboard and I don’t think any of them have regretted it.” 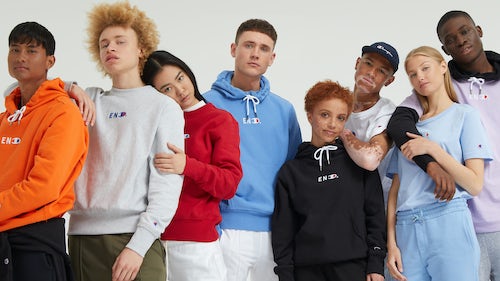 By 2014, End passed one million registered users on its website and luxury brands including Saint Laurent, Maison Margiela and Valentino started to see the opportunities of working with the retailer and signed on. Around that time streetwear had entered the arena of high-fashion with a new wave of emerging brands. Labels like Off-White, Vetements and Gosha Rubchinskiy started blending fashion-forward design and a luxury-like positioning with community-driven authenticity often found in street culture. The global fashion industry was about to be disrupted by streetwear, and End had seen it coming for years.

For Index Ventures, which has also invested in Farfetch, Net-a-Porter and Grailed, it was enough proof to take a minority stake in the retailer, for an undisclosed sum, in 2014.

The backing — End’s first ever investment — enabled the company to expand its Newcastle store, open a new three-storey flagship in Glasgow and bring its tech team in-house (instead of working with a third-party) where they worked on new developments, including the 2015 introduction of End Launches, a first-of-its-kind online raffle system that lets consumers enter draws with the chance to win and purchase exclusive and highly coveted sneakers.

The changes led the company to grow its team to more than 450 staffers and its revenues from $35 million in 2015 to a projected $180 million by the end of 2018. According to Parker, End has been profitable since day one.

And while End’s annual revenues still track behind those of its competitors — MatchesFashion reported about $393 million in revenue for the year ending January 2018, while Ssense is on track to hit about $800 million in sales in 2020 — it has cultivated a strong community on which it is betting strong future business growth.

According to data from SimilarWeb, a digital market intelligence service whose data is imperfect but directionally accurate, monthly web traffic to End’s website reached 7 million in September 2018, compared to 3 million for MatchesFashion, 5 million for Ssense and 3.6 million for Mr Porter. End also had the highest average page views and average article visit duration per session out of the group. It also has a higher Instagram following than that of its competitors.

“End isn’t eclectic just to be eclectic. Its credibility as a first-mover allows for strong relationships with e-commerce eschewing streetwear brands, which provides it with a competitive advantage against other retailers when it comes to product,” explains Robert Burke, founder and chief executive of retail consultancy firm Robert Burke Associates. “[Meanwhile] luxury brands look to End as a platform to elevate their own brand through sharing a stocklist with cult streetwear brands.”

Now with a solid foundation in place, End is ready to become a sizeable player vying for a share of the fast-growing online luxury goods market, which has tripled in size over the last five years, to about $23.5 billion in 2017, according to global consultancy Bain & Company. 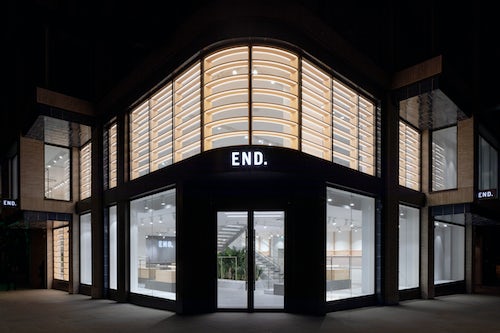 While e-commerce sales make up around 90 percent of End's total sales, the founders see physical stores as key to the company's future growth as it offers additional exposure while providing its target demographic with physical touchpoints to the brand. “Over the next few years we’re looking into opening more stores. Next year we’ll be opening our first international store,” says Ashworth, who declined to disclose the exact location. “Our data shows that the UK, Europe, US, Asia and Australia are all very important markets, so with our physical retail expansion it would be a dream to go all over the world.”

In addition, End plans on increasing its brand collaborations and special projects, which will drive novelty for the consumer and additional marketing for the company. Past product collaborations include those with Champion, Neighborhood, Adidas and Ami.

What’s more, End recently purchased a new UK distribution centre, which the company will move into in early 2019 and will be able to hold five times more stock than its current warehouse. Additional distribution centres in Europe, US and Asia are said to follow.

If all goes to plan, the retailer projects that revenues will double to $350 million by the end of 2020.

“[In the end] it’s about removing friction, so the customer can seamlessly shop across channels, and I don’t think many companies have managed to crack that yet,” says Ashworth. “We’ll make it as convenient and as good of an experience as possible for that consumer. We’ve got some good stuff coming.”

Who Is Winning the Fashion E-Commerce Race?