NEW YORK, United States — Farfetch draws customers with its seemingly endless selection of handbags, clothes and shoes. Now it’s betting original content will entice more of them to come back.

The company launched Farfetch Communities back in March, giving shoppers access to content from the likes of Chloë Sevigny and Adwoa Aboah. The online marketplace’s latest gambit involves exclusive content from fashion houses, starting with Gucci.

“Gucci Open House” goes live on Farfetch Communities today. It’s an eight-month-long series that takes users into the homes and lives of different Gucci diehards. The content has been created by Gucci’s digital marketing team, and gives shoppers a peek at how these superfans integrate Gucci into their everyday.

This isn't Farfetch's first partnership with Gucci. The two companies teamed up in 2017 to offer 90-minute delivery in certain cities.

Communities is designed to address what analysts have described as Farfetch’s biggest weakness: though it offers an ultra-wide product assortment and competitive prices, it lacks a brand identity of its own. Many shoppers don’t care where they buy their luxury goods from online, so long as they get the real thing, and for the right price. And on Farfetch's marketplace, it's the individual sellers, not the company, that often determines which products are for sale. 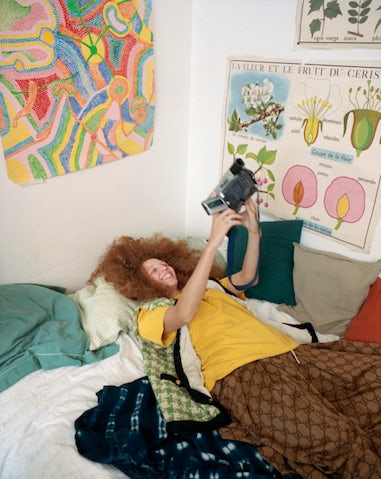 That can make it difficult to build loyalty; though Farfetch’s revenue has ballooned over the last few years, the company is spending more to acquire new customers in order to maintain that pace of growth. Farfetch had 1.7 million active customers in the first quarter, up 64 percent from a year earlier. But losses also widened, and the company’s stock is down 16 percent since reporting quarterly results earlier this month.

José Neves, founder and chief executive of Farfetch, told BoF that giving shoppers access to exclusive content from a popular fashion house like Gucci will solidify their relationship with the marketplace.

“This is about expressing the Farfetch brand and ethos in a unique way,” Neves said. “We have a community of the best curators of fashion. We have boutiques, designers and brands, and we also have fashion consumers from all over the world. Now, we are leveraging the power of our community.”

Farfetch is playing catch-up with some of its competitors. Net-a-Porter has run an online fashion vertical, The Edit, since 2013, and published the first issue of its print magazine, Porter, in 2014 (the two editorial staffs merged in 2018 under Porter). Matches Fashion has its In Residence program, where shoppers can attend panels and meet designers at 5 Carlos Place, its London retail concept, as well as pop-ups in cities like Los Angeles, Paris and New York. Streetwear-focused Ssense employs 032c Founder Joerg Koch as its editor-in-chief and hosts events at its Montreal flagship.

In January, Farfetch appointed Holli Rogers, a veteran of Net-a-Porter, Chanel and Neiman Marcus, to work with its marketing team on Farfetch’s branding and visuals.

Neves said Farfetch has a pipeline of brands and boutiques lined up to offer content on Farfetch Communities after Gucci’s partnership ends. Eventually, Farfetch wants to tailor the experience in a personal way, so that specific customer segments like sneakerheads or streetwear hypebeasts can turn to Communities for exclusive branded content.

Luxury shoppers today also have plenty of access to content from their favourite luxury brands via social media. Gucci, especially, gives shoppers a generous look into its world via Snapchat and Instagram. Neves, though, believes Farfetch can offer more premium content than the average luxury ‘gram.

“If you love fashion, you love Instagram because it connects you to the world, but it is not something you use to get inspired on your fashion journey,” Neves said. “There’s too much noise. Even searching something like #Gucci will get you Gucci cats, dogs, cakes. It’s not a place for curated content, and that’s what Farfetch Communities will be.”

Why Farfetch's Free-Spending Ways Have Some Investors Concerned