NEW YORK, United States — Farfetch reported a smaller-than-expected loss in the third quarter on Thursday, and for the first time put a date on when it might break even: 2021.

Revenue increased 90 percent year-over-year to $255 million in the third quarter, better than analysts’ average expectation of $244 million, according to Yahoo. They also expected a loss of 37 cents per share: Farfetch reported a loss of 28 cents. Gross merchandise value, or the revenue of goods sold through Farfetch, reached $420 million, up 40 percent year-over-year by constant currency.

Shares soared by 20 percent to $8.98 in after-hours trading.

Farfetch founder Jose Neves has set his sights on winning the lion’s share of online luxury shopping dollars, often befuddling analysts looking for more of a focus on profitability. The company, which operates as a marketplace where boutiques and brands post products for sale, has acquired multiple companies since going public in September 2018, and used promotions to gain market share.

Analysts have become increasingly concerned about the short and mid-term health of the business, particularly as losses spiked in recent quarters. The $675 million acquisition of New Guards Group, the brand distribution and production platform behind Off-White and Heron Preston, was of particular concern; Farfetch shares have fallen by more than half since that deal was announced in August. 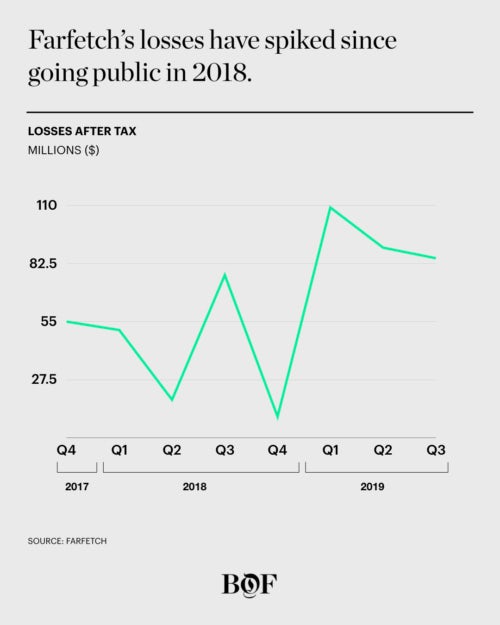 On Thursday, Neves and Chief Financial Officer Elliot Jordan said losses decreased in the quarter because the company pulled back on promotions. (According to Bernstein, the average discount level on Farfetch in the first half of November is 17 percent, which has improved from 20 percent in September. Net-a-Porter had virtually no discounts in that period.)

That pullback didn’t negatively impact sales, they said, because the deals had mainly attracted first-time shoppers. Instead, Farfetch gave discounts and incentives to more frequent and higher-value shoppers. Currently, the average order value is $582, versus $585 in the same period last year.

New Guards Group is also helping Farfetch’s bottom line. The portfolio of brands generated $63 million in revenue in the third quarter, and $27 million in profit. And those brands as a whole sold more products on Farfetch’s marketplace than any other single label. The company expects it to generate $80 million to $90 million in revenue next quarter.

Executives also offered a potential date for the company to reach profitability. In response to a question from an analyst, Jordan said 2021 “seems about right to us at this point in time.”

Some analysts see a long road ahead for Farfetch to become profitable. Luca Solca, an analyst at Bernstein, earlier this week predicted that Farfetch could need to raise cash by the end of the year. On Thursday, Jordan said the company has a $300 million secured loan commitment which remains undrawn.

In a note released ahead of the earnings report, Bernstein downgraded Farfetch to “underperform” and projected its stock would fall another 51 percent to $4.

“Farfetch is no Uber of luxury goods distribution: most of the luxury goods brands worth their salt already have limousines of their own,” namely their own stores and websites, wrote Luca in his note. “The industry needs local fulfilment services. It is not obvious — it needs pure-play multi-brand digital retailers.”

Neves said that in the most recent quarter, the amount of inventory on the marketplace from the top 10 brands more than doubled. He anticipates more luxury will push more products through “e-concessions” on Farfetch — or direct selling on the platform instead of through its network of boutiques — as they leave online wholesale, where promotions are hard to control.

“I think the endgame is highly favourable to Farfetch,” he told analysts. “Brands will have to protect price integrity and they will have to contain promotional integrity. The online wholesale channel doesn’t allow them to do that… And now they have an alternative at scale. We don’t know obviously the transition how long it will take… [but] we stand to be a big winner from all these dynamics.”

A Cloudy Picture at Farfetch