LONDON, United Kingdom — It’s official. Gucci is the hottest fashion brand on the planet. New data analysed by BoF in partnership with search platform Lyst — which tracks 4.5 million data points per hour from over 65 million annual consumers, 4 million products and 12,000 brands — found that in the second quarter, the jewel in Kering’s crown remains front of mind — with the largest share of wallet — for consumers globally.

Gucci rose three places in the ranking between April and June 2017, overtaking Yeezy and Vetements, which ranked in second and third place respectively. There were no less than four Gucci products in the 10 best-selling products globally, with the brand’s GG Bloom slides topping the list overall. Following an impressive 48.3 percent growth rate in Q1, Gucci posted comparable sales results in Q2, rising to €1,48 billion, up 39.3 percent year over year and beating analysts’ expectations by 7 percent. The brand's operating profit — or earnings before interest and taxes — in the first half of 2017 was over €907 million, up 69 percent from about €537 million last year. 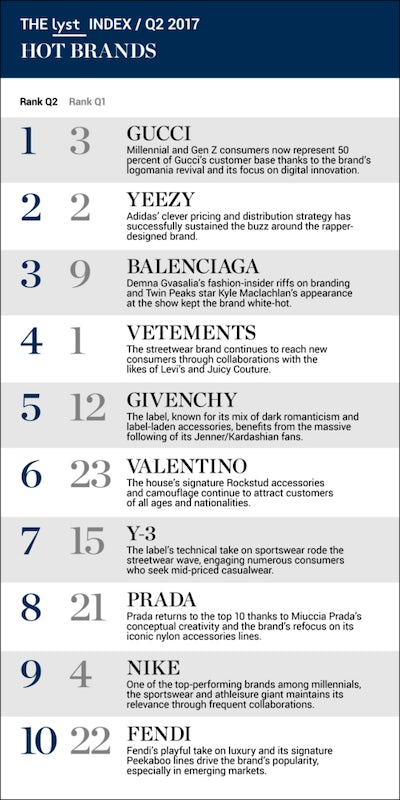 A significant factor in this success was Gucci’s ability to connect with millennial and Gen-Z consumers. Alessandro Michele’s maximalist-magpie aesthetic translates extremely well to digital channels, while the brand’s marketing strategies, such as the meme-led campaign for Gucci watches in March, and Glen Luchford’s recent ‘50s sci-fi inspired video have proved successful experiments.

Sales to millennial and Gen-Z consumers grew at a double-digit rate in the first half of the 2017 fiscal year, and retention is high. "Gucci is selling 50 percent of all sales to these [consumer demographics],” says Kering chief executive François Henri Pinault. “It means that we have a core category of customers that are between 25 and 35.”
Under-35s are projected to account for 45 percent of total luxury spend by 2025. The demographic’s growing spending power has also expanded the product ranges in which they invest. “The attractiveness of couture, of the ready-to-wear is much higher for that clientele than it used to be for older people before," continues Pinault.

Yeezy follows Gucci in the brand ranking, a non-mover at second place, and continues to maintain impressive buzz around its footwear offering. The high profile of the brand’s founder, Kanye West, as a Grammy-winning, multi-platinum rapper, married to one of the most photographed women in the world, is a significant advantage in reaching and engaging consumers. Adidas’ clever pricing and distribution strategy for its Yeezy sub-brand has also contributed to the consistency of the buzz around the brand.

Demna Gvasalia’s streetwear attitude to couture at Balenciaga also found increasing traction with consumers in Q2 — rising from 9th to 3rd place. The brand’s fashion-insider take on product and branding, which included riffs on Bernie Sanders’ presidential campaign typography and turned parent company Kering into a consumer brand for the first time — along with its knack for inviting press-frenzy-friendly brand ambassadors, such as the star of the new Twin Peaks series Kyle MacLachlan — gained traction both in traditional media and online. However, the brand’s inadvertent part in the viral meme, comparing the engorged proportions of its accessories to the largest Ikea shopping bag caused the biggest increase in search in the quarter. 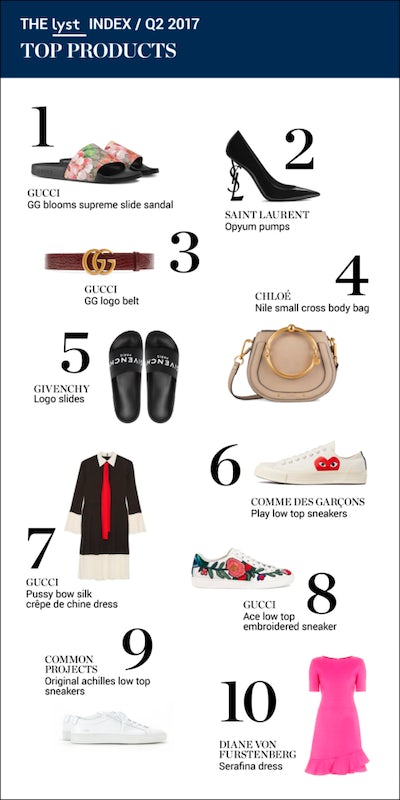 There are some notable new entrants to 10 top-selling products this quarter: the small version of Chloé’s ‘Nile’ bag — which sold out almost immediately thanks to its popularity with street style stars — was the second-highest new entry and the only handbag to make the list. Former Chloé creative director Clare Waight-Keller, who has been appointed as Tisci’s successor at Givenchy, has a knack for leather goods, something that Givenchy is looking to accelerate under her watch.

A now-discontinued Diane Von Furstenberg ‘Serafina’ dress, which launched before Jonathan Saunders took over as artistic director, was one of only two ready-to-wear items to feature in the ranking. The second was a Gucci pussy-bow silk crepe de chine dress, which has wider recognition with consumers thanks to Melania Trump, Amal Clooney and Nicole Kidman, all of whom have been seen wearing a version of it in the past year.

Six of the top 10 selling items are footwear however, making it the dominant category for global product rankings. Saint Laurent’s Opyum pumps, which appeared in Anthony Vaccarello’s debut for the label in September last year, rose two places to take second place in the ranking. The shoes use Adolphe ‘Cassandre’ Mouron’s iconic logo for the heel, and became one of the lasting images of the Spring/Summer 2017 season, featuring heavily in the press and in the brand’s Autumn 2017 campaign starring Freja Beha Erichsen, helping to drive their popularity.

Slides were the footwear category winners in Q2, however, with versions from Gucci and Givenchy outselling sneakers from Common Projects and Comme Des Garçons. Luxury brands continue to capitalise on the slide trend that has merged with the logo-mania craze and made waves as an entry-level product in the luxury market. The Givenchy slides were also worn by Kylie Jenner, along with Robb and Kourtney Kardashian, her half siblings, which may explain Givenchy’s presence on the list, despite Tisci’s exit from the brand.

In fact, news coverage of fashion brands appears to have little impact on consumer behaviour — be it the designer exits and appointments at Givenchy, Versace, Chloé and Lanvin, or collaborations from the likes of Vetements and Louis Vuitton. No products created through collaboration are among the top 10 bestselling products, despite extensive media coverage of Vetements’ Spring/Summer 2017 collection, which featured collaborations with 17 brands and numerous others such as Gosha Rubchinskiy’s collaborations with Kappa and Burberry and Rihanna’s Fenty x Puma range.

The wave of fashion collaborations in recent cycles reflects a growing awareness that it is established rather than new luxury consumers that will drive future demand. Through collaborations, brands can provide existing consumers with the ‘newness’ that reignites engagement with established and familiar product ranges. Brands can also better cater to millennial and Gen-Z consumer preferences by co-opting creative aesthetics that suit a younger generation’s tastes, a strategy best exemplified by Rubchinskiy's Burberry capsule.

But despite the fashion industry’s fondness for complex and costly collaborations, the data indicates that influencer marketing and celebrity placement has a much bigger impact for considerably less effort. 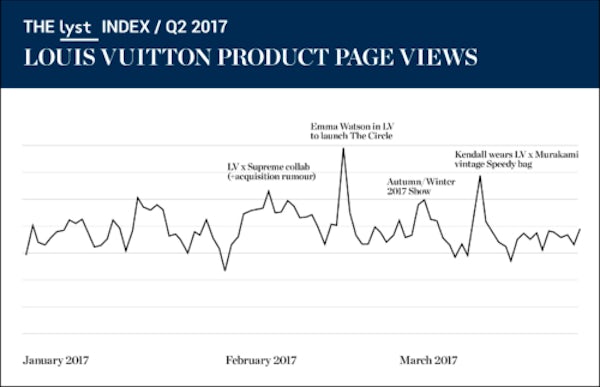 When Louis Vuitton announced the locations of six pop-up shops that would carry its collaboration with Supreme, for instance, the brand saw an 81 percent week-on-week spike in search traffic, and over 10,000 people across Tokyo, London and Sydney lined up for a chance to buy pieces from the collection. However, the combined search traffic that resulted from Louis Vuitton menswear artistic director Kim Jones’ Instagram teaser, the official announcement and the runway show in which the collection debuted, was eclipsed by a single Instagram post from Kendall Jenner featuring the model wearing a vintage Louis Vuitton x Takashi Murakami Speedy bag, which is no longer available for sale.

Similarly, Emma Watson’s decision to wear a dress from Louis Vuitton’s Autumn/Winter 2017 collection when promoting ‘The Circle’ caused a traffic spike double that of Louis Vuitton’s womenswear show in March.

Certainly, despite the consumer frenzy and search spikes created by collaborations, the reach and engagement of social media influencers dwarfs their impact — even a partnership between streetwear’s leading brand and luxury’s biggest.

BoF partnered with Lyst, the global fashion search platform, to analyse the behaviour of over 70 million annual consumers, shopping across the world’s largest inventory of luxury and contemporary fashion. The rankings were formulated using Google and Lyst search data, engagement statistics, conversion rates and sales. Due to exclusive vertical distribution models, the Lyst Index does not include: Chanel, Christian Dior, Hermès, Louis Vuitton, Céline and Prada. Look out for the second iteration of the Lyst Index at the end of Q3.