PARIS, France — A handful of antique leather Louis Vuitton trunks protrude from the wall ten metres above the dining tables at Le Frank, the restaurant at the soon-to-open Fondation Louis Vuitton, the brand’s museum-like centre for art, situated in the Bois de Boulogne, a park on the western edge of Paris. Covered in the classic brown and gold monogram that is now synonymous with Louis Vuitton, they seem strikingly incongruous — not simply because of their curious position, but because they seem so aesthetically alien to the landmark Frank Gehry-designed building in which they are housed.

Trademark signifiers like these link the newly inaugurated Foundation with the Louis Vuitton brand, but the architecture — all lightness, transparency, freedom and modernity — is far removed from the weighty notions of history and heritage with which many luxury goods houses have taken pains to align themselves during the tricky years of the global economic crisis.

Writing of the centre, Bernard Arnault chairman and chief executive of luxury goods conglomerate LVMH, which owns Louis Vuitton, quoted Pablo Picasso: “[It] wipes the soul clean of the dust of everyday life. A cleansed soul restores enthusiasm, and enthusiasm is what we — and future generations — need most.” Picasso was speaking of art’s impact on the individual, but flowing from the pen of Arnault, the sentiment might as well have described the reinvigorating effect of the Foundation on the brand whose name it bears.

LVMH has made no secret of the need for a breath of fresh air at Louis Vuitton, the group’s cash cow, which, in recent years, has faced slowing sales growth and diminished cachet. In its most significant move to re-energise and re-elevate the brand, Louis Vuitton appointed Nicholas Ghesquière artistic director of women’s collections in November of last year. In December, the brand appointed LVMH veteran Michael Burke as chief executive, who subsequently brought in Delphine Arnault, daughter of Bernard Arnault and formerly deputy general manager of Dior, to oversee product.

The decision to brand the futuristic Gehry-designed Foundation with the Louis Vuitton name (and not that of its corporate owner LVMH) will certainly help to signal change at the brand. And, if the Louis Vuitton-branded Foundation becomes a must-see stop on the itinerary of the millions of travelers who visit Paris each year (as the company must surely hope), it will become a powerful brand beacon, cementing Louis Vuitton’s links to contemporary art and French culture. 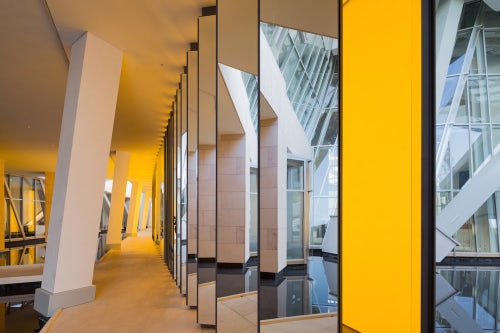 'Inside the Horizon' by Olafur Eliasson at the Louis Vuitton Foundation © Iwan Baan | Source: LVMH

LVMH, however, is keen to maintain a clear distinction between the aims of the Foundation and the business concerns of its largest brand, saying the centre bears the Louis Vuitton name purely because it is the most “emblematic” of all the brands in the LVMH stable. “Vuitton is a very creative brand — but in this case there is nothing related with the economic development of Louis Vuitton,” said Jean-Paul Claverie, an advisor to the LVMH chairman who has, for twenty years, been a driving force behind the creation of the Foundation and the construction of its home. “It’s more close to a museum, a place only dedicated to the arts,” he continued. “But it’s obvious it bears the name of Louis Vuitton and the shining of this foundation and the success of this foundation all over the world will be good for Louis Vuitton,” he allowed.

If Gehry’s building symbolises a “cleansing” of the brand, Ghesquière made no attempts to distance himself from this message when the centre played host, on October 1st, to Louis Vuitton’s Spring/Summer 2015 show, which commenced with a video that announced: “A beginning is a very delicate time / Day zero in the heart of the project codenamed Gehry zero one four / The audience is asked to sit in a place that doesn’t exist for now / A ship surrounded by a gigantic woodland.” (Contrary to some press reports, however, the Foundation will not become the site of all future Louis Vuitton runway shows).

The same month, Louis Vuitton store windows across the world were dressed with Frank Gehry-designed displays; the architect’s sculptural forms, dubbed “Wind Wings,” shared vitrine space with Ghesquière’s debut collection, a strong statement of new beginnings if ever there was one, in which the new artistic direction of the brand and the futuristic Foundation seem to be performing in tandem.

The structure itself is designed to be flexible. Gehry describes it as “a work in progress… it’s not precious, they can mess with it, it’s a forgiving building. It’s whatever you want it to be.” The spaces can accommodate visual and performance art, music, and poetry recitals. Those lining up to “mess with it” include Daniel Buren, who memorably created the set for Marc Jacobs’ Spring/Summer 2013 show for Louis Vuitton and who, like Gehry, has previously been a presence in the brand’s store windows. Buren aside, however, the Foundation’s programme currently makes no explicit reference to the strong connection that Louis Vuitton has built with the contemporary art world through a series of major product collaborations overseen by the brand’s former creative director Marc Jacobs. Interestingly, there is no Yayoi Kusama on display, no Richard Prince, no Takashi Murakami or any of the other prominent artists that have collaborated with the brand in recent years.

Under the watch of museum director Suzanne Pagé, formerly in the top post at the Musée d'Art Moderne de la Ville de Paris, the programme is modish, including heavyweights like Gerhard Richter alongside trailblazing mid-career artists such as Pierre Huyghe, Liam Gillick and Pierre Huyghe (the latter’s extraordinary video work from his exhibition at Hauser & Wirth in London, Human Mask, being among recent acquisitions), as well as rising stars such as Ed Atkins and Adrián Villar Rojas. The foundation is committed to supporting fresh talent through schemes such as a residency for very young artists, but will also delve into the twentieth century for exhibitions on Modernism.

“It is in phase with the values of LVMH,” says Claverie.“We represent the artists of today and create legitimacy between the creators of today and those of the twentieth century. We can drive the public’s eye. We can take them from art that is familiar to work they don’t know so well. We push up from our history to create our future.”

Quizzed on the strong Western European flavour of the opening programme, Claverie was swift to respond: “Wait a little bit and you will see that… Asia has its own part in the collection and the programme.”

For his part, Bernard Arnault’s ardour for Gehry’s building will do no harm to his reputation as a man who will back creativity with passion. When the design was first presented it was quite literally impossible to build and the plan was initially rejected by the company. But Arnault pushed ahead. “I’m not satisfied with this ‘No,’ I want to say ‘Yes,’” Claverie recalls the chairman saying. “We didn’t have the techniques available to respect Frank’s artistic gesture and Mr Arnault said ‘Okay, we’ll create the technique.’ We had 200 engineers over two years creating the technology.”

Indeed, the bond of respect — even affection — between Arnault and Gehry is one of the driving forces behind this almost impossible building that billows weightlessly like a ship in full sail on the crest of a rejuvenating wave.