PARIS, France — On Sunday, with the magical late afternoon light on their side, Rodarte’s Kate and Laura Mulleavy stood in the centre of a Parisian courtyard receiving well wishers. Models wearing Rodarte’s Spring 2018 collection, their hair strewn with bows and baby’s breath, gathered on the lawn bathed in 5pm sun. Guests revelled in the Instagram opportunity.

“It was a real celebration of all the people that we work with, but also a celebration of what we do as a brand,” Laura Mulleavy said the day after the show, which represented more than one first for the Los Angeles-based label: its first time staging a runway presentation in Paris, but also its first time being invited by the Fédération de la haute couture et de la Mode to join the official couture week calendar. “The environment was so magical for us, and the city’s sensibility really matches ours.”

To be sure, Rodarte’s romantic clothes fared well in such a romantic setting, and showing in Paris was certainly a pivotal moment in the trajectory of the brand, which had been in a holding pattern in New York for some time. But there are other factors that gave the collection a boost, factors that have compelled several brands to show their ready-to-wear offering during Paris couture week — and the Fédération de la Haute Couture et de la Mode to welcome them as guests.

While the Paris couture seasons — which take place in January and July — have become increasingly busy in the past few years with off-schedule resort presentations (Miu Miu was the trailblazer), the Fédération has now established an entire day dedicated to ready-to-wear labels. In January 2018, that day will move from Sunday to Thursday. 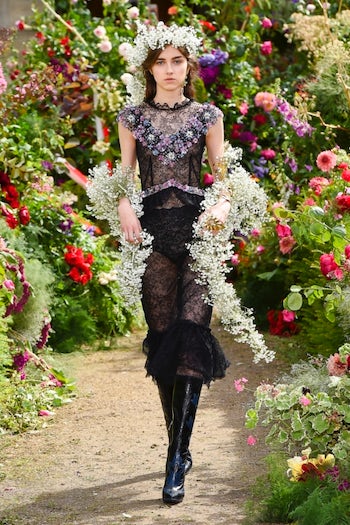 The addition of the ready-to-wear day reflects the shift in business models, as houses respond to a mix of factors ranging from the rise of social media and e-commerce to the decline of department stores.

Some designers are now showing two collections per year instead of four, and it makes more sense to show those collections during January and July when buyers have the largest budgets. Clothes bought during this period also sit on the sales floor at full price for a longer period of time. For many of the ready-to-wear designers showing this week that rely on increasingly unreliable wholesale partners, this is crucial, and could prove to be a make or break moment in their businesses.

At the beginning of 2016, Vetements adopted this approach, although it abandoned fashion shows altogether this season. Other designers — like Tommy Hilfiger — remain committed to showing in-season, with apparel available to purchase immediately. Another contingent continues to operate under the traditional model: two main collections, two pre-collections, and for some, two haute couture collections.

“There is a trend toward invidualisation,” said Pascal Morand, executive president of the Fédération de la Haute Couture et de la Mode. “The challenge of fashion week is to feel globally cohesive, but with more choices.”

It seems that, for now, cohesion may come from increasing the visibility of — and activity around — the haute couture shows, resulting in four major fashion moments each year, with brands dipping in and out of both cities and time slots as they wish.

In order to show on this season's official calendar, designers were required to fill out a formal application, which included paperwork and in-person meetings. For the established designers who applied, it could be likened to an A-list Hollywood actor having to do a screen test for a coveted film role.

While Mulleavy acknowledged that the process was “daunting,” she also recognised its necessity. “I wanted to be really respectful of tradition,” she said. Out of the 17 guest members there were five new names on this season’s schedule: A.F. Vandevorst, Azzaro, Proenza Schouler, Rodarte and Ronald van der Kemp.

For “demi couture” brands like Ronald van der Kemp, showing at couture — where his latest collection was enthusiastically received by the press — is a natural fit. But for ready-to-wear brands like Rodarte and Proenza Schouler, it’s a move grounded in both creative and commercial motivations. By showing Spring 2018 on the couture schedule, two months ahead of their peers, they are the first collections of the season that buyers will bet on.

By presenting in Paris, they are also exposed to an entire new set of international buyers who don’t attend New York Fashion Week, and press who are less stressed by back-to-back appointments. “The turnout was wonderful,” said Peter Dundas, who showed the first capsule collection from his newly launched brand on Sunday night in a friend’s grand rococo-style apartment, where fewer than 100 guests sat on a variety of baroque seating amongst patina-ed silver tea sets, crystal chandeliers and antique clocks. “It felt like people didn’t rush.” 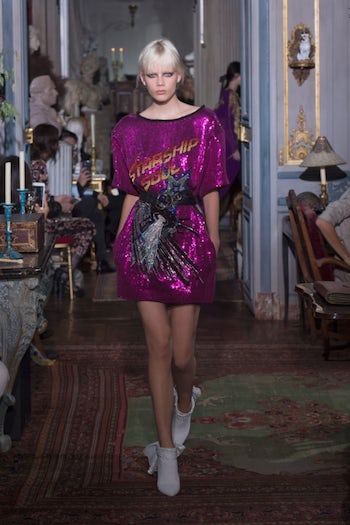 Rabih Kayrouz, who began showing his ready-to-wear collections during couture in January 2017, says that he decided to make the shift after noticing his pre-collections had a much higher sell-through rate than his main collections. “Last July, I sold what I called the pre-collection and I delivered in December and we were at a 90 percent sell through at all the retailers,” he said in his Paris atelier the morning before his presentation, where the French singer Christophe would perform. “Then, I showed in October, and I realised that the pre-collection was stronger. So I said, ‘Why lose time?’ I want to take my time. For me, time is important and quality is important.”

While it’s too early to fully measure Sunday’s impact, Mulleavy said that the label received an “overwhelming response” from retailers. “I think that they’re responding to the emotion behind the collection,” she said, explaining that moving from a modernist art gallery space in New York to the fecund cloister of Port Royal amplified the romantic nature of the clothes instead of sharply contrasting them. “The environment in which you show affects the viewership.”

Los Angeles-based Monique Lhuillier, best known for formal attire and bridal gowns, showed her Spring 2018 collection off-calendar on Monday on the Place Vendôme, with the goal of not only showcasing her brand on a bigger, more international stage, but displaying its breadth (daywear and accessories are an increasingly large part of the business). What’s more, “With my stores wanting the product earlier, showing Spring in September feels so late,” she said. “There are no more rules in fashion. You have to do what’s right for your brand. It was a big undertaking, but I also found it invigorating.”

Dundas says he decided to drop in on Couture Week out of practicality — right place, right time. “It happened to be in Paris, but Paris didn’t figure into the decision,” said the designer, who has shown collections in Milan for Pucci and Roberto Cavalli for the past 10 years. “Not consciously, anyway.”

But for many, Paris itself was a major factor. While the city has always maintained a certain elevated status as fashion’s true north, the relative cooling of the three other major fashion capitals — New York, Milan and London — has made Paris feel even hotter than usual over the past few seasons.

Paris is known for holding creativity in the highest regard and, in an interview with BoF in late June, Proenza Schouler’s Jack McCollough and Lazaro Hernandez emphasised the significance of being able to access the city’s ateliers while building their latest collection. “Going to Paris and being accepted by the Chambre Syndicale motivated us to research all these small ateliers over in Paris; great handweavers and people who specialise in feathers or ribbons,” McCollough said. “There are incredible artisans there, so it's been really inspiring on that level.” (The show invite, in a nod to their new suppliers, was tipped in feathers.)

After all, events such as Haute Couture Fashion Week bring industry to a city where tourism has suffered in the wake of multiple terrorist attacks. In 2016, the number of tourists dipped by over a million from the year before. (In May 2017, the Paris city council approved the construction of a $20 million bulletproof glass wall around the Eiffel Tower.) But the election of centrist president Emmanuel Macron in May has brought a new sense of optimism and stability to the country, indicating it may once again be a place of growth and opportunity for the luxury brands it houses.