LONDON, United Kingdom — In 2003, the Frieze art fair launched as a modest event in a large tent in London’s Regent’s Park. But twelve years on, the fair and its sibling event, Frieze Masters, attracts 70,000 visitors from around the world and has become the centrepiece of a week-long, city-wide programme of art events. Any cultural organisation that aspires to international status will hold a launch of some kind this week, from the unveiling of Richard Tuttle’s monumental installation at Tate Modern to fly-by-night events in derelict office blocks. As gallerists, collectors, curators, critics, artists and curious civilians converge on London for private views, talks and parties, it can be easy to forget that the increasingly buzzy atmosphere surrounds a marketplace. Frieze exists for the buying and selling of art — and, as it grows, the acquisitive urge of those it attracts has been flowing out of the fair and into the city’s fashion retailers.

“Our customers always love our events during Frieze. It’s our busiest time of the year,” says Adrian Joffe, chief executive of Dover Street Market, whose original store is positioned on Dover Street, in London’s Mayfair, a stone’s throw from a number of blue-chip art galleries. Unlike London Fashion Week, which brings with it an entourage of press and store buyers, Frieze attracts an aesthetically sophisticated, wealthy clientele that makes for an excellent fit with the store, which is run by a subsidiary of Comme des Garçons. “Our customers during Frieze are like the ones that come to us all the time — fashion-forward, independent, creative, curious, cool, strong, interested in art and design, daring, lovely and wonderful — there are just more of them about during Frieze,” added Joffe.

Dover Street Market actively tempts Frieze-goers with a richer-than-usual programme of exhibits and events, which this year includes installations by French artist Nicolas Buffe and designer Ann Demeulemeester, as well as the unveiling of Louis Vuitton’s Icons and Iconoclasts collection, featuring a collaboration with the artist Cindy Sherman. 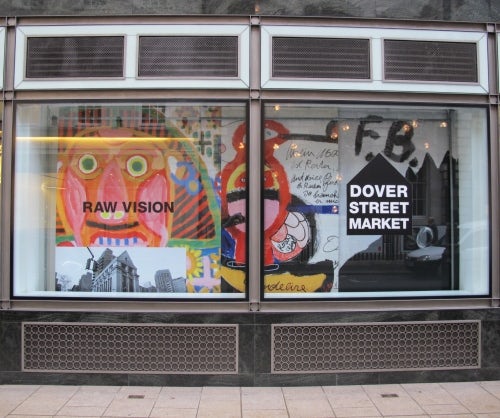 The Frieze private view on the Tuesday night of the fair often more closely resembles a long snaking catwalk — or perhaps the red carpet of a film premiere — than an art gallery, peppered as it is with the gorgeous, the extravagant and the brilliantly peculiar. Under the flooding white lights of the big tent in Regent’s Park everyone is on display. But it’s not all about billionaires’ wives wearing 12cm heels and 10cm skirts as they eye up the Oscar Murillos and ponder which will best match their carefully curated scatter cushions. The Frieze effect is also important to fashion brands that court those working in the creative industries.

“Our heads of design Karin Gustafsson and Martin Andersson are always at the fair,” says Atul Pathak, head of communications for COS. “We find that we are fortunate enough see a lot of our collection represented in the outfits of the people in the fair itself. It makes us feel that we are talking to the right audience.” In previous years, COS has supported Frame, a section of Frieze dedicated to young galleries. “We think our customers have a strong interest across the design world and in contemporary art — it feels like it’s integral to the brand.”

For the last few years, the family-run, Italian luxury goods company Etro has launched artist collaboration projects to coincide with Frieze week. This year, they are unveiling an accessory collection created with the Japanese artist Mika Ninagawa, accompanied by celebratory events aimed at those in town for the fair. “We are keen collectors of contemporary and ancient art,” explains creative director Jacopo Etro, adding that, as a house known for its prints and patterns, his family’s interest in art provides it with an important source of inspiration. For Etro, Frieze carries “a particular atmosphere, a moment of sharing and joyfulness, spreading energy and positivity all around the city…. You can feel excitement in the air.” Whilst the house’s artist collaborations are meant to represent a celebration of creativity, Etro is happy to say “that these kinds of projects have a good impact on sales as well.”

The relationship is, of course, a reciprocal one, benefiting not just retailers, but also the participating artists. “The art scene in Britain has changed a lot in recent years,” notes Linda Hewson, creative director of Selfridges. “The fact is that the arts need public and commercial support now more than ever to ultimately reach as wide an audience as possible.” This year, Selfridges’ Old Hotel will act as an off-site project space for Frieze and the Institute of Contemporary Arts, with live events staged by performers including Korakrit Arunanondchai and Boychild. “We go to Frieze every year and have done since its launch,” says Hewson. “It's part of our cultural research into the global art scene, market and trends. The fair is an important moment on the cultural calendar in London because it creates a buzz of peripheral art happenings and openings.”

Selfridges first hosted an ICA off-site project last year and it drew thousands of new visitors – a much larger audience than would generally visit the cerebral, iconoclastic ICA’s comparatively diminutive galleries on the Mall. Positioning itself somewhere between the glitz of Frieze and the grit of the ICA suits Selfridges well, explains Hewson: “If you consider Frieze as aspirational in terms of the cultural elite who attend and spend, then there is an overlap with our international clientele. If you consider the ICA as being on the knife's edge of contemporary creativity then perhaps the more pertinent overlap is with our savvy London clientele who relate to such art forms more. But good, even great, exciting art draws audiences from all walks of life.” 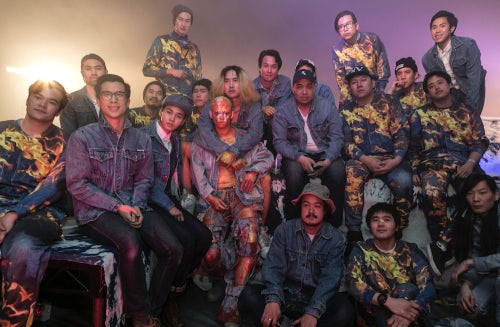 Such off-site projects, performances and events are of increasing importance because the consumer who attends Frieze is, as Hewson notes, looking for something that is one-of-a-kind, unique, experiential. Alexander McQueen, which first became an official sponsor of the fair in 2013, is, this year, putting its name behind Live, Frieze’s inaugural performance art programme. And, for the first time, this year, Gucci is one of the sponsors of the Frieze Masters fair, which is held on a separate site and focuses on historical art.

For both brands, the choice of association is telling. Gucci has allied itself with the talks programme of Frieze Masters, which features names that may be familiar to the brand’s customer base, including South African artist William Kentridge and best-selling author and ceramicist Edmund de Waal. Meanwhile, Alexander McQueen is stepping up to support challenging live art, including an explicit critique of lifestyle branding by the New York-based collective Shanzhai Biennial, which tallies well with the house’s history of spectacular and often provocative shows. “Performance art has had its highs and lows in terms of acceptance and popularity, but it’s certainly the most experimental art practice and there’s a new and rejuvenated energy,” notes Jonathan Akeroyd, chief executive of Alexander McQueen. “As a brand, Alexander McQueen has always been at the forefront of pushing boundaries.”

In describing the fair, Akeroyd makes an important distinction between the convivial, welcoming atmosphere of Frieze and the comparatively quiet formality that many associate with galleries and museums. Part of his intention in supporting Frieze is to help broaden the audience for contemporary art, as well as profit from the crossover potential with the fashion industry. In addition to showing works from the Sadie Coles gallery in a glass vitrine in their Savile Row store, Alexander McQueen will host events that bring together key players from the art and fashion industries.

“Lee McQueen was a big collector and Frieze was always a highlight of his year; he would also ensure that he was always one of the first to visit the fair on the opening day,” explains Akeroyd. “Obviously being a creative company pretty much all of our staff have a high level of interest in the art world and it is great that we all now feel more connected to the fair through our involvement.”