Colour registration is “one of the most elusive elements of a brand" | By BoF Team
Luxury
Share
Comment
BoF Professional Exclusive
By Sarah Shannon February 6, 2020 05:50

LONDON, United Kingdom – When LVMH agreed the $16 billion deal to purchase Tiffany & Co., the luxury conglomerate was also buying a shade of blue.

Pantone 1837 — or robin’s egg blue — is, in the minds of consumers globally, Tiffany Blue, so powerfully does it communicate the storied American jeweller’s visual identity and heritage.

First chosen by Founder Charles Lewis Tiffany for the jeweller’s Blue Book catalogue in the 19th century, robin’s egg blue is thought to have been inspired by the turquoise gemstones favoured by Victorian brides of the day. Now, the colour permeates Tiffany’s advertising, marketing campaigns, packaging and products, Chief Artistic Officer Reed Krakoff explained to BoF. “Tiffany’s heritage is richly reflected in the Tiffany Blue that wraps everything we design. The colour is so distinctive,” he said.

Tiffany isn’t alone in claiming ownership of a single colour. The red soles on Christian Louboutin’s high heels and Hermès’ warm citrus orange boxes are both trademarked. Outside of the luxury market, US beauty company Glossier is working on its own version of millennial pink.

Colour registration is “one of the most elusive elements of a brand[’s identity] that can be ‘owned,’” said marketing consultancy Interbrand’s Global Chief Learning and Culture Officer Rebecca Robins. So how does a brand own a tone, and should smaller labels try?

A Single Colour Can Be Powerful

Tiffany’s harmonised use of a specific shade of blue for well over a century has been instrumental in cementing the colour in consumers’ minds. Robin’s egg blue is intrinsically connected to Tiffany’s brand value (placed at $5.3 billion by Interbrand) because it creates an instant association with the jeweller’s DNA. 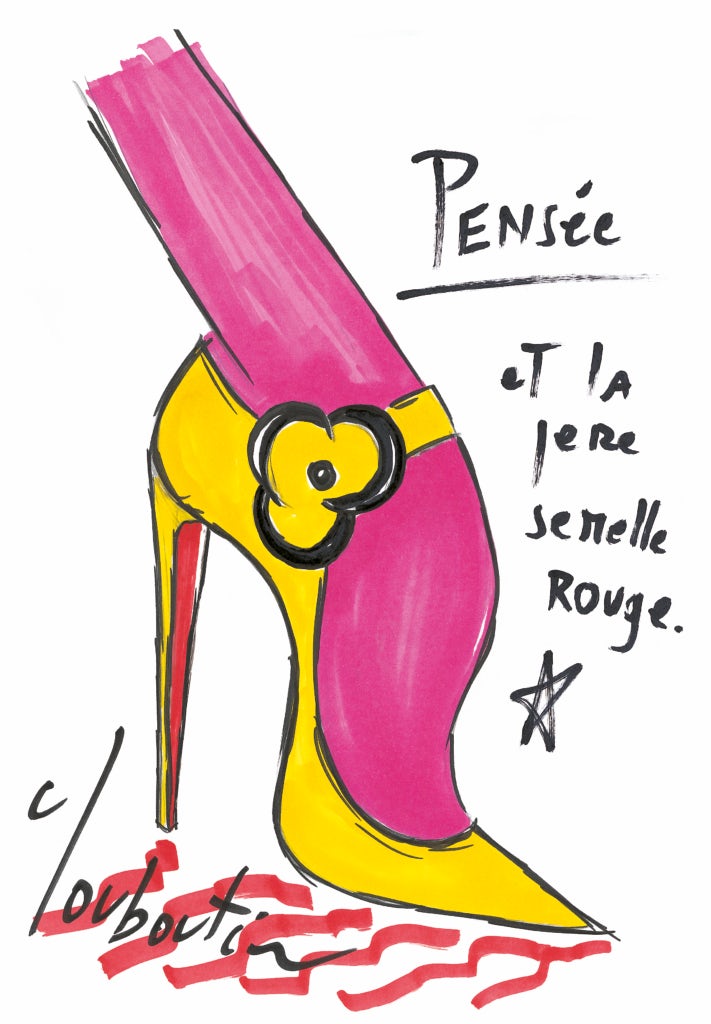 French luxury brand Hermès also has a long association with a single colour. The house originally presented its goods in cream-white paper with a gold edging, but due to rationing as a result of the Second World War, it had to switch to orange for its paper and packaging. The warm citrus tone was subsequently adopted across the brand and was made official in the 1960s. Orange has been synonymous with the house ever since.

It is “a simple and powerful story of creativity within constraint,” said Interbrand’s Robins, who ranks Hermès the 28th most valuable brand globally, at $17.9 billion. “The Hermès orange is all the more distinctive in an industry where brands are dominated by black.”

Christian Louboutin’s connection to his famous red-soled shoe began with an alteration on the Pensée heel prototype in 1992 because the factory’s version looked heavier than his own sketches. By applying his assistants’ red nail varnish to the sole, he transformed the heel and found his perfect line.

“In the beginning of the 90’s in France, there were a lot of women wearing black and also saying ‘I do not like colours.’ So I thought if you do not like colours, you are not going to wear green. But if you don’t like colour I thought you still like red,” the designer said. “You wear black but still can have red lips or nails. That’s why I decided to stick to red. I find the red colour to be noticeable and powerful.”

The Pantone 186C hue has been used by the shoemaker ever since, and the trademark is actively enforced to maintain its value to the brand. Others have attempted to use Louboutin’s signature colour on soles. In 2012, Yves Saint Laurent and Christian Louboutin sparred in court over a series of YSL monochromatic red shoes. After a lengthy legal battle, it was ruled that Louboutin were entitled to protect its red lacquered high heel soles, except when the upper shoe itself was the same colour red. Today, Louboutin’s website lists past legal cases under its “stopfakes” campaign, and a search engine offers customers the chance to confirm legitimate brand stockists.

The Trouble with Distinctiveness

Trademarking names, logos, patterns and shapes are commonplace in the luxury industry, but claiming the rights to a single colour is a rare but highly sought after proposition.

According to Cristina Duch, partner at intellectual property practice Baker & McKenzie, the colour has to be distinctive enough that consumers recognise a brand by shade alone. Where and how the colour is used must also be clearly demarcated. For example, Louboutin’s red sole trademark shows the position mark on the sole of high heel shoes. The brand doesn’t own the trademark for red soles on sneakers, for example.

But distinctiveness typically means a brand will have used a colour long enough to create a broad public perception; this can be challenging for younger labels to achieve. It’s also difficult to trademark colours across entire geographical regions. Tiffany, for example, owns its single colour trademark in Australia, France, Italy, the UK and US, but not, for example, in China, where it is therefore unprotected.

My view is that we will have more colour trademarks in fashion.

“My view is that we will have more colour trademarks in fashion,” Duch said, citing fashion’s rapid need for newness and visual importance, but there are still issues around trademark enforcement: “What happens if the competitors use a red sole but in a different [shade] turning to [a] strong red or black red. Where is the limit?”

Six-year-old beauty company Glossier has applied to trademark its pink packaging in the US; both the pink pouch and shipping box. The colour is used in various tones across the brand’s marketing, products, pop-up stores and merchandise, but not ubiquitously. Its best-selling boy brow pomade is white with a metallic lid.

“We were leaning towards this concept of modern essentials [with Glossier Pink],” explained Head of Design Adriana Deleo, who added that the colour choice was designed to offer a utilitarian, practical language and to balance it with fun. Using pink was also about reclaiming connotations of frivolousness and girliness towards something more approachable and inclusive.

But “owning” the colour pink is a stretch. “There are a lot of other beauty brands using pink. It’s impossible to have complete ownership of the colour, it's not something we're striving for. We’re expanding the Glossier universe and pink is a huge part of how we’re bringing it to life,” Deleo said.

For other brands considering what hue to choose “colour has become tied with age groups and demographics” said Jane Kellock, founder and creative director of trend forecaster Unique Style Platform and member of the British Textile and Colour Group. “Glossier is so good because they tapped into a Gen-Z and Millennial mindset on every level and ‘millennial pink’ is part of that.”

Colour has become tied with age groups and demographics

Still, Kellock warns against using on-trend colours for start-ups because they don’t offer the required longevity. Millennial pink (or Rose Quartz, named as Pantone’s colour of the year in 2016) has since given way to peach, mint green and lilac to become the “it” colours of choice. “So many brands are obsessed with newness so it’s easier to stick with a clean logo with neutrals that allows you to shift directions and adapt to change, like Ganni,” Kellock said.

Connection to a colour also depends on the brand concept and the lifestyle aspirations it wants to project. Kellock said have a stronger understanding of this. “Like Deciem and The Ordinary’s black and white: it’s clean and neutral and builds authority with a clinical look but also looks cool and quite authentic.” For high-end brands that are creating clothes with longevity, Kellock advises  “non-colours” like neutrals, taupe, beige, tinted pastels like dove grey, or black and white. Chanel’s CC logo in black and white, for example, denotes classicism and luxury.

Brands are branching out to experiment with sonic and sensory branding, like smells and sounds, but visuals are still key, according to Interbrand’s Robins. “In an Insta-world where brands are fighting for share of sight, investing in the protection of a colour as a source-identifier for the brand has never seen more potential.”

What LVMH Stands to Gain From Buying Tiffany

How to Unify a Global Brand