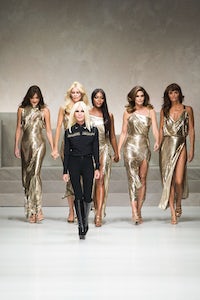 The primarily cash deal — with only €150 million in stock — is expected to close in the fourth quarter of 2019, reduce earnings in the first year, but contributing profits starting in year two.

In a presentation released to investors, Kors — which will be renamed Capri Holdings — outlined its plans for Versace, including increasing its global retail footprint from 200 stores to 300, building out e-commerce and expanding men's and women's accessories and footwear. (It currently makes up 35 percent of the business, the group would like to increase that to 60 percent.)

“This is a very exciting moment for Versace,” she said in a statement, adding that her brother Santo and daughter Allegra's stake in Capri "demonstrates our belief in the long-term success of Versace and commitment to this new global fashion luxury group."

“I am proud that Versace remains very strong in both fashion and modern culture. Versace is not only synonymous with its iconic and unmistakable style, but with being inclusive and embracing of diversity, as well as empowering people to express themselves," she said. "Santo, Allegra and I recognise that this next step will allow Versace to reach its full potential."

The move is calculated to position the accessible luxury juggernaut, which acquired high-end shoemaker Jimmy Choo in July 2017 for $1.2 billion, to take a bigger slice of the high-end luxury market. US rivals PVH Corp. and Tapestry are also trying to build portfolios of luxury brands to better compete with the likes of the European conglomerates that dominate the sector.

In acquiring Versace, Capri is also attempting to offset sliding sales of its Michael Kors brand, which is closing retail outlets and trying to reduce its reliance on department stores. In August, the company said comparable sales would remain flat this year, though profits are expected to rise as it continues to move away from discounting. Capri reported $4.7 billion in revenue in its most recent fiscal year, ending in March, with $222 million coming from Jimmy Choo. Same-store sales rose just 0.2 percent from the previous year.

Versace, for its part, has a world-famous name and cachet in popular culture, but has been struggling to grow a business of similar scale for years, at one point entertaining a public flotation in order to raise funds. In 2009, for instance, the company generated just €270 million ($318 million) in sales, with losses close to €80 million ($94 million).

"At the end of the day, because Versace is well known everywhere, it is a sleeping giant," then-chief executive Gian Giacomo Ferraris told BoF in 2015. "We had balance in terms of gender, [and] as a brand, very strong international recognition, strong DNA and a fantastic archive. If in some way [we could] awaken this giant — my God, you have a power."

Under chief executive Akeroyd — who spent 12 years at Kering running Alexander McQueen before joining Versace in 2016 — family-owned company Givi Holding, which controls the 80 percent of Gianni Versace SpA not owned by Blackstone, posted a profit of €15 million ($18 million) last year after a net loss of €7.4 million ($8.7 million) a year earlier. Revenue was flat over that period at just under $800 million. Versace closed 42 stores in 2017 and plans to roll out a new retail concept early next year.

"Since I joined Versace over two years ago, our focus has been on leveraging the company’s heritage and strong brand recognition worldwide, which has allowed us to experience significant growth in all regions," Akeroyd said in a statement. "Donatella’s unmatched vision has led to the continued and growing success of our brand. I am thrilled to be joining Capri Holdings Limited, which will be instrumental in accelerating our growth globally.”

Versace’s narrow profits, however, point to opportunities for growth, said Mario Ortelli, managing partner of luxury advisors Ortelli & Co. Versace has a brand awareness that’s similar to Gucci or Armani in some markets, “but if you look at revenue, it’s still a fraction of all these brands.” A large part of the gap is down to inconsistent positioning and its inability to grow a meaningful leather goods business, a highly lucrative product category, Ortelli added. “This will be a great opportunity for Michael Kors, but it will require time and excellent execution to eventually achieve it.”

Why Capri Sees Versace as a Good Fit

By buying Versace, Capri will unlock some cost-saving synergies when it comes to getting better deals on real estate and media. But the combined company has a very long way to go before approaching the scale of European conglomerates like Kering and LVMH. Michael Kors, Jimmy Choo and Versace combined brought in less revenue last year than Gucci alone did for Kering.

“I don’t think having three brands brings the same firepower as a player like LVMH,” said John Guy, an analyst at MainFirst. “There are some benefits, though.”

More importantly, Capri’s aspirations to climb upmarket and claim a bigger chunk of luxury sales make sense: total luxury sales are slated to grow by up to 8 percent this year, according to Bain, outpacing the mid-market sector that the company has relied on in the past (65 percent of sales came from mid-priced accessories last year).

Versace also brings expertise in producing luxury apparel — which represents a majority of the brand’s revenue, compared with 21 percent from shoes and 25 percent from leather goods — to the budding group. (Michael Kors ready-to-wear is currently manufactured through a license with Gibo.)

And while Jimmy Choo, Michael Kors and Versace may not align on all fronts, each brand does possess a gold-plated glamour that gives the group a certain recognisable aesthetic glitz. “Kors is jet-setting; it’s a little over-the-top at times and it’s got some bling — that would fit the Versace [aesthetic],” BlueFin analyst Rebecca Duval said. “But luxury really is on fire right now overall… I think everybody is always looking for M&A, and there are still opportunities out there as the macro environment has gotten a lot better.”

Versace Comes at a Steep Price

Many Kors' analysts and investors have questioned how the Italian house, known for its upscale flash, will fit with the American brand, where sales are driven by less outré items, including handbags that typically sell for under $400. Some observed that the $2 billion price tag was far too high for a company that has struggled to grow sales and frequently run at a loss, despite its famous brand. Shares fell 8 percent on Monday.

“Michael Kors is out there looking for luxury brands in general and they’ve bought higher multiples than the market would suggest,” William Blair analyst Dylan Carden said.

However, in recent years, fashion brands have been acquired for far higher multiples, including Balmain, which was bought in 2016 by Qatari-backed investment fund Mayhoola for €500 million ($588 million), or 14 times its EBITDA. In August, Italian fashion group Zegna purchased an 85 percent stake in Thom Browne in a deal that valued the company at €500 million; its annual revenue was just $100 million in 2016.

Capri was not the only firm gunning for Versace, which saw interest from most of the world’s big fashion conglomerates, from LVMH and Kering to US aspirants PVH Corp. and Tapestry, according to media reports. The deal could propel these players to go after new acquisitions of their own.

While there isn't a "broad pasture" of privately held companies left in the sector, a number still remains, said Carden, pointing to Tory Burch investor Tresalia Capital's recruitment of Goldman Sachs to explore a potential sale of its stake earlier this year. "Furla's out there, Longchamp is out there, so [they] have the opportunity."

Founded in 1978, Versace has recently ridden a wave of late '80s and early '90s nostalgia by referring back to some of the most iconic looks designed by late designer Gianni Versace, who was assassinated in 1997. The rise of the label and the designer’s untimely death were documented in the 2010 book “House of Versace,” by Wall Street Journal reporter Deborah Ball, as well as American television auteur Ryan Murphy's 2018 series,“The Assassination of Gianni Versace: American Crime Story,” which was based on the 1999 book by Vanity Fair writer Maureen Orth.

Creative director Donatella Versace has led the house since her brother’s passing, although there has been success speculation over the past two years. Riccardo Tisci, once a favoured pick, joined Burberry instead, while Kim Jones — another oft-mentioned name — recently moved from Louis Vuitton to Dior.

In a statement, Idol said that Donatella will continue to lead creative at the company. “Donatella’s iconic style is at the heart of the design aesthetic of Versace," he said. “I am thrilled to have the opportunity to work with Donatella on Versace’s next chapter of growth.”

But regardless of how long she remains in creative control, the global brand recognition of Versace makes it a compelling prospect. With under $1 billion a year in sales, it is far behind conglomerate-owned rivals including Louis Vuitton, Gucci and Saint Laurent, the latter of which was also founded as ready-to-wear house, not a leather goods maker. Opportunities to expand its accessories and beauty offerings, and to widen its pricing architecture, mean there is high potential for growth. (The brand recently collaborated with streetwear-favourite Kith, indicating that there is appetite to do more beyond its secondary Versus line.)

But the question remains: is Capri the player to best capitalise on the opportunity?

One thing is for certain. Blackstone, which will earn about $120 million on its roughly $280 million investment, is yet another private equity firm set to make a significant return on an apparel company — and in less than five years.

"Blackstone has had the privilege of working with Donatella and the management team over the last five years, and we played an integral role in helping accelerate Versace’s growth," Blackstone chairman and chief executive Stephen A. Schwarzman said in a statement. "We now wish Versace continued success as it embarks on its next chapter."

There was a time when the world of private steered clear of fashion. No longer.