MILAN, Italy — At Alessandro Michele’s first show for Gucci in 2015, few in attendance would have predicted that the opening look of the collection would feature what is now one of the brand’s most popular items.

Gucci’s GG logo belt has become the brand’s blockbuster product, maintaining its status as one of fashion’s hottest items, according to Lyst, a global fashion search platform. The belt has featured in Lyst's Index of fashion’s top 10 performing items in six out of the past eight quarters. In the fourth quarter of 2018, two Gucci accessories — the GG logo belt and the Soho cross-body bag — drove twice as many orders as the other eight products combined. (Gucci doesn’t break down sales of individual products, but a spokesperson described the belt as “a signature of the House.”)

Even now, the popularity of the Gucci logo belt doesn’t appear to be waning. So far this year, it has been the most searched-for accessory for both men and women, according to Lyst, which analyses social media, e-commerce sales and internet search data. Within the belt category, Gucci draws in over four times the number of searches than the second most-popular label, Off-White.

The secret to its success? A formula of sweet-spot pricing, clever merchandising and heavy social media appeal.

“[It’s] a stealth hero product,” said Katy Lubin, vice president of communications at Lyst. “It plays into the logo mega-trend, has a relatively accessible price point, and has been endorsed repeatedly by powerful celebrities and influencers.”

It’s a stealth hero product. It has a relatively accessible price point, and has been endorsed repeatedly by powerful celebrities and influencers.

Like many luxury brands, Gucci generates the majority of revenues from leather goods. Last year, the category accounted for 57 percent of the brand’s €8.3 billion ($8.9 billion) in sales. Traditionally, handbags have been the major revenue-drivers for brands, generating buzz and high-margin sales with classic “It” styles.

But as the handbag market has become increasingly overcrowded, luxury brands are diversifying their pool of signature products, marketing cult “It” items within accessories and footwear. In Gucci’s case, its classic Dionysus and Marmont bag styles have been joined by the Ace sneaker, the Horsebit loafer and the GG logo belt. Shoes and belts are generally more affordable than bags, which, in Gucci’s case, often cost upward of €1,500. 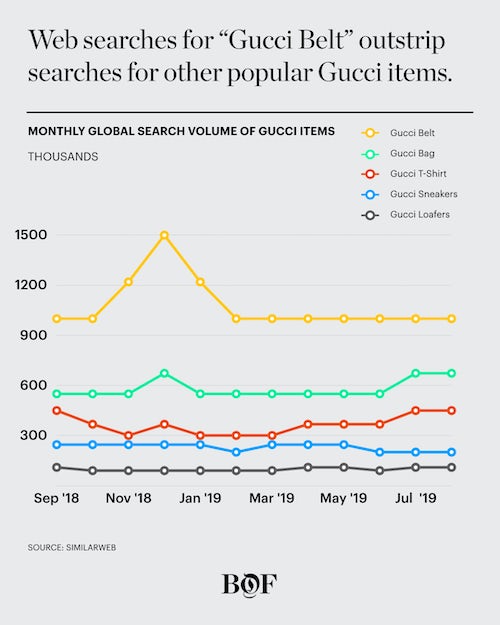 The GG logo belt is an entry-level item for Gucci aspirants: at €320 ($345), it is priced at a more accessible point than other core items, while still being expensive enough to feel like a true luxury purchase. And, it’s these lower-priced hero products that helps the brand to be more inclusive of younger consumers, with whom Gucci’s brand identity strongly resonates. Last year, 62 percent of sales came from shoppers aged under 35, while under-24-year-olds are the brand’s fastest-growing consumer segment.

The belt “allows brands like Gucci to rake in revenues of the mass market that they otherwise wouldn’t be able to do. And that is a huge part of the growth of the brand overall,” said Lorna Hennelly, fashion and beauty analyst at Euromonitor.

Despite its accessible price point, however, the belt isn’t marketed as a “cheaper” alternative to Gucci’s high fashion collections. It has been a regular fixture on Michele’s catwalk ever since it was first shown in 2015. This ensures that luxury consumers, who are increasingly mixing lower-priced, trending items from Insta-famous brands with high-end purchases, still find the belt an appealing proposition.

A large part of the belt’s broad appeal to multiple categories of luxury shoppers actually lies in its simplicity, said Ana Correa, associate editor of accessories and footwear at WGSN. It plays into the logomania trend without being too ostentatious, making it an attractive piece to trend-conscious and more conservative consumers alike, regardless of shopping budget.

“This has been a piece that has transcended age and income brackets,” she said. “It’s reachable — and that’s why it’s become so successful.”

According to Tribe Dynamics’ data, social media posts from “ambassadors” — a term it uses to describe celebrities and influencers, brands, retailers and publications — containing the hashtag “#Guccibelt” average between three and four posts every six months per ambassador.

“A brand like Gucci has thousands of content creators … They’re going to have top-tier partners that they work with more deliberately, but the broader bulk of content and engagement from a consumer standpoint is about the more accessible lines,” McCorquodale said. 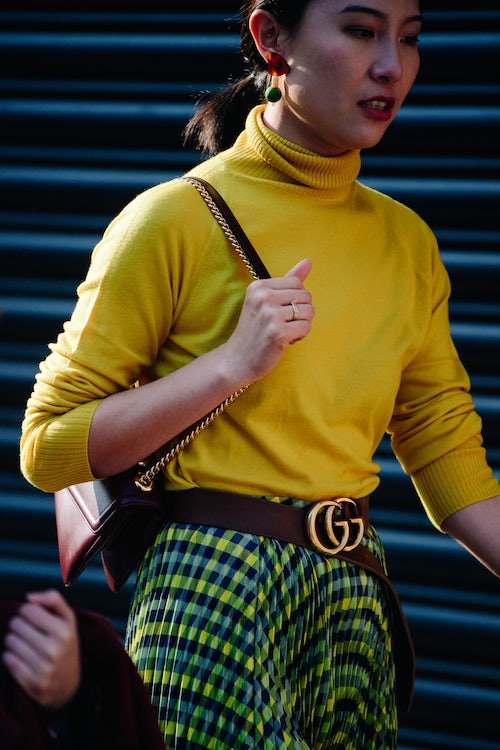 But, as with any social media hit, there’s a danger of overexposure, which can cheapen the integrity of a product and lessen the appeal of the brand. In the case of Gucci, high cultural visibility may be starting to undermine the belt’s — and, by extension, the brand’s — cult status.

“It’s really reached the mass market, and it probably is at the stage where early adopters and people that are insiders in the industry have moved away from pieces like the Gucci logo belt,” said Hennelly, noting that, among fashion insiders and influencers, fellow Kering brand Bottega Veneta has emerged as the new hot label.

It’s doubtful that the logo belt would be such a commercial hit were it not for Gucci’s white-hot status, which is also showing signs of starting to cool. Growth at the house has slowed dramatically: this latest quarter, sales on a comparable basis rose 13 percent, compared with 40 percent over the same period in 2018. And, an incident earlier this year, where the brand released a sweater resembling blackface imagery, has dampened the brand’s woke reputation and led to significant consumer backlash.

But while the fashion pack may have moved on, it seems that, more broadly, consumers still can’t get enough of Gucci’s logo belt. Lyst’s Lubin still rates it as a “super-hot product,” while London-based boutique Browns said the accessory remains one of the retailer's top-performing styles in the category.

“When this logo launched across leather goods we saw an amazing traction,” said Hollie Harding, Browns’ non-apparel buying manager. “We have now seen it develop into a wardrobe staple, which we continually sell out of. We don’t see demand slowing yet.”

Is Inclusivity the New Exclusivity? Gucci Certainly Thinks So

What Gucci Learned From Dapper Dan and Its Blackface Crisis