Gucci’s Slowdown Continues but Bottega Veneta Is Picking Up Steam

Kering’s third-quarter results showed a stabilisation in its biggest brand and a negative impact from the political upheaval in Hong Kong.

PARIS, France — Gucci’s pace of growth slowed further in Kering’s latest financial results, but some of the luxury conglomerate’s other brands appeared to be picking up some of the slack.

In the third quarter, Gucci’s sales grew 10.7 percent on a comparable basis to €2.4 billion ($2.7 billion), with the vast majority of that growth coming from the Asia Pacific region. The gains topped many analysts’ expectations, though they were a far cry from the boom years of 2017 and 2018, when sales soared by nearly 30 percent annually. Overall, Kering’s total revenue grew 11.6 percent to €3.9 billion ($4.3 billion) in the quarter.

For much of 2019, Saint Laurent has outpaced its bigger sister brand, with sales expanding by 10.8 percent in the third quarter to €507 million ($563 million). Meanwhile, Bottega Veneta’s relaunch under its new leadership —Artistic Director Daniel Lee and Chief Executive Bartolomeo ‘Leo’ Rongone — which kicked off with Lee’s runway debut in February 2019, is starting to pay off. Sales grew 7 percent on a comparable basis after declining in the first half of the year by 4 percent (before a significant amount of Lee’s designs hit stores). Kering Chief Financial Officer Jean-Marc Duplaix said in an earnings call that the brand’s ready-to-wear and accessories are resonating with younger customers, especially in the United States and Europe. 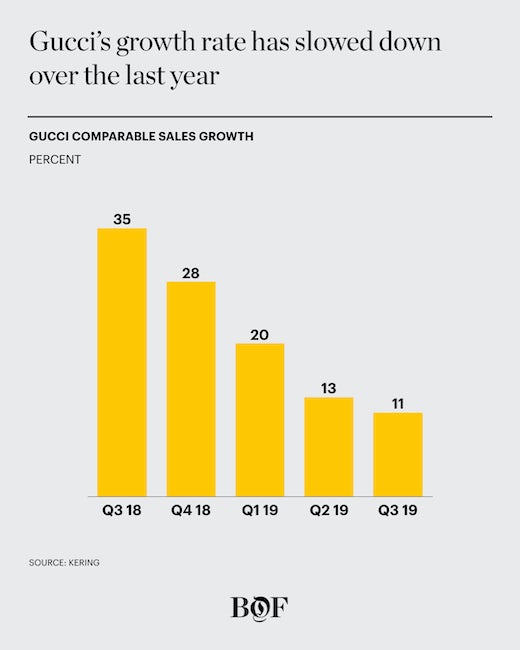 The situation in Hong Kong was a problem for Kering, as violent protests deterred consumers from spending in what was until recently one of luxury’s most important shopping destinations. Overall sales from the city were down 35 percent, though the Asia Pacific region was still up by 17 percent. Duplaix said August was the weakest month of the quarter, but said September saw some of those lost sales offset in mainland China.

But all eyes are on the performance at Gucci, where analysts are watching to see how the brand is impacted by a slowing growth rate after years of rapid expansion — and if Kering’s smaller brands like Bottega Veneta and Alexander McQueen can pick up some of the slack.

In September, Gucci Artistic Director Alessandro Michele presented a shift in aesthetic for the brand on the runway in Milan, which may boost sales as more-understated products hit store shelves.

Gucci sales in North American declined for the second quarter in a row by 2 percent. Duplaix cited decreased traffic in the US and other market challenges but said some of that decline is offset by purchases by Americans while travelling abroad in Europe. (Sales in Western Europe increased by 12 percent.) He said Gucci plans to increase its marketing in the region, which it held off until September following the blackface balaclava controversy, and host more store events featuring personalised products.

“As they step up marketing dollars in America in 4Q19E, though, I’d expect the situation there could potentially improve,” said Luca Solca, the head of luxury goods research at Bernstein.

Morgan Stanley equity analyst Edouard Aubin said in a report that the Gucci business has become “increasingly dependent on one nationality,” Chinese nationals, and one age group, Millennials and Gen Z, which has increased Kering’s risk profile since Gucci represents about 60 percent of its revenue.