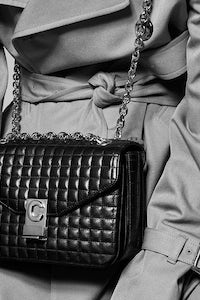 PARIS, France — On Monday, just as luxury retailers in the US get ready to begin marking down fall merchandise, some of the spoils of Hedi Slimane’s Spring/Summer 2019 collection for Celine will arrive in 16 boutiques across the globe, from Beverly Hills to Shanghai. The pièce de résistance is Slimane’s ‘16’ bag, a top-handle style spotted on Lady Gaga in the weeks before his wildly polarising, endlessly discussed runway debut at Paris Fashion Week in September. The launch will also include the quilted "C" bag, the ‘Triomphe’ clasp bag, chunky chain-link accessories as well as small leather goods.

While the off-schedule release should not be strictly categorised as a traditional product drop — these are accessories that are set to be part of the permanent Celine collection, not a limited-edition capsule with a short availability window — the approach is emblematic of a shift in luxury fashion currently taking place. No longer must a brand flood the market with their goods at the beginning of each season. They can serve up items whenever they please, creating newness for a consumer who wants to be engaged all year long.

This fall, several luxury brands have played around with drops, from Burberry — which let loose a series of Riccardo Tisci-designed items available to purchase for 24 hours only — to Louis Vuitton, which built a pop-up store in London to house men’s artistic director Virgil Abloh’s debut collection. Moncler’s ‘Genius’ project, a series of month-long collaborations with fashion luminaries including Craig Green and Pierpaolo Piccioli, is well underway.

Of course, this approach to delivering product is far from novel. In Japan, brands have kept shoppers interested by introducing new items at a regular clip for decades. But it is the success of streetwear labels like Supreme, which famously drops its product every Thursday, that has given the concept global relevance. As traditional retailers have struggled to offer consumers compelling reasons to shop with them on a regular basis, new entrants that employ the drop model — like Everlane, which releases a few new items every week — are filching market share.

But luxury brands need more than newness for this model to succeed. Streetwear is centred on community as much as it is design; waiting in line for your limited-edition t-shirt is part of the experience. Brands run into trouble when they treat the approach as a trend — something they must be a part of in order to seem “with it” — rather than a shift in consumption that requires changing not only in how a product is marketed, but also manufactured and distributed.

“To change the culture is everything,” Moncler chief executive Remo Ruffini told BoF in October. “You have to try convince people around you, the team around you, that the business needs to change.”

So far, this autumn’s drops have at least generated notable consumer buzz. During September 2018, #ThomasBurberryMonogram drove more than $100,000 in earned media value for the brand, and #TheBSeries drove over $130,000, according analytics firm Tribe Dynamics. Overall, Burberry’s earned media value was $9.6 million for the month, up from $5.4 million from August. Tribe attributed the jump to the chatter around the new drops, as well as an increase in content around the runway show.

“As long as companies embrace the idea that they have to surprise consumers – with new products, new in-store activities, new communication – I would conclude they ‘get it’,” said Luca Solca, head of luxury goods at Exane BNP Paribas. “Then it is a matter of execution and whether or not they hit the nail on the head with what they do.”

Is Slimane’s ardent fan base passionate enough to create a genuine product frenzy? “My impression is that Slimane’s first steps at Celine have been very encouraging,” Solca said. “He has stirred a debate on the brand and attracted attention to it.”

How to Hire for Fashion’s New World Order