NEW YORK, United States — On a sticky autumn day in Manhattan’s Meatpacking District, pedestrians walking down 10th Avenue and turning left on 14th Street might have clocked a velvet rope, bathed in glowing red light emanating from a gallery space. Inside, the curious were greeted by a smiling concierge welcoming them to the Hermès Carré Club, a magical makeshift pop-up dedicated to one of the French luxury brand’s more accessibly priced, high-volume products: silk scarves.

After submitting their personal “membership details” on an iPad, including name and email, visitors were encouraged to peruse stations where a handful of the artists who create the prints that cover Hermès scarves were on-hand, sketching out new creations in a demonstration of the craftsmanship that is a key pillar of the company’s approach. A gentleman painted portraits rendered in signature Hermès orange, while two handsome Central Saint Martins graduates swirled designs onto their hand-made, wrought-iron "drawing machine."

On the walls were vintage Hermès colour swatches, which guests were prompted to name. (Suggestions included “Bill Cunningham Blue,” “First Husband” — for a muted taupe — and “Gin,” a silvery grey.) There was a “Carré-oke booth” — get it? — and a café that served free coffee and staged jazzy concerts each evening. And yes, should you want to buy something, there was a capsule collection of scarves designed especially for the event. 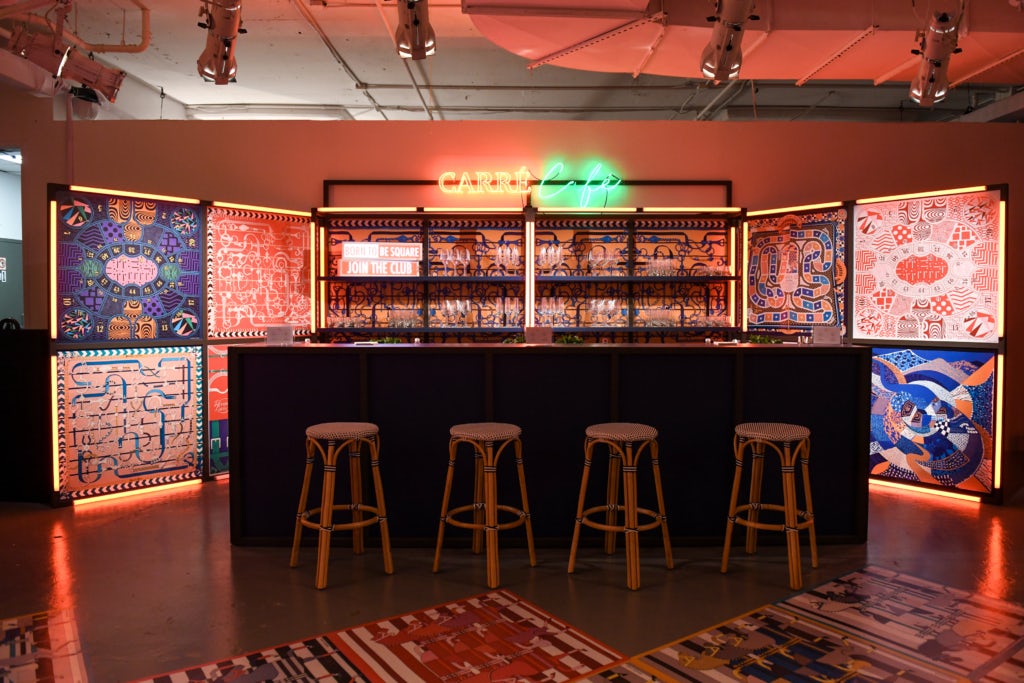 This open-to-the-public, four-day experience — which is also traveling to Toronto, Singapore, Los Angeles and Milan — was designed to help position Hermès not as stiff, snobby, or exclusive, but playful, engaging and inclusive. Sure, the company sells five-figure Birkin bags, but it also sells “Twilly” tie-neck scarves for $160, underscoring one of the company’s core skills: conjuring a halo of perceived exclusivity over a wide range of products, while balancing an image rooted in both high luxury status symbols and a young-at-heart whimsy.

Category segregation is critical to the company’s strategy. Hermès confines iconic, core-category products like bags to high-end price ranges, while offering other categories, like scarves, at lower price points to aspirational consumers. But so is brand storytelling. And yet, curiously, the 181-year-old house, majority-owned by the Hermès family and run by sixth generation heir Axel Dumas, does not have a marketing department. Instead, it employs a communications team to manage press and media buying and a creative team to conceive seasonal campaigns. (This year’s theme is “Let’s Play.”)

“You know, we don’t do marketing,” explains Bali Barret, artistic director of the women’s universe at Hermès, who oversees ready-to-wear, shoes, accessories and scarves. Both Pierre Hardy and Nadège Vanhee-Cybulski — who shows her latest ready-to-wear collection in Paris on Saturday — report to her. Barret also serves as the liaison between the company and the hundreds of artists that design its scarves.

It’s about emotions and sensitivity, but not being too serious.

“The scarf represents the fantasy and humour of Hermès; it’s an affordable object compared to most of the things we’re doing and that makes it younger,” she adds. “There’s a lot of freedom in it. Sometimes, the image can feel conservative, so we have to keep updating, telling again and again that it’s still creative, contemporary.”

It was Barret who oversaw the conception of the Carré Club, recruiting several of her star scarf makers to join the travelling band in each city. Sitting at one of the on-site cafe’s tiny tables, the floor of the space skinned with a scarf print, Barret is wearing one-of-a-kind Hermès merch — a grey sweatshirt embroidered with “Hermès Club” in cursive — with a navy blue and red-striped scarf wrapped securely around her neck like a choker. In today’s streetwear-fuelled fashion cycle, customers would pay a good price for one of those sweatshirts. But it’s not for sale. “We have lots of requests,” Barret says, noting that she did have one made for Vanhee-Cybulski. 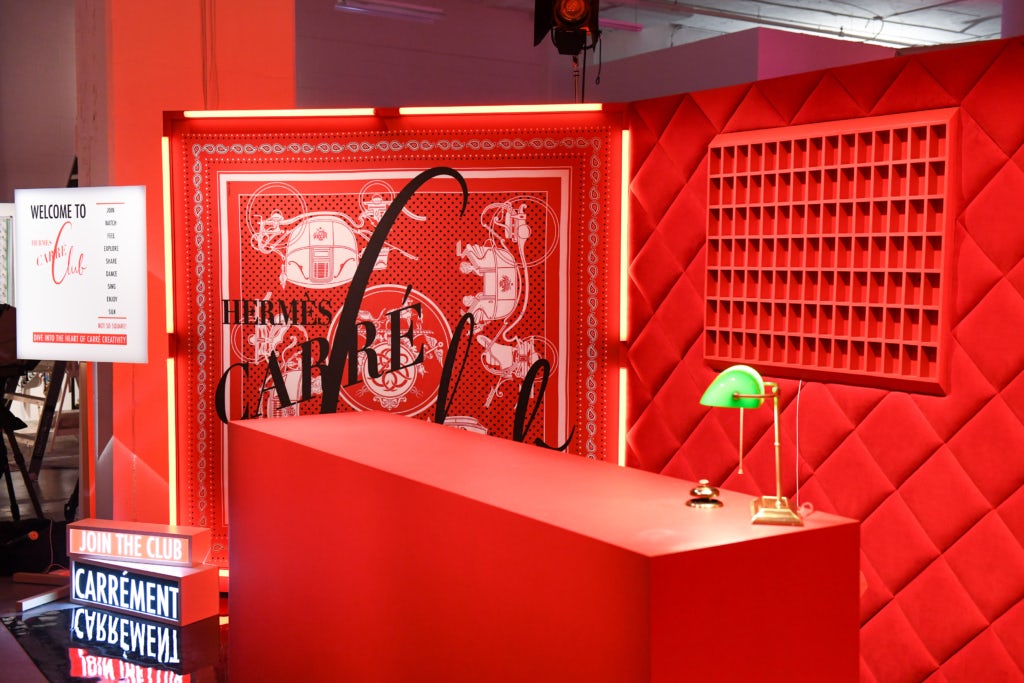 The Manhattan leg of the Carré Club tour was also a testing ground. Next spring, Hermès plans to open a flagship in the neighbourhood, which is flooded with tourists thanks to The High Line — an elevated park on old freight railway tracks — the Whitney Museum of American Art and an impressive mix of restaurants and retail stores and close enough to the West Village to attract a local clientele too. The bits of data collected at the "membership desk" will help sales associates begin to forge relationships early on

In many ways, Hermes’ “anti-marketing marketing” approach checks many of the boxes of a traditional marketing strategy. Hermès still wants to engage customers and find new ones through communication. And it’s certainly a major investment. In 2017, the company spent €275 million ($323 million) on “communication expenditure.” (The company declined to clarify exactly what that encompasses.) But its approach is less clinical than most: there’s a sense of humanity and humour.

At Hermès, the structure of the organisation adds another layer of employee accountability. The heads of each region choose whether or not they want to host one of these projects, instead of Paris dictating where it will be staged. (It mirrors the way in which the company merchandises its stores: buyers from each outpost attend an event twice per year in Paris, where they place orders customised to their clientele.) “We want people to experience something different in every store," Craen said.

“It’s about emotions and sensitivity, but not being too serious,” Barret added. “It’s just scarves.”

Hermès Is Primed for the ‘Californication’ of the World, Says CEO