NEW YORK, United States — Andreas Aresti, the 26-year-old New York-based creative behind new womenswear label Lourdes, had always wanted to launch his own brand. But he wouldn’t call himself a designer.

“I never really was one,” Aresti told BoF. “I never went to college for fashion. If you asked me to sketch something, I couldn’t draw a circle.”

Instead, he prefers to find fabric or an existing garment, “turn it upside down, inside out and cut out holes to find new shapes.” It’s easy to see this approach in Lourdes’ debut, which is replete with reworked versions of fashion mementos: a favourite tank top was converted into a skirt (around $211), while a signature little black dress (around $742) was jerry-rigged out of an old jacket from his mother, whom the brand is named after. But Aresti’s design process isn’t the only thing sets his brand apart.

Aresti unveiled Lourdes with business partner Alfredo Canducci during Paris Fashion Week. According to Canducci, a Tomorrow Ltd. alumnus and founder of incubator System Preferences, the launch marked one of the most successful sales campaigns of his career. Selfridges, Ssense and LNCC are among the retailers who will help bring the debut collection to his target audience, who Aresti describes as “someone that streams Netflix like me, orders food on Caviar like me, but also understands the value of tradition.” 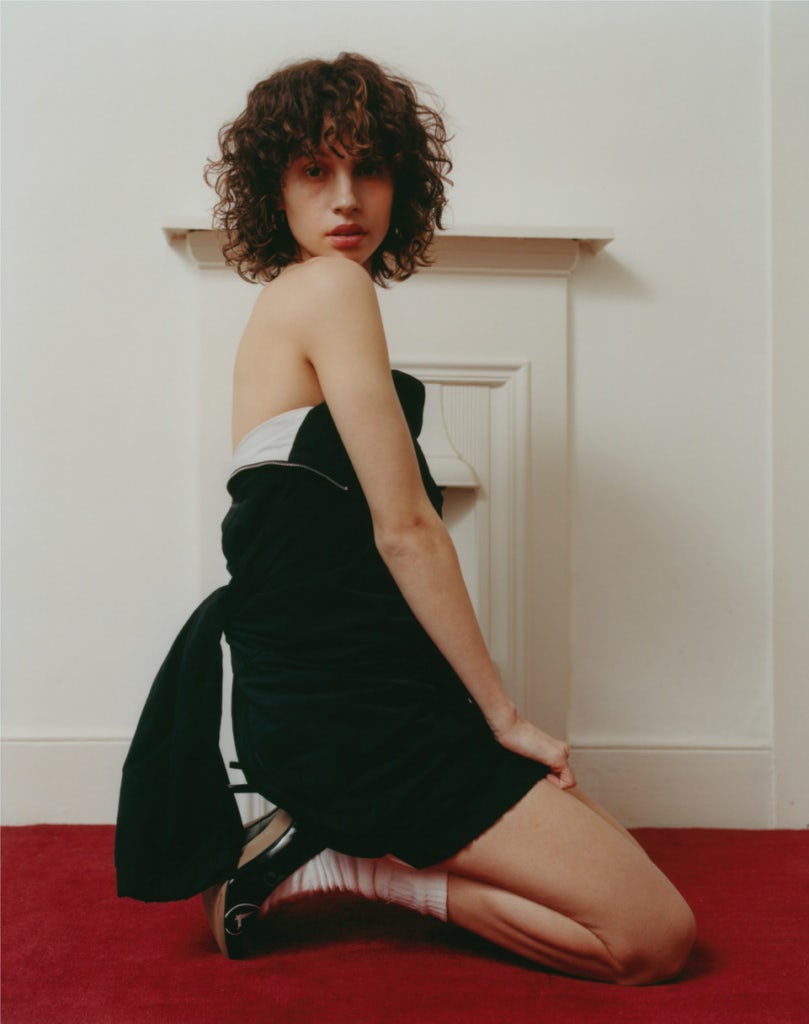 Appealing to a younger shopper comes easily for Aresti, who is also currently working with Hood By Air's Shayne Oliver. His CV reads like a who’s who of fashion’s most influential menswear designers, having worked with Tim Coppens, Nicola Formichetti, Kanye West and Stefano Pilati on the launch of Random Identities. But his roles, despite often intersecting with design, have centred on marketing, content creation, consulting and styling.

Lourdes is the accumulation of this unique pedigree. “There’s some Stefano in there, there’s some Kanye, but it’s super personal,” he said. “I’m trying to marry the experiences I’ve had with what people want.”

Canducci helped build this consumer focus into Lourdes’ business model by investing in the brand through Network, a joint venture between his company and Italian manufacturer Rilievi, which embroiders collections for the likes of Prada and Bottega Veneta. By linking arms with Rilievi, System Preferences joins the likes of Tomorrow, New Guards Group and Dover Street Market in adopting an all-service platform model to launch and grow independent labels. Lourdes is Network’s first investment.

The structure allows Aresti to operate more flexibly and with more resources at hand, whether by producing smaller volumes for drops and bespoke items for celebrities; closely integrating customer feedback; or ensuring price points correspond with market demand. It also means that Lourdes will release only two collections per year and deliver product to retailers and consumers at the end of May, months before other brands’ collections hit stores — options that an independent, emerging label would rarely consider.

This makes sense given Aresti’s goal which he articulates as being able to “manoeuvre and transition into a direct-to-consumer brand.” This is no small feat given that the DTC marketplace is increasingly dominated by luxury groups and well-funded start-ups. Lourdes’ relationship with Network will allow it to cut down on losses stemming from selling products to retailers at wholesale — a model that start-ups like Everlane have long championed, but one that hasn’t yet taken off among independent designers.

“It’s almost impossible for a designer to be independent now because of production demands, cost of marketing, everything is too expensive,” said Canducci. “[This] partnership allows us to activate different channels, manage logistics, customer service, e-commerce all together.”

It’s almost impossible for a designer to be independent now.

Given his social ties to stateside designers like Telfar Clemens and Shayne Oliver, Aresti saw firsthand the difficulties creatives faced when starting a brand outside Europe, where the bulk of incubator platforms and major support systems for young brands are based. “It doesn’t feel like there’s true support [in New York],” he said. “New York is part of me, but there are no buyers in the city.” Lourdes’ business model is intended to help bridge the gap between its community and commerce.

In the same vein as his predecessors Virgil Abloh and Clemens, Aresti wants to make the brand a vessel for community and cultural exchange. Both designers have grown their communities by fusing distinctive design with ingenious branding to create something people identified with and wanted to be a part of.

In light of these ambitions, calling Lourdes just a fashion brand feels reductive. “Because we offer product, we’re considered a brand,” he said, “but I’m not defined by any clothing I’ve ever made — fashion is just a vehicle to get me there.” As a child of immigrants (his mother is Peruvian and his father Greek-Cypriot), Aresti aims to hire and empower young, disenfranchised creatives to give them a seat at the table.

Moving forward, the key for Aresti and Canducci will be to maintain a consistent presence across marketing and retail channels while thinking beyond direct-to-consumer and apps like Tiktok to welcome the next platform, format or trend.

“There will always be newness, I don’t think that part of fashion will ever go away,” Aresti said. “However, I think that everything else around that can, and should change.”