LONDON, United Kingdom — Roman mythology is more likely to appear in the narratives of luxury houses than in their business memos. Yet the two-faced god Janus Bifrons is a fitting allegory for the strategy behind many of today's most successful jewellery brands.

In recent years, these companies have serviced the super-rich with lavish, gem-encrusted pieces priced over $100,000 – items defined as "high" jewellery – while sating the masses’ voracious appetite with designs that start at $1,500, sometimes even less.

As the middle class grows in developing countries, sales of entry-level jewellery pieces are expected to balloon. Cultivating desirability at opposite ends of the price spectrum propelled the branded jewellery market to €21 billion ($23 billion) in 2019, up 133 percent from €9 billion in 2010, according to Bain & Company. (Total fine jewellery sales, including unbranded jewellery — or items sold at mom-and-pop stores without a label — were €200 billion last year.)

As the middle class grows in developing countries, sales of entry-level jewellery pieces are expected to balloon.

Because so much of the jewellery sold in the world remains unbranded, there is room for major names to grab additional market share. The past few years, however, have shown that the opportunity lies in entry-price lines, not six-figure pieces. Products above $100,000, while important, typically represent just 5 percent to 20 percent of established jewellers’ overall sales, according to estimates by market sources, while pieces that are priced above $30,000 represent about 30 percent.

That upper-end segment of the fine jewellery market is “volatile,” said Jean-Christophe Babin, chief executive at Italian jewellery house Bulgari, which LVMH acquired in 2011. “One year it can grow by 50 percent and the following decline by 30 percent.”

On the other hand, “precious” jewellery — more affordable items, including engagement rings, gold bracelets and the like — typically make up more than half of a house’s sales and are a more consistent business, with consumers purchasing multiple items over the course of a lifetime.

“Iconic products are what make an international jewellery brand,” said Boucheron Chief Executive Hélène Poulit-Duquesne, whose $3,957 “Quatre” ring is the Kering-backed brand’s bestseller. “The daily business is sustained with icons.”

In January 2019, Boucheron launched "Jack," a bracelet that fastens like a cable cord and starts at $4,620 for the 18K yellow gold version. “Jack is also important for us in terms of storytelling and the expression of our brand,” Poulit-Duquesne said. “We want our jewellery to be playful and to express the personality of the women who wear them."

For Jack’s launch, Boucheron installed photo booths in its stores where clients could snap — and crucially share — pictures of themselves wearing the new design, following the examples of the influencers such as Doina Ciobanu, with whom the brand partnered.

An entry product has the potential to become the first [purchase] in a lifetime of branded memories.

Status symbol products — such as the Cartier “Love” bracelet, which starts at $4,050 for the small version in yellow gold, or a Tiffany solitaire diamond, which can be purchased for as little as $1,420 for the classic Tiffany “Setting” in gold — are associated with important life milestones, from births and birthdays to weddings and anniversaries.

“An entry product has the potential to become the first [purchase] in a lifetime of branded memories,” said Rebecca Robins, global luxury lead at Interbrand and co-author of Meta-Luxury: Brands and the Culture of Excellence.

Of course, entry-price lines have long been a moneymaker for fine jewellery brands. American jeweller Tiffany & Co., which LVMH made a deal to acquire in 2019 for $16.2 billion, is best known for its silver offering, and relies heavily on its engagement and entry-price lines. Engagement jewellery alone made up 26 percent — or nearly $1.2 billion — of the brand's $4.4 billion in net sales in its 2018 fiscal year.

But several more houses, many of which traditionally sit further upmarket than Tiffany, have also introduced a range of more affordable designs over the past two years. Dior Joaillerie added more accessible designs to its “Rose des Vents” line, including single earrings starting at $920 around the 2019 holiday season. This month, Chaumet is introducing “Jeux de Liens Harmony,” a collection of medallions priced from $1,490.

In the fall of 2019, high-jewellery specialist Graff launched its diamond collection “Threads,” which starts at $8,500 for a diamond pendant and is aimed at clients who “wear diamonds not just for special occasions but as everyday jewels also,” said Chief Executive François Graff.

While there are far more expensive items in the collection — including a $95,000 bracelet — advertising Threads' entry-price pendant has enabled the London-based, family-owned company to lure a wider audience into its stores, sparking a rise in enquiries via the brand's website, as well as its social platforms. Graff noted a "marked increase in self-purchasing, especially across our jewellery collections, with women no longer waiting to be gifted diamonds."

However, the biggest splash may have been made by Cartier, whose “Clash” line launched in the spring of 2019 and, starting at $2,120 for a ring, is already a certified hit for the Richemont-owned brand.

Entry-price jewellery will fuel the luxury jewellery customer base growth until 2025.

The growing middle class, especially in Asia, is enthralled. According to the latest luxury market report released by Bain & Company, entry-price jewellery will fuel the luxury jewellery customer base growth until 2025.

For jewellers, scaling an entry-price line is also easier from a production perspective. While an item of high jewellery can take thousands of hours to be completed and sometimes many years — especially when sourcing unique precious stones — semi-accessible precious jewellery is easier to craft.

And while high jewellery often requires a great deal of pomp and circumstance in order to close a sale — Bulgari recently privatised the whole island of Capri to present its new flamboyant “Cinemagia” collection to about 200 clients — affordable icons sell effortlessly in stores or with a few clicks online. 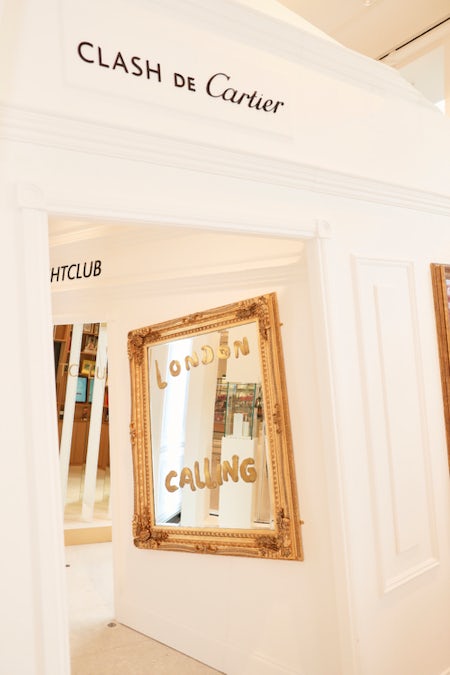 They are also sold through different channels. While high jewellery brands tend to prefer doing business in their owned boutiques and select multi-brand department stores, the retail plan for these lighter lines is looser. Cartier launched “Clash” in the UK via a pop-up store in Millennial magnet Selfridges and in Russia at multi-brand fashion boutique Aizel.

But perhaps more than anything, these gateway purchases serve as a marketing tool similar to the way a keychain does at a leather goods label. They are also advertised differently, with campaigns featuring social media stars like Bella Hadid, who fronts Bulgari’s “B. Zero1” collection, Cara Delevingne (Dior’s “Rose Des Vents”) and Gigi Hadid (Messika).

“Cultivating desirability, but excluding affordability, would lead only to frustration,” said Jean-Marc Mansvelt, chief executive of Chaumet, who added that many clients first buy affordable items then trade up to more expensive creations. “Commitment grows with time.”

Diffusion lines may have proven good for business, but can their ubiquity undermine the brand’s promise of exclusivity and ultimately diminish the fantasy? Some jewellery houses with “price depth” have managed to maintain credibility while selling items across price points. But this magic can only be achieved when “innovation remains key, and a good balance is maintained between high-end and entry-price,” said Luca Solca, an analyst at Bernstein Research.

It’s a challenge that LVMH faces with Tiffany, which has a bifurcated business that doesn’t always jibe into one brand message. Some argue that accessible silver jewellery, costing as little as $135 for Paloma Picasso's "Graffiti" single earring, diminished the desirability of its pricier offering, which reaches well into the six figures. Now under the LVMH fold and protected from the pressure of delivering quarterly results, the American jeweller may be able to define a clearer identity that properly reflects both sides of the story.