How Floristry Became a Fashion Business

As the business of flowers becomes increasingly trend-driven and social media savvy, fashion folk are tapping the opportunity.

How Floristry Became a Fashion Business

As the business of flowers becomes increasingly trend-driven and social media savvy, fashion folk are tapping the opportunity.

LONDON, United Kingdom — In fashion, flowers are not just for Valentine’s Day – they’re for please, thank you and, quite simply, for life. Fashion’s affinity for floristry became larger than life when for Raf Simons’ debut haute couture show for Christian Dior in 2012, he famously commissioned Belgian florist Mark Colle to bedeck the walls of a 16th arrondissement hôtel particulier with thick beds of flowers, each room a different colour and variety. Overnight, the “flower wall” trend was born and would become a popular request for Instagram-friendly weddings and industry events. Perhaps contrastingly, the pre-collection appointments for Céline are notoriously Instagram-unfriendly (taking photos of the clothes in the showroom is banned) but photos of the range of succulents, hothouse foliage and fougère ferns are permitted, and as a result they quickly proliferate on social media into décor phenomena — the French brand ignited a craze for cheese plants and palm leaves after including them in Juergen Teller-lensed campaigns. 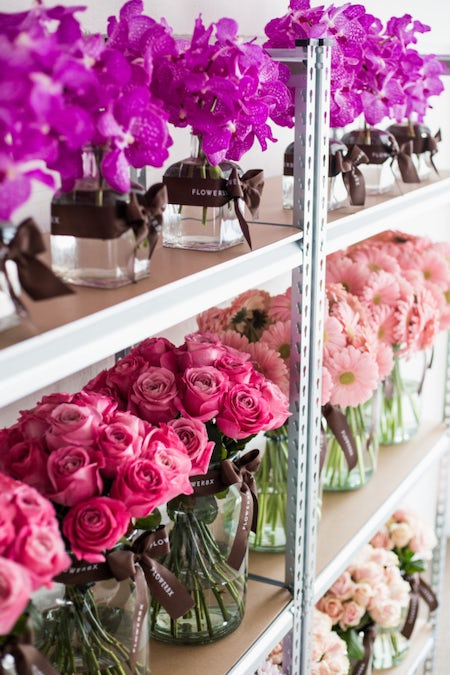 It’s clear that fashion has always had a love of floristry. Christian Dior would name his designs after flowers from his beloved Granville garden and Roy Halston would spend six-figure sums on white orchids at the height of his career. Now, the higher end of floristry is becoming an increasingly fashion-like business. Social media and fashion moments ignite horticultural trends; in turn, some fashion folk are creating floristry businesses that are disrupting the market with international, tech-savvy services, while others are seizing the opportunity in more traditional operations.

“Have you ever seen more flowers exchanged than in fashion?” asks Whitney Bromberg Hawkings, the former senior vice president of communications at Tom Ford, who co-founded Flowerbx in 2015. In her previous job, Bromberg Hawkings would be sending flowers on behalf of Ford and receiving bouquets for the designer from the great and good, both of which were always bunches of single-stem flowers. Her big idea came when she realised that there was no digital service that offered consistency and a simplified, slick approach to sending flowers. “I was buying my clothes on Net-a-Porter and my groceries on Ocado and I couldn’t buy flowers online, so I would have to go to Covent Garden Market in the morning or order from a florist and then you never know what you’re going to get.”

“There’s never been an international flower brand,” adds Bromberg Hawkings, who closed an oversubscribed $1.94 million seed-plus funding round earlier this year and named former Net-a-Porter chief executive Mark Sebba as non-executive chairman and investor (other investors included fashion fairy godmothers Dame Natalie Massenet, Carmen Busquets, Eiesha Bharti Pasricha and Tania Fares). With a negative-capital business (the stock is ordered on-demand from suppliers in Holland with a 48-hour turnaround) Flowerbx could become “the Uber of flower delivery,” according to Busquets.

Bromberg Hawkings certainly has plans for global expansion, with a launch in France this autumn. “The second we nail that and have gotten the concept through in different markets, we can leverage the relationships we have in Holland,” she says. “You go to Prada in Los Angeles, Tokyo or Shanghai and you get the same tissue paper and smell of the product. What we’re offering is consistency of experience, which you just don’t have right now.”

I was buying my clothes on Net-a-Porter and my groceries on Ocado and I couldn’t buy flowers online.

If Flowerbx aims to be the Net-a-Porter of floristry — its branded vans with handsome drivers are quickly becoming a presence in London, just as Net-a-Porter’s black vans once did – then there are also plenty of other independent spirits who want to keep individualistic flair alive. At the most recent Rodarte show at Paris Couture Week, white gypsophila (also known as baby’s breath) and bird of paradise flowers were turned into boas, crowns and striking adornments by florist Joseph Free, who creates bespoke arrangements for clients. “I work out of my place and it’s not a flower shop,” says Free, who is based in Los Angeles and began working with the Mulleavy sisters two seasons ago on flowers and jewellery. “I do personal orders for people and work on films and with an artist called Willem de Rooji, and it’s special and expensive – it’s not just a $150 bouquet of flowers a guy is getting for his girlfriend or surfaces covered in white flowers at a wedding.” 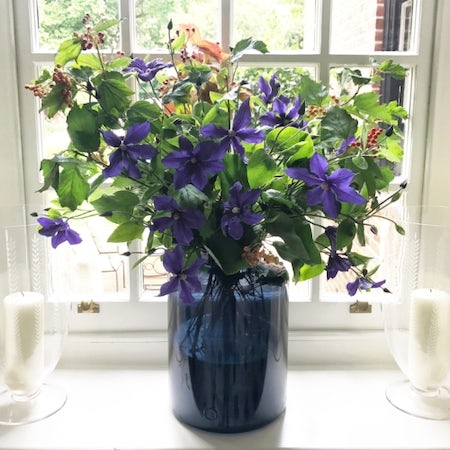 An arrangement of clematis by Melissa Alexander | Source: Courtesy

Melissa Alexander, a former fashion stylist and model agent, set up JamJar Flowers eight years ago, and has built a business based on her love of natural blooms and rustic glass containers. “Flowers and fashion seem effortlessly entwined; the perfect fit; an obvious match,” says Alexander, who adds that social media has been instrumental in her business’s success as she never advertised it. “Global brands of florists sound alien to me — flowers seem to me to have to be made with passion.” Although Alexander is hesitant about florists becoming increasingly similar to global fashion brands, she does acknowledge that they are becoming more trend-led.

“Flower fashions don't change quite as often as the collections do but nevertheless flowers and ways of arranging them go in and out of fashion in exactly the same way,” adds Alexander. At the moment, she cites the work of Saipua and Nicolette Camille as a pervasive influence, both florists based in New York inspired by the Dutch Masters (perhaps not coincidentally Dries van Noten and Jil Sander have both staged shows in recent years around clear boxes of Dutch Master floral compositions). “The there is another trend towards seasonal, locally sourced flowers, meadow style flowers, simple single-stemmed arrangements using seasonal flowers like we did with Fern Verrow at Spring Restaurant. Everything feels very easy and comfortable in its surroundings.”

Eric Buterbaugh, the Los Angeles-based florist whose clients include Chanel, Christian Dior and Cartier, attests that he certainly does see his business as a fashion brand, drawing on his experience working for Gianni Versace in London in the early ’90s and fashion shows he has frequented in his 21 years as a florist. “It is just such a big deal with the fashion industry. A few years ago I thought it would play out, but it’s just grown bigger and bigger and bigger with every season — it’s just never going away,” says Buterbaugh. He has applied the age-old fashion-cum-beauty-brand structure to his own business and, since 2015, has also made floral fragrances and candles, which are sold in Saks Fifth Avenue and Le Bon Marché in Paris. There have also been pop-up spaces in fashion boutiques and department stores such as Bergdorf Goodman. “The world of shopping is changing now and it’s about thinking outside the box,” says Buterbaugh. “People are asking me to do flower pop-ups in their fashion stores and everybody is doing the co-branding or hooking up with someone who has a similar aesthetic, so it’s sort of exciting and different." 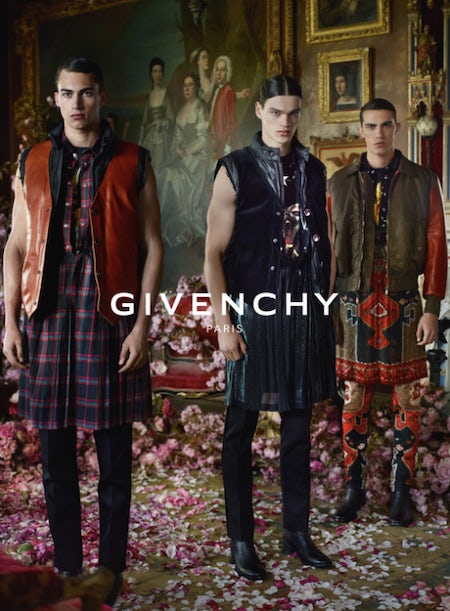 “Flowers have always complimented fashion,” says Flora Starkey, who became a florist five years ago after running her own fashion label, Superfine. Alexander McQueen, Givenchy, Louis Vuitton, Comme des Garçons and Vivienne Westwood are clients. “Working in fashion for years before moving into floristry totally shaped a lot of the way that I approach working with flowers. Apart from the obvious visual connections between the two worlds — colour, shape, texture, composition — it gave me a love of working as part of a creative team.” Starkey’s success is also a prime example of fashion’s love for independent creative spirits in floristry, who go far beyond the single-stem bunches of peonies. She believes working with seasonal plants makes one more creative. “They are both seasonally led in their nature and change throughout the year. I think social media has probably heightened our visual awareness in some ways and made us more discerning.”

Perhaps the antithesis of Starkey’s practise is Bloom & Wild, a UK-based online service which delivers flowers in flat-pack cardboard boxes that fit through a letterbox (they are specially developed to avoid damage to the flowers). Approximately 70 percent of the start-up’s transactions are done on smartphones and earlier this year, it raised $4.86 million in investment, bringing the total investment since its launch in 2013 to $9.4 million.

“Bloom & Wild is 100 percent online, so we have to seek clients and build a brand and for that, and social media is incredible,” says lead floral designer Rowan Lewis, who hails from a fashion background at Matthew Williamson. “It has become a real brand to the point that some clients are superfans. I did a workshop with a group of women recently and it was like they were groupies — they knew all the names of the bouquets and could name ones from years ago that we don’t even do any more.” As for the social media buzz that she generates with fashion-like visual imagery, Lewis has a simple answer for the connection between the two worlds. “Flowers can never look ugly and that’s why they are so great for producing content.”

Can Blanc Build the Net-a-Porter of Dry Cleaners?