COPENHAGEN, Denmark — When three British Vogue editors turn up to work in exactly the same dress — one that has also caught the eye of a handful of Instagram influencers — it’s pretty solid confirmation of a fashion phenomenon. The piece in question, a forest green floral-print ‘40s-style tea dress, priced at a surprisingly cool $120, is just one of the sellout pieces in Ganni’s Spring/Summer 2017 collection.

The Danish mid-market label is loved by fashion insiders for its sweet-spot pricing (it’s stocked at both Net-a-Porter and Asos) and playful mash-up of styles, trends and colours. Today, the brand is set to present its Spring/Summer 2018 show in its native Copenhagen, where buyers from some of its 400 wholesale stockists will be paying close attention for a taste of next season’s hero pieces. If the guest list is anything to go by — photographer Tommy Ton, influencer Pernille Teisbaek, Victoria's Secret Angel Caroline Brach, singer Sky Ferreira and musician Blood Orange aka Dev Hynes — you can probably expect to see it on your own social media feeds imminently.

Ganni is one of the breakout stars of the Instagram boom of the last decade, but that wasn’t always the case. The company was born in 2000 as a niche cashmere label run by a local Copenhagen gallerist with a sales revenue of less than $1 million from two collections of 25 SKUs. In 2009, husband-and-wife duo Nikolaj and Ditte Reffstrup took control of the brand with a vision to create a new affordable Scandinavian fashion player — not as mass market as H&M — that had the potential to go global. “We took it from scratch,” says CEO Nikolaj, who previously worked in the tech industry developing virtual chatbots. “We sensed there was a vacuum for a brand at an advanced contemporary price point because brands like Acne, Isabel Marant, Helmut Lang and Alexander Wang were slowly starting to hike up prices and reposition themselves as luxury.” 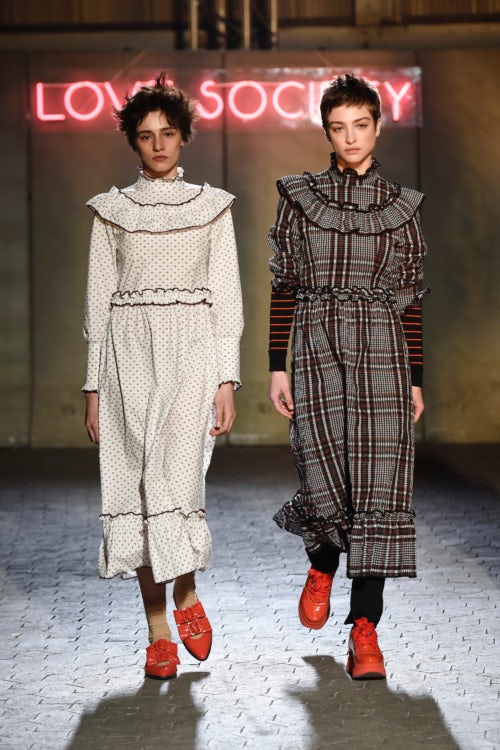 Today, Ganni does annual sales revenue of approximately $59 million and the brand’s offering has expanded to four collections per year with up to 300 items each, covering categories including dresses, casualwear, knitwear, shoes and lingerie. Prices range from $50 for a graphic t-shirt to over $1,000 for biker jackets and hand-embellished dresses. The brand will have 22 of its own stores in Scandinavia by the end of this month.

Ditte Reffstrup, Ganni’s creative director, who designed for the label before she and her husband acquired the business, wanted to create a brand that reflected the unique mix-and-match style of Copenhagen girls who often wear sneakers with their dresses to ride their bikes around the city. “I kept meeting people who thought Scandinavian design was all about minimalism and androgyny, but I didn’t see myself in that,” she explains of the initial concept. “We have three children and we don’t have a car. Its about an effortless and natural, laid-back style.”

Thanks to the couple’s personal connections with Danish models and It girls, as well as their active gifting policy, the brand began to appear in the personal imagery of style influencers well before it became de rigueur to secure tightly-sealed endorsement contracts with bloggers and influencers through official agencies and managers. In 2015, Helena Christensen, herself a Danish export, snapped a selfie with her friend Kate Bosworth for Instagram (both wearing Ganni) and captioned it “#GanniGirls.” “I guess I owe them a beer,” laughs Nikolaj. It quickly caught on and turned into one of the primary engines of the brand’s marketing. Digital influencers such as Pernille Teisbaek and Camille Charrière began ‘gramming their prized pieces, as did Danish models such as Maria Palm, Nadja Bender and Frederikke Sofie (most Danish models return home for the summer, which means they’re available to walk in the Ganni show). “It's tied to this idea of the Copenhagen girl,” adds Nikolaj. Celebrities began to take note. Alexa Chung, Jessica Alba, Alicia Vikander and Kendall Jenner soon wore the brand, buoying sales.

But Ganni’s CEO is careful to stress that social media can be highly unpredictable. A-list celebrity endorsements, for example, sometimes drive no sales at all, “relatively speaking,” he says. “Other times, you can have a girl with 4,000 followers in a regional area in Sweden and she converts to sales extremely well, because she makes so much more sense to her followers,” he says. “It’s interesting trying to identify that pattern.”

The collection has enough breadth for buyers to create their own edit, without losing their own brand identity.

“We first spotted Ganni through their amazing social media presence,” says Lisa Aiken, fashion director at Net-a-Porter. “We immediately noticed the brand’s unique trend-led aesthetic and knew it was going to be a huge hit.” Aiken says that from the launch of the label’s Autumn/Winter 2016 collection, her team has had to re-order every item it sold because of consumer demand. Since they began working together, Net-a-Porter has grown its Ganni buy by over 300 percent. Wrap and lace dresses, as well as printed t-shirts are some of the top sellers. “It’s now one of our biggest brands in the contemporary designer department,” says Aiken. “Ganni has all of the qualities that we look for; it’s cool, contemporary and offers effortless and easy-to-wear designs [and] Ditte does a fantastic job in designing strong trend-led pieces available at very competitive price points.”

Laura Brown, editor-in-chief of the American edition of InStyle, was an early Stateside supporter and provided a major boost to the brand. “I first noticed Ganni three years ago when they sent me a lovely brown sweater with LB monogrammed on the cuff,” she remembers. “I Googled them and found Nadja Bender in their show and the coolest, individual pieces that were so reasonably priced.” Brown’s favourite piece is the leopard print cotton coat. “Julianne Moore complimented me on mine a while ago, and now she has one too,” Brown says.

For buyers, the large volume of pieces that Ganni produces means that stockists can differentiate themselves from each other. “The collection itself has enough breadth for buyers to create their own edit, without losing their own brand identity,” says Tiffany Hsu, buying manager of MyTheresa, which is launching a varsity-themed capsule collection from Ganni in October; Net-a-Porter launched a floral-themed Ganni capsule in May.

Nikolaj says Ganni is run with the “cultural mind-set” of a tech company and that there is no strict business plan, although that may be an exaggeration. “We just have this idea of where we want to take the brand,” he says. “We use a lot of tech methodologies or tools or concepts like ‘scrums’ and ‘sprints’ and we try to test small and fail fast and all those clichés.”

So far, Scandinavia accounts for 45 percent of Ganni’s sales; the UK comes second followed by the US. “It’s a very important step for me to be able to say that we derive most of our business outside of Scandinavia,” says Nikolaj, who adds that growing international sales is the brand’s top priority. “We're seeing the most visitors on social media and on our website from the US, so we've been working with a distributor and the market is doing so well that we are setting up a small office [in] New York.”

“We're kind of at a tipping point now where we need to start prioritising and be less ad hoc in our approach to how we apply our resources.”