LONDON, United Kingdom — After a two-year wait, this month Kering will finally launch its first Gucci eyewear collection to be produced in-house, following the French conglomerate's decision to terminate its licensing agreement with Safilo and bring the brand's eyewear business back into the group.

Previously, Kering brands’ eyewear collections were created through licensing agreements with external companies. But now eyewear for Gucci, along with Yves Saint Laurent, Alexander McQueen and Stella McCartney, will be produced in-house by Kering Eyewear, an internal venture that was formed to design and distribute eyewear for the group’s luxury brands. Safilo, will however still manage the manufacturing, production and supply of Gucci eyewear until 2020.

“Eyewear represents a key category through which to express the new aesthetic [of creative director Alessandro Michele]. Together with Kering Eyewear, we are now enthusiastically committed to achieving the category’s full potential, starting with this collection," said Gucci chief executive officer Marco Bizzari in a statement.

Kering Eyewear’s aim is to disrupt the market and, to do this, it is attempting to operate more like a start-up than a traditional luxury company, by responding faster to market needs, investing in research and adapting its business practices to make the most of new opportunities.

The company is overseen by Roberto Vedovotto, former chief executive officer of Safilo, who joined Kering two years ago. According to Vedovotto, running Kering Eyewear like a start-up within the conglomerate will help achieve his aim to make it the world leader in high-end eyewear. “We have been given the freedom of trying to change the eyewear industry, in a solid and powerful framework,” Vedovotto told BoF in an interview at the company’s sleek London showroom.

Being a new company allows us to be flexible and dynamic in responding to market needs, to exploit new opportunities [and] invest in innovation.

In the space of two years, Vedovotto has grown the Kering Eyewear team from four to 340 people and launched 11 eyewear collections to date. He expects the headcount to increase to 480 employees by the end of this year.

Kering Eyewear works closely with the rest of the group, but remains independent from each fashion house. “Being a new company … allows us to be flexible and dynamic in responding to market needs, to exploit new opportunities, invest in innovation and research and development and to be focused on the specific needs of different channels,” Vedovotto says.

With the global eyewear market, which includes frames, contact lenses and sunglasses, expected to reach $140 billion by 2020, the opportunity for one of the world’s largest luxury groups is vast. But it also comes with a hefty price. In order to bring eyewear in-house, Kering paid Safilo €90 million ($100 million) to terminate its license agreement two years earlier than expected, and sacrificed around €50 million ($56 million) in royalty income. According to Luca Solca, head of luxury goods at Exane BNP Paribas, this will weigh on the company’s profit and loss margins for a number of years. 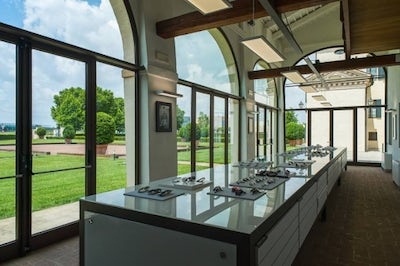 “I have reservations on luxury goods companies building their independent eyewear businesses,” says Solca. “The evidence so far points to significant difficulties —Italian brands which have attempted this in the past like Prada or Tod’s have had to U-turn.”

Indeed, operating a start-up-like organisation within a larger business has proved risky for some companies. Nordstrom launched an innovation lab in 2010 with much fanfare, only for the businesses to be scaled back significantly earlier this year.

“A lot of fashion brands have tried to do it,” says Darius Pocha, co-founder of Joylab, whose consultancy advises and works with other companies to build innovation labs within their businesses.

“Some brands have set up innovation labs and they tend not to have worked because what they have done is thrown a chunk of money at bringing a bunch of people together to kind of do their innovation thinking for them,” says Pocha. “[But these] have not integrated enough into the business to actually deliver.”

But that isn’t stopping others from trying. Two years ago, Ann Inc, the parent company of the Ann Taylor and Loft clothing brands, launched Lou & Grey, a new brand which it says its operates in a different way to its other labels.

“It was important for this very small team at Lou & Grey, to be very collaborative, to be very fast thinking, quick paced, to be able to make decisions very quickly,” Austyn Zung, executive creative director at Ann Inc, tells BoF.

There can be that freedom to just really react on a whim to a design idea that you are having and just make it happen.

“Because it is this new burgeoning business, there is not as much pressure as the other brands have, so there can be that freedom to just really react on a whim to a design idea that you are having and just make it happen and get it into the stores quickly and test that and see how our client reacts to it,” she adds. Lou & Grey recently opened a concept store in New York, though Zung declined to disclose financial figures on its performance.

Faced with the rise of e-commerce and the need to innovate in order to remain relevant to today’s consumers, department stores, too, are investing in innovation. British department store chain John Lewis has its own start-up accelerator, aimed at developing rapidly growing retail companies. Likewise, US department store Macy’s has operated an Ideas Lab for two years and Sears launched its Integrated Retail lab four years ago.

However, it remains to be seen whether innovation labs and or start-up companies within larger groups can succeed in the long term.

“The people who do it brilliantly well are very few and far between,” says Pocha. “Fashion brands have been traditionally behind the curve anyway and I think they are really struggling to get it.”

Vedovotto remains bullish about the approach at Kering. “We have a simple and lean structure and thanks to [Kering] we are able to maximise synergies within the group,” he says.

“In 2014, we had 10 active brands with a value of €350 million ($393 million). We have a balanced mix of global brands and newcomers with high potential that allows us to differentiate the offer,” he says. “Our mission is to make eyewear a core category.”

Editor’s Note: This article was revised on 4th October, 2016 to clarify Safilo will handle the production of Gucci eyewear until 2020.