NEW YORK, United States — Streetwear sites like Highsnobiety and Hypebeast used to focus on the latest Supreme drops. Now, they work with luxury brands like Louis Vuitton, Dior and Gucci.

Last November, Gucci partnered with Highsnobiety on a shoppable lookbook promoting its graffiti inspired Cruise 2017 collection, created in collaboration with former snowboarder and artist Trevor Andrew, aka GucciGhost. Within the first days of the campaign, the lookbook images, featuring a group of New York skaters, generated over 1 million impressions and drove 2,700 clicks to Gucci's e-commerce site within its first week, according to Highsnobiety.

Highsnobiety currently attracts about 9 million unique visitors per month. Hypebeast also has about 9 million. But both began as simple streetwear blogs. “It was at a time that there wasn't a lot of choice for someone interested in a creative discipline in fashion outside of fashion design. There was no fit for me in terms of courses offered in Europe,” explains Swiss business student-turned-blogger David Fischer, who in 2005 founded Highsnobiety during his last semester at university. “From the first day, it's always been a website about product, sneaker culture and streetwear. Those were the things I loved.”

That same year, Kevin Ma, a Hong Kong-born student and sneaker enthusiast living in Vancouver, Canada, launched the footwear blog Hypebeast as a side project. “I was collecting sneakers, lining up for them, visiting sneaker forums like Nike Talk to find information about it, but at the time information was very dispersed, so I decided to start documenting my findings,” recalls Ma.

For years, luxury brands kept their distance, even as the sites began to expand their beats and grow their audiences. “People pigeonholed us as a streetwear blog and told us to stay in our lane, but for us our lane was always wide,” says Ma. "We always wanted streetwear and high fashion to be together, we didn't want to differentiate it,"

Fischer agrees: “It was a strange relationship between perception versus reality. We were still being perceived as a niche [website] but 500 million impressions a month is not a niche.”

We were still being perceived as a niche website, but 500 million impressions a month is not a niche.

But as Hypebeast and Highsnobiety began to scale, the gap between high fashion and streetwear also began to close, culminating in the birth of street-luxe labels like Vetements. The shift began in earnest back in 2006 with the rise of Shayne Oliver’s Hood By Air and could be seen in Riccardo Tisci's streetwear-inspired work for Givenchy. By 2012, everybody from Nicolas Ghesquière at Balenciaga to Alexander Wang had referenced streetwear in some form or another. The same year, Ma featured Dior Homme artistic director Kris Van Assche on the cover of Hypebeast’s inaugural print issue, which explored the synthesis of high and low culture.

Some readers were confused. But luxury labels soon started paying attention, as they slowly recognised not only the rise of streetwear, but the growing influence that streetwear sites like Highsnobiety and Hypebeast had on millennials, one of the largest generations in history about to enter their peak purchasing years. Indeed, Bain expects millennials to boost the value of the personal luxury goods market to €290 billion ($324 billion) over the next three years, with the generation accounting for 45 percent of sales by 2025.

“I think we reached a critical point at the end of the first decade of this century, where brands really started to realise the reach of these publications and the trust their fan bases have,” says Brian Trunzo, senior menswear editor at trend forecasting agency WGSN. 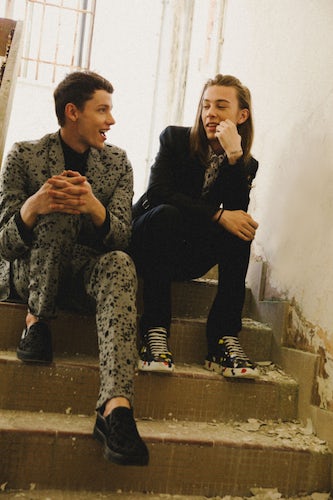 At the same time, the media landscape changed dramatically, compelling brands to shift their marketing spend away from traditional advertising towards sponsored content, something that Hypebeast and Highsnobiety were poised to exploit.

“The ecosystems have changed, particularly where the much-discussed millennials are engaging with fashion, style and culture. For a luxury brand, it's very important to understand how that dynamic is changing as our engagement with the millennial segment is growing quite dramatically,” says Robert Triefus, chief marketing officer at Gucci, who, in the past three seasons, has worked extensively with both Hypebeast and Highsnobiety. “I think that the relationship with the likes of Hypebeast and Highsnobiety is all part of the motion of the changing ecosystem and changing way of engaging by creating content and narratives.”

Jennifer Sey, chief marketing officer of Levi's, which also works with both publications, adds: “What comes from us directly is advertising and the consumer is sceptical of traditional advertising. When it comes from these sites it’s an automatic endorsement.”

“[Luxury and streetwear] are moving closer to one another and I guess we've managed to build a certain authority and stability as a media brand to bridge the gap between those developing movements and mainstream media,” says Fischer. “That combination of being able to package something in a way that we're speaking to this important opinion-leading audience but at the same time doing so at a global scale — that matters.”

In February, both Highsnobiety and Hypebeast launched in-house creative agencies — Highsnobiety+ and Hypemaker, respectively — to capitalise on growing demand for brand partnerships. “Clients understand the second they want to reach a global influential audience, they need to be speaking to a partner like us,” says Fischer.

“There's no questions that this type of content is proving to be engaging and ultimately is delivering a result,” adds Triefus. “It doesn't mean to say that the old partners and systems aren't relevant, it just means that you adapt your ecosystem and deploy your content in a more comprehensive way.”