After seven years making prototype garments for the likes of Céline and Balenciaga, Daniel Pallas and his wife Véronique decided to launch their own line, which now generates about 50 percent of the company’s total turnover.

PARIS, France — In 1991, Daniel Pallas took over his father’s business, a Paris atelier founded in 1970 and named after the family surname. Fifteen years later, Daniel and his wife Véronique launched a service making prototype garments for luxury fashion houses, attracting clients like Céline and Nicolas Ghesquière’s Balenciaga. But in late 2012, the couple had a moment of realisation.

“The trigger moment happened one day, when one of my workers brought me a piece that was for Balenciaga,” recalls Daniel Pallas. “I looked at it and, God, I was amazed by the technique and the beauty of it. I went to Véronique and told her that if they were capable of producing this kind of work for Balenciaga, then they could do it for us.”

In January 2013, the couple launched Pallas, a women’s tuxedo line crafted by hand in the company’s original atelier. Today, Pallas has twenty points of sale (including Net-a-Porter, Barneys, Harrods and Le Bon Marché) and, in 2014, generated a total turnover of €760,000, divided equally between the new label and the existing prototype business, according to the company.

We would make these beautiful clothes and they were only appearing in the shows and in magazines spreads. In stores, it was a completely different version.

The Pallases met in 1984 and began working together twenty years later, when Véronique left her job teaching pattern-making at Paris fashion school ESMOD to join the atelier. But after seven years in business, the couple were having doubts. “There was a general sense of frustration because, as much as we loved it, we were only asked to make prototypes for fashion brands,” explains Véronique. “They would never give us the production, even though we could have been capable of doing it on small lines or capsules. We would make these beautiful clothes and they were only appearing in the shows and in magazines spreads. In stores, it was a completely different version.”

The couple also recognised the need to reinvigorate the traditional atelier with a new revenue stream and a means of generating more work for its artisans. When Daniel’s father first set up the company, he also launched an eponymous line of beautifully tailored women’s ready-to-wear. The original David Pallas label proved popular in Asia, where brands such as Japanese label Hanae Mori would buy complete garments and simply stitch in their own tags. But by the time Daniel and Véronique took the helm, demand for the line was beginning to slow. “Let’s be honest, it was mainly aimed at old women. We realised at some point that something had to change because, well, our clients were going to die pretty soon,” says Véronique, half-joking.

They realised that if they kept design and production in-house, produced in small quantities and avoided expenses like fashion shows, they could deliver luxury product at very competitive rates compared to bigger brands.

However, the couple had no idea how to actually build an independent fashion brand from the ground up. Daniel and Véronique understood their product — “Tuxedos are the chicest outfit a women can wear, if you ask me,” says Daniel — and had an atelier with the technical skills to make it, but they were used to dealing with designers, production managers and artisans; not editors, sales agents and PRs. Then, months into making their first collection for Pallas, the couple met the Paris-based PR David Giroire.

Giroire, whose eponymous firm represents French brands including ready-to-wear labels Raphaëlla Riboud and Irié, jeweller Solange Azagury-Partridge, and Perrin Paris, a luxury leather accessory house, immediately took them under his wing. Giroire introduced the couple to key people: a graphic designer to work on the logo; Perséphone Kessanidis, co-founder of the sales agency Agence M&K; and Belgian model Hannelore Knuts, who had worked on collections with Azzedine Alaïa and Haider Ackermann. 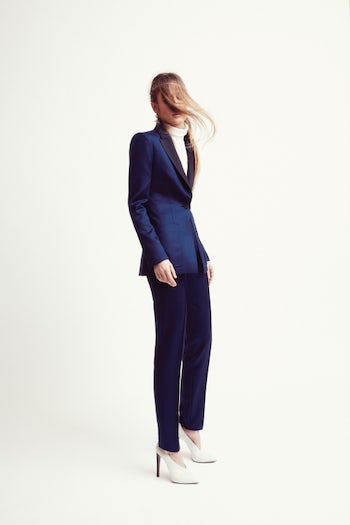 Knuts, who had some design experience from a stint at Belgian leather house Delvaux, became a creative consultant for Pallas. Indeed, the brand has continued this spirit of collaboration, working with Violeta Sanchez, Yves Saint Laurent and Helmut Newton’s muse, on its autumn/winter 2014 collection and teaming up with Balenciaga designer Allegria Torassa and stylist Niki Pauls, co-founders of the Cicciolina Paris parties, for spring/summer 2015. “They’re just friends who bring us the fresh eye we need and the modernity,”says Daniel.

Pallas’s first collection of sharp tuxedos, made in satin-trimmed crepe or grosgrain and featuring silk lapels, showcased the label’s tailoring and pattern-making expertise, offering a modern, more delicate version of Yves Saint Laurent’s infamous le smoking styles. Since then, the brand has expanded beyond the tuxedo and into pencil skirts and coats, maintaining the sleek, tailored aesthetic that initially clicked with editors and buyers and adding occasional splashes of colour to its mostly monochrome offering. The latest collection features stand-out hot pink pieces.

To this day, Pallas makes everything in-house, in its Paris atelier. When the patterns for the collection are ready, workers come to the atelier to pick up the fabrics and drawings. They work at home, then return to the atelier to drop off their work and have it inspected. On average, one tuxedo takes a whole day of work. “The worker who does the prototype also handles the production for the whole series, that way the clothes sold are even better than the prototype, because the person is already trained on them,” says Véronique.

Proenza Schouler is the latest label to join the prototype side of the Pallas business. “Working for others brings fresh air. It’s always interesting to satisfy the needs of a designer coming from another universe. It’s a challenge, it keeps you going!” says Véronique.

Pallas employs about ten workers, aged between 50 and 70 years old, and currently produces 800 to 1,000 pieces per season. “We want to keep the number of points of sale under control because of our production capacities,” explains Daniel, who says that the label would be able to double its current orders without changing the way it produces the garments. Eventually, however, the brand may need to find a way to scale.

“The goal is simple: to not change,” he says. “But if we grow, maybe we will keep only the tuxedos in this atelier and have ready-to-wear pieces done externally. But the day that some pieces no longer come from this atelier, we will say it.”

“With hindsight, I realise that, unconsciously and step by step, I shut down most of the things my father was doing here,” says Daniel. “I repainted his entire office white, I stopped the activities of his own line and I took his first name out of the new brand’s name. But it was the right thing to do.”