Key to Self-Portrait’s growth was Chong’s early recognition of influencer culture at a time when “Instagram brand” was a term yet to be coined. He started the label with a 17-piece collection of lace dresses, tops and skirts, a website and a handful of orders from online platforms Shopbop, Revolve and Asos. The rest of his starting fund was funnelled into hiring PR and marketing agencies in Los Angeles and London for celebrity and influencer seeding and brand awareness.

That strategy paid off. Months after launch, Jennifer Lopez wore Self-Portrait’s £159 tuxedo wrap dress on American Idol. Influencers like Aimee Song were also early adopters, and Michelle Obama wore custom-made Self-Portrait in 2016 during her “Let Girls Learn” tour. Each were “pivotal moments” for brand awareness, according to Chong. 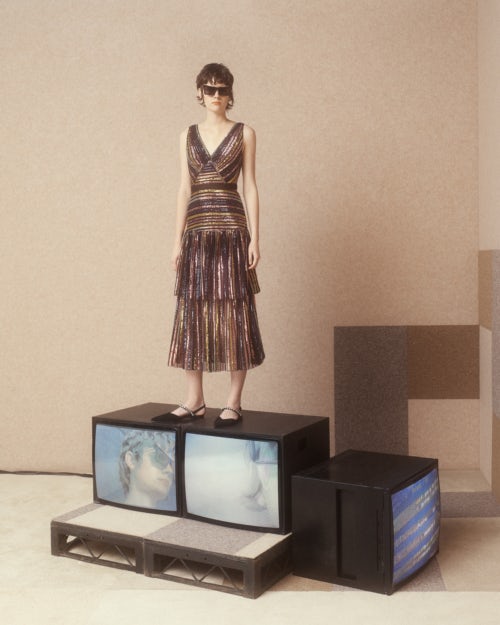 “I had a PR agency even before I launched to make sure the timing was perfect. I had nine months to make a profit,” he told BoF from his office in London’s Hoxton neighbourhood. Starting with just one intern and two freelancers in 2013, the Self-Portrait team now stands at 40 in London, five in Hong Kong and four in China to oversee production and quality.

Chong sees value in generating genuine rapport with clients, and he still runs the Self-Portrait Instagram account to stay close to its 870,000 followers for customer feedback. “We all live in a social media world and that direct communication and contact is better and more efficient than any advertising,” he said.

In 2018, Chong opened Self-Portrait’s first store on Albemarle Street, a stone’s throw from Bond Street in London’s Mayfair and neighbouring luxury labels like Aquazzura and Thom Browne. Chong can occasionally be found on the shop floor talking to customers.

Landlord Matt Farrell of Trophaeum asset management says mixing niche, contemporary brands on the luxury street works for fashion-conscious shoppers who are as likely to spend thousands on a Dolce & Gabbana dress as a lower priced Self-Portrait top. Chong’s “strong, creative and savvy business has proved to be a killer combination,” Farrell said.

Taking time to foster relationships and focus the brand’s attention on a specific product category — the feminine lace party dress — has been key to Self-Portrait’s success.

“Since the beginning, because it’s a very crowded market and every brand has their own strengths, you can’t have it all. The first few years is building the brand aesthetics,” Chong said. Self-Portrait has since added swimwear, accessories and shoes to its offering, but its core channel is still occasionwear.

Chong began his design career at a British high street chain in 2007 after graduating from Central Saint Martins' BA programme. The period was formative to growing his business acumen and understanding of market sensitivities, particularly the shift in importance of colour, fit and design on high- and low-volume sales.

In 2011, Chong co-founded contemporary label Three Floor with Yvonne Hoang but exited after two years. “I found myself compromising a lot of thoughts and ideas, so I decided to go my own way,” he told BoF in a previous interview.

Three months later, he started Self-Portrait having spotted a niche in the contemporary market. By keeping prices low and distribution limited to luxury department stores and e-tailers, he was one of the first to offer partywear at an accessible price that also matched the design standards and garment finish of luxury brands.

“[Self-Portrait’s first] collection filled a gap in the market – a destination brand for something unusual to wear to special events at a sweet-spot price point,” says Poppy Lomax, womenswear buying manager at Selfridges. The popular London department store was the brand’s first major stockist, and it continues to be one of Selfridges’ best performing contemporary womenswear labels.

Self-Portrait really was the first brand to build its business around a single product.

“Self-Portrait really was the first brand to build its business around a single product, and the label’s unprecedented success has changed the landscape of contemporary womenswear,” Lomax added.

E-commerce platform Net-A-Porter soon followed, with eight pieces from the collection, which sold out in hours. “I was so excited. Net-a-Porter [had] never gone below £600 or £700 (for a dress) so I was the very first contemporary label on their platform,” Chong said. MatchesFashion came next. Today, Self-Portrait has 375 stockists globally, including Saks and Lane Crawford.

Self-Portrait manufactures its collections in China to keep prices low, and Chong said the technology and adaptivity of manufacturers in the country allows him to maintain high quality while also providing the speed to market he requires in today’s Instagram age. Best-selling items can be back in stores in three weeks, he added. 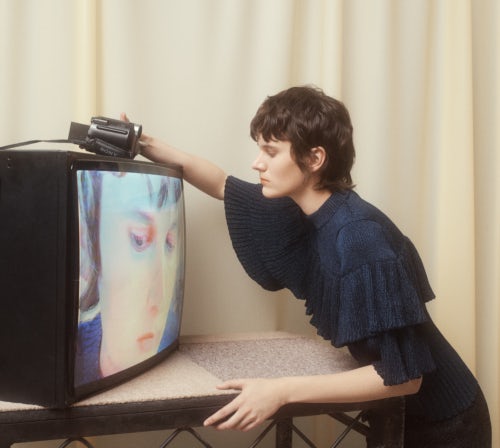 The brand currently gets 12 percent of its sales from the region, with the UK, Europe and the Americas at 22, 23 and 24 percent respectively. A joint venture with Shenzhen Ellassay, who also owns Iro and Vivienne Tam, includes bullish plans for six stores next year (two in Beijing, two in Shanghai, one in Chengdu and one in Shenzhen). The aim is to reach 50 stores in China in the next five years, with sales forecast at £61 million. There is also a new Japanese distributor and plans for outlets in Taiwan, Singapore and Korea.

Chong has adopted local partners in part to avoid the types of cultural missteps that some luxury brands have fallen foul of in recent times. He has also been closely involved in the store fittings and product offerings, making each slightly different to cater to the market, while staying true to the brand’s DNA.

“Every territory’s lifestyle is different. The way they shop, the service level is so high in China [for example]. It’s arrogant to assume we can repeat [what we do elsewhere] there. It’s so important to localise and have the expertise to translate to local culture.”

To date, Self-Portrait hasn’t taken outside investment, hiring expertise along the way and finding partners in new territories.

“I always think I need the brand to have longevity,” says Chong. “I don’t want to be too trendy or oversaturated because that’s not sustainable for a brand.”