NEW YORK, United States — During the Autumn/Winter 2017 shows in February, a wave of editors, buyers and influencers, wearing Canada Goose 'Chateau' parkas, quilted shell-down Moncler 'Armoise' jackets and Yves Salomon's fur-lined army coats, flooded the icy streets of New York. Along with popular models from the likes of Balenciaga, Gucci and Marques’Almeida, the sea of fancy parkas — more than just protection from the cold — was evidence that luxury outerwear was becoming a new signifier of status.

“I don't think you can ignore the conspicuous consumption side of what's happening here. There's a little bit of showing off to it. When you're wearing a Canada Goose jacket, people know you spent hundreds of dollars,” says Matt Powell, an analyst at NPD. “Outerwear could be the next ‘it’ bag.”

“Outerwear is definitely becoming more prolific. Women want versatility and multiple options,” adds Lisa Aiken, retail fashion director at Net-a-Porter. “There were times that you could put your outfit together and throw on a coat. Now, people realise the value of a statement piece given the amount you wear those jackets, whether you're going somewhere smart or to the grocery store.”

Retailers have taken notice, increasing their investments in the category. Net-a-Porter, MatchesFashion and Nordstrom, for example, have all grown their outerwear buys in the last three seasons. “We have increased the category by 105 percent versus last year,” says Aiken. MatchesFashion's womenswear buying director Natalie Kingham says the size of the company’s Autumn/Winter 2017 luxury outerwear buy — composed of brands including Balenciaga, Joseph and Calvin Klein — has grown by triple digits year-on-year. 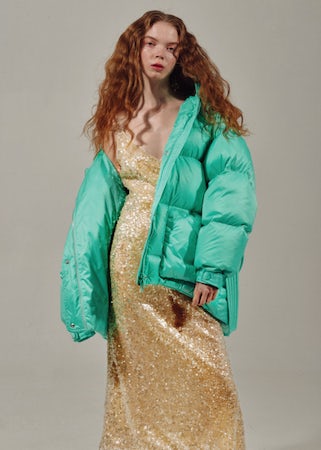 “There is a clear need in the market for products, which are more comfortable and more intelligent without foregoing the need to maintain style and fashion,” says Andrea Bucalossi, managing director of Italian luxury outerwear label Mr and Mrs Italy, known for tis military-inspired parkas. Between 2015 and 2016, the company's revenue grew 250 percent to €37 million (about $40.5 million) and it now sells in over 30 countries at globally influential stockists including Barneys, MatchesFashion and Lane Crawford.

According to Euromonitor, the global luxury outerwear market hit $11 billion last year, up from $8.75 billion in 2011. This figure includes a wide spectrum of sub-categories ranging from puffer jackets, heavy shearlings and technical performance outerwear to lightweight bombers, denim jackets and trench coats.

A new wave of emerging labels, including Off-White, Saks Potts and Awake, are also capitalising on the momentum. “There's definitely more growth from niche outerwear brands and what's interesting is that we're [now] seeing more brands like these specialising in just outerwear,” says Aiken.

“We focus on brand identity and gaps in the market that traditionally luxury from a previous generation have not yet adapted to,” explains Off-White founder and creative director Virgil Abloh, whose streetwear-inspired luxury label's selection of distinctive outerwear now ranges from vintage embroidered denim jackets for $995 to leather trench coats for $3,585.

Kiev-based outerwear label Ienki Ienki is also carving out a space in the market. In its first season, the brand's one-of-a-kind colourful goose-down puffer jackets (about $1,080 to $1,425) have been picked up by over 80 stockists including Barneys, Le Bon Marche and Boon the SHOP. “I wanted to come with an alternative product that was fun and easy,” says Ienki Ienki founder Dmitriy Ievkeno. In June, Ievkeno, who also owns popular Ukraine multi-brand store Ashtik, plans to expand Ienki Ienki with a men's line.

Meanwhile, heritage brands like Canada Goose, Moncler and Yves Salomon are seeking to capitalise on the momentum by expanding beyond heavy outerwear into more fashion-forward lighter-weight models. “We continue to expand and enhance our core product offering, while remaining true to our origins and heritage. The demand for us to be a three-season brand continues to grow, so Spring has been a large focus for us," says Dani Reiss, president and chief executive officer of Canada Goose.

The outdoor specialist, which IPO'ed in March, has seen revenue grow by 35 percent at compound annual growth rate over the past three years, which allowed the company to quickly expand their business. It launched e-commerce in Canada and the US in 2014 and 2015 respectively, expanded to France and UK in 2016, and opened their first-ever flagship stores in Toronto and New York that same year. "Of course people want their jackets to perform, but they now also think about it as part of their wardrobe and want different silhouettes, colours and prints for their individual style,” adds Reiss.

Like Canada Goose, Mr & Mrs Italy has also found new levers of growth in its Spring/Summer offering, which today accounts for 20 percent of the total sales with bombers and trench coats in specific representing 10 percent of the company's overall sales. "We continue to invest in innovation by introducing new coats, which has been very successful," says Bucalossi.

“That this category may become as important as handbags I disagree with. [The handbag market], has become gigantic as they are perfect to convey and communicate status. Outerwear is not like that,” says Luca Solca, head of luxury goods at BNP Exane Paribas.

While the notion of luxury outerwear becoming as important and big as handbags is extremely unlikely [by 2020, the global luxury outerwear market will have grown a yearly average of 2.1 percent since 2016, compared to 2.7 for the global luxury bag market], some, like Matt Powell, see the segment having potential to become the next it-category: "As long as brands can keep outerwear fresh and new, we can expect to see growth in the future. Brands that keep trotting out the old tired styles are in jeopardy."