LONDON, United Kingdom — One morning in early July, 50-odd streetwear aficionados woke up after a night of camping outside Ssense’s new Montreal flagship to see that 250 more people had joined the line behind them.

They were there to buy limited edition T-shirts, customised Nike sneakers and signed posters by streetwear messiah Virgil Abloh — as well as document the experience on Instagram and commune with other members of the tribe that has formed around the Off-White founder and newly appointed artistic director of Louis Vuitton’s menswear.

The event, which took place in a detailed recreation of Abloh’s home studio, was Ssense’s latest "drop" — increasingly common lingo for a controlled release of limited edition product, often on a weekly or monthly rhythm, that’s far faster than the traditional fashion cycle and designed to drive consumer excitement with a constant stream of newness.

The concept of regularly drip-feeding product in limited quantities was pioneered in Japan by the likes of Hiroshi Fujiwara and popularised by streetwear brands like Supreme, Palace and Nike, which have adopted the system at retail and online.

“It’s about how many times you can hit them with new ideas,” says Bobby Hundreds, co-founder of Californian streetwear label The Hundreds, which drops product weekly and has seen traffic to its website increase by as much as 29 times on drop days.

Now, European luxury houses like Moncler, Fendi, Gucci, Burberry and Balenciaga are embracing the model to better connect with Gen-Z and Millennial consumers, who are set to drive 45 percent of luxury spending by 2025 and expect newness at the speed of Instagram.

According to market sources, Hedi Slimane’s Céline will also adopt drop-style product releases starting this autumn. It is also highly likely that Abloh will make limited-edition product drops part of his strategy at Louis Vuitton.

“I expect more brands will be forced to follow this approach. They will have to adapt or fade,” says Luca Solca, head of luxury goods at Exane BNP Paribas, who has written about the “Newness Imperative” facing luxury houses as virgin markets evaporate and brands have to work harder to attract established consumers with innovative product.

Moncler has made the most robust push.

Starting in February, the Italian brand replaced its seasonal partnerships with Thom Browne and Giambattista Valli on its Gamme Blue and Gamme Rouge runway lines with monthly drops of product created in collaboration with Valentino’s Pierpaolo Piccioli, Hiroshi Fujiwara, Craig Green, Simone Rocha and others. The company calls the approach its Genius Project.

“It’s a totally different approach,” says Moncler chief executive, Remo Ruffini. “If you want to stay in-tune with different generations, I feel it’s the only way, because you need an approach that makes you top of mind of the customer every day.”

More brands will be forced to follow this approach. They will have to adapt or fade.

At Burberry, chief creative officer Riccardo Tisci is working on a series of limited edition pieces. The first batch is set to drop with his debut runway show for the British megabrand in September. A collaboration with Vivienne Westwood will drop in December.

For Burberry, the adoption of drop-style product releases is a shift away from the traditional “see now, buy now” approach, which the brand embraced in 2016, and comes as chief executive Marco Gobbetti’s is trying to upscale and re-energise the brand.

“We have evolved our delivery cycle to make it more fluid and creatively led,” says Gobbetti. “By introducing a regular flow of edited collections, unexpected collaborations and instantly available product capsules, we’ll inspire and excite customers throughout the year.”

But operationalising drops isn’t just a matter of speeding up existing processes. “When you start doing these initiatives your complete value chain has to change," explains Antonio Achille, global head of luxury at consulting firm McKinsey & Company.

“We changed almost everything inside the company, from the organisational ideas to the logistics,” says Ruffini. “But the biggest change has been the internal culture. You can change the culture, but, for a company which started working with a seasonal pace in 1952, it takes time for people in your company to feel confident, so we’re taking it step by step.” 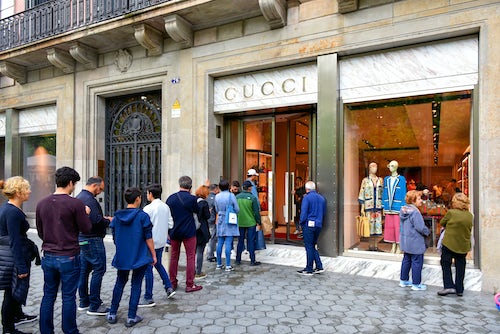 Line outside of Gucci store in Spain | Source: Shutterstock

For design teams at luxury houses, adopting the drop system means constantly creating product that is simultaneously new and yet true to their carefully cultivated brands. What’s more, the business of luxury goods is ultimately the business of cultural meaning. A luxury good has value, not simply because of its unique design or superior construction, but because society’s tastemakers say it has value. The question becomes: how long does it take for cultural value to condense around a new product? And can this happen the instant an item drops on shop floors and websites?

Of course, strong brands can imbue products with a degree of cultural value straight out of the box. But, even when Balenciaga presented its chunky dad-style Triple S sneakers on the runway in January 2017, it took almost a year for the shoes to catch on with the wider fashion crowd and become a significant driver of sales for the house.

Implementing drops also has implications on the communications strategy of brands. If part of the draw of drops is the experiential value of attending an event and communing with fellow fans of a brand, traditional push marketing may not be the most effective way to drive engagement, according to Leila Fataar, founder of Platform13, a consulting firm which counts Adidas and Under Armour as clients. Rather, brands must cultivate relationships with key members of their communities.

But for a luxury house, creating the kind of communal spirit that exists around the world's most powerful streetwear labels remains a major challenge. “Just because it works for streetwear, doesn’t mean it will work for everybody else,” cautions Hundreds on the approach.

There are also challenges along the supply chain. Even for a company like Supreme, whose T-shirts, hoodies and hats are easier to design and produce than luxury goods, the drop model comes with huge complexity. It’s part of the reason why the company first took on private-equity funding back in 2014. Moncler, for its part, has already increased investment in partner facilities in Italy and Romania in order to speed up production.

Thus far, luxury drops have been more about generating marketing heat with a thin layer of product than selling in large volumes. Ruffini admits Moncler’s drops currently account for only a small fraction of total sales, though the overall impact appears to be positive.

Just because it works for streetwear, doesn’t mean it will work for everybody else.

According to Tribe Dynamics, Moncler garnered $1.1 million in earned media value (EMV) in June following the first drop of Hiroshi Fujiwara's Genius Project collection for the brand, up 43 percent on the previous month. In the first half of 2018, revenue was up 27 percent year-on-year, reaching €494 million, which Moncler attributed, in part, to its Genius Project.

Now, Ruffini is planning to extend the approach to Moncler’s main line. “We’re learning how to develop everything, because the next step is to also make the main collection, which is 85 to 90 percent of our business, operate on a monthly basis,” he reveals.

But not everyone is as bullish on the model.

“Of course, creating marketing attention is valuable, but if they don’t have a supply chain capability to be more agile, I don’t see what the upside is,” argues John Thorbeck, chairman of supply chain analytics firm Chainge Capital.

For Thorbeck, the shift to delivering product in weekly or monthly drops is powerful, not only for its marketing value, but because, with the right supply chain investments, it allows companies to be more responsive to market signals and better align supply and demand, thereby reducing the biggest single cost for fashion companies: unsold inventory.

“These brands are flowing goods and presenting the image of newness rather than creating real responsiveness,” he says.

Indeed, there’s little point creating new product at the speed of Instagram if it’s not the product consumers want to buy.

What Fashion Can Learn From Supreme-Style Product Drops?