NEW YORK, United States — The industry is down on New York Fashion Week this season, with more designers than ever skipping out or rethinking how to present their collections.

Designer Catherine Holstein feels differently. In fact, she thinks New York is the most exciting place to be showing her latest collection for Khaite.

“[New York] is up for grabs and for the first time, it’s super democratic,” said the designer, who launched the womenswear label with the backing of Adam Pritzker’s Assembled Brands in 2016 and presents her third runway on Tuesday. “There has definitely been a shift in who led and who will lead now.”

Holstein is on track to become one of those leaders. In just five years, she’s built a business that spans ready-to-wear, footwear and accessories by relying on a mix of traditional and modern tactics. She’s gaining traction in a competitive, fragmented market that breaks independent designers more often than it makes them.

Khaite has an unusually balanced approach. It has earned cred through relationships with industry insiders like Vanessa Traina and by selling to premium retailers like Bergdorf Goodman, Harvey Nichols and others. But Khaite is also focused on building its business with customers directly through its e-commerce site, where shoppers can pre-order items right after its runway shows, and which the brand projects will represent 30 percent of sales in 2020.

The mix is working. Khaite’s runway debut last February — during which models walked around a giant tree of golden leaves — ended up being a breakout of the season and one of the top 10 most viewed shows from New York on Vogue.com.

The pressure was on for her follow up in September, which was aided by an unforeseen marketing boost. A few days before the show, a paparazzi image of actress Katie Holmes wearing Khaite’s cashmere bra and sweater combo went viral online and the pieces sold out.

While an engaging social media feed is nothing new in fashion, Khaite came along at the right moment — just before Phoebe Philo exited from Celine and as Gucci’s maximalist approach was at its height — when there was an opening in the market for a pared down, luxury take on everyday staples like sweaters and jeans. 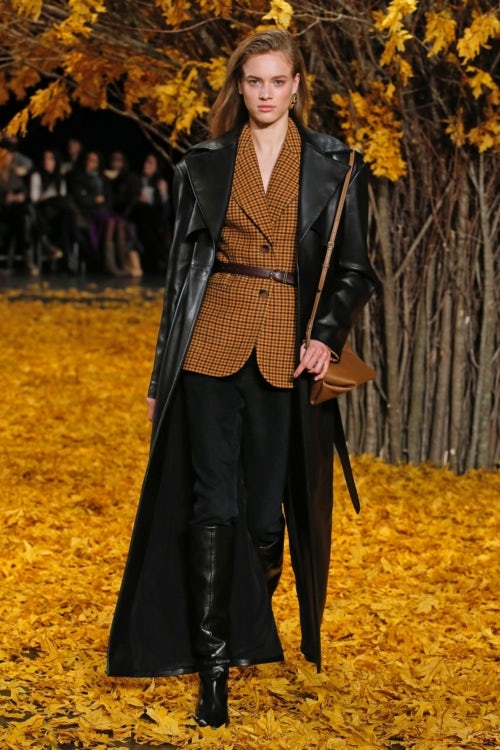 So before Holstein launched Khaite, when she was just posting inspirational images to the brand’s then-new Instagram account (featuring the photographs of Francesca Woodman and stills from Stanley Kubrick’s "2001: A Space Odyssey"), her vision struck a chord. Net-a-Porter and MatchesFashion reached out before she had even shared any images of her designs.

It helps that Holstein wasn’t a newcomer to the volatile fashion business. She launched her namesake line right out of fashion school in 2006 to critical success, selling her first collection at Barneys New York. But she closed it after the 2008 recession and went to work for a range of brands, including Vera Wang and J.Crew.

This time around, Holstein doesn’t have to rely completely on magazines or retailers to “tell our story,” she said. “We have an opportunity here to really control our message.” However, with that control comes more responsibility.

“Before, if you were a young designer, you just had to be...a young designer,” she said. “Now you have to really be willing...to think about a brand in a full 360-degree way in the way that Prada or Gucci does. That requires a lot more capital.” (Pritzer is still the majority shareholder of Khaite, and Stelac Capital Partners bought a minority stake in 2019.)

Competing with Europe’s big players also requires a shrewd approach to visual imagery. Khaite typically shoots one editorial per month to help feed the Instagram account, which Holstein still describes as “organic” and not scheduled, and started doubling that output this year.

For its own imagery, Khaite prioritises casting interesting models and evoking a strong emotion that matches the brand’s wistful, cosmopolitan sensibility. A video created to advertise Khaite’s handbags in August did not make the accessories the only focus. Instead, it was more about the connection between the two people walking around Washington Square Park on a cloudy day.

“[Director André Turpin] kept turning to me and saying, ‘Do we have the bag?’” said Holstein. “We are really capturing a feeling here, I don’t even care if the bag’s in the movie.”

Then there’s unpredictable social media moments, like Holmes’ sighting in Khaite last autumn. The internet delighted in the celebrity’s confident approach to the unconventional item, which Holmes purchased.

“That actually changed our business, that one image,” Holstein said. “You can’t pay for press like that.”

But you can react to it. Khaite posted the image on Instagram immediately, with shoppable links. The pieces sold out quickly on the brand’s website and from its wholesalers, so Khaite set up preorders, which also sold out. Traffic to Khaite’s website and Instagram jumped: the site’s number of visitors was up 400 percent year-over-year in September and the Instagram account received a record 300,000 hits in the days following the image’s release.

The spike in interest came just a week ahead of Khaite’s spring/summer 2020 runway show, after which the brand soon had new content to share with its new audience.

With celebrities such as Selena Gomez and Kerry Washington wearing Khaite to recent appearances, the brand has renewed momentum leading into its Autumn/Winter 2020 show on Tuesday, where the pressure will be on yet again.

“If you’re saying shows don’t work, then explain to me why Chanel, Vuitton and Valentino are doing six shows a year, and not two — clearly they work,” said Holstein, adding she predicts a global schedule of travelling shows will become a more widely adopted strategy in the future. “That’s not going to be just a bigger designer thing,” she said.

But for now, she said her home base is the most exciting place to be. “I'm proud to be showing in New York.”

Effective marketing is a challenge for every type of consumer brand, but especially emerging brands. In our recent in-depth case study, BoF decodes the strategies driving real results for eight young businesses, including Khaite. Created exclusively for BoF Professional members, case studies explore the most important challenges facing the industry today. Click below to read the case study now.