Eight days later, Leaving Neverland debuted at the Sundance Film Festival. In the four-hour, two-part documentary, Wade Robson and James Safechuck recounted in excruciating detail accusations that Jackson sexually abused them for years. The documentary aired on HBO on March 4 to wide acclaim and high ratings, amassing 3.67 million viewers for the first part in its first week, making it the third most-watched documentary in the last decade for HBO, according to Nielsen.

In a recent interview with The New Yorker, Abloh said he hadn’t heard about the documentary, but that he wanted to focus on “the Michael that I thought was universally accepted, the good side, his humanitarian self." In 2018, the 38-year-old architect-turned-designer who is also the creative director of the highly popular Off-White label, took creative control over Louis Vuitton’s menswear collections, becoming the French megabrand’s first black creative director. Abloh is famous for drawing on diverse influences pulled from his childhood and popular culture, and has waxed poetic about Jackson’s lasting influence on the fashion world (“the ultimate muse,” as Abloh described the singer to BoF’s Tim Blanks). 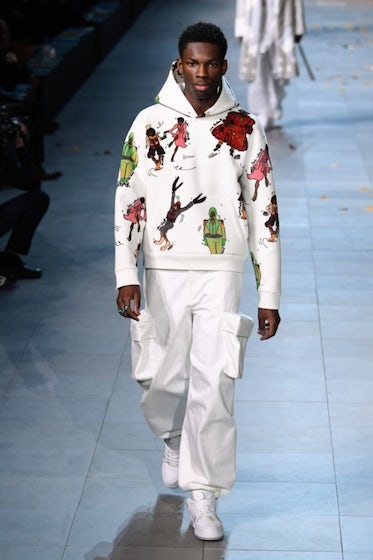 Meanwhile, Jackson’s family has accused Robson and Safechuck of lying, and the singer still has legions of defenders. But since the documentary aired, his already complicated legacy has become polarising. Radio stations in Canada have stopped playing his songs, while the musician Drake is no longer performing a song which heavily samples a Michael Jackson track on his UK tour. Elsewhere, the Los Angeles Lakers have dropped a Jackson song from their in-game entertainment line-up, and the Jackson estate has cancelled its run of a musical in Chicago themed around the artist’s greatest hits.

The question for Louis Vuitton is not what Abloh or the brand knew about Jackson or his alleged crimes, but rather: What do they do now?

There’s no exact science to when a public figure tips from controversial to radioactive. But if the renewed interest in the Jackson child abuse allegations crosses that threshold, the French house will have to address its latest collection’s proximity to the icon, or put its $28 billion brand at risk.

Louis Vuitton parent LVMH hired Abloh, and has poured millions of dollars into promoting his collections in order to build its biggest brand into a menswear powerhouse. But whether or not Abloh’s Jackson-inspired collection ends up being a dud (because products like the penny loafers T-shirt or the military-style jackets are more visibly Jackson-derived and are thus preemptively pulled from sale, or simply because they don’t resonate with shoppers) isn’t likely to be the primary financial concern for Louis Vuitton, as men’s ready-to-wear accounts for only a fraction of total revenue. What’s really at stake is the brand’s reputation — relatively untarnished for the time being, unlike luxury peers like Prada and Gucci which have fallen afoul of social media — at a time when consumers are quick to criticise perceived missteps.

So far, online chatter about the Jackson influence on Abloh’s collection has been muted. Social media watchdog Diet Prada has focused on calling out Abloh designs that appear to resemble others’ works. And the designer appears to have deep reservoirs of goodwill online, having avoided a sustained backlash for seating alleged repeated rapist Ian Connor front row at his debut LV Men’s show.

A Louis Vuitton spokesperson did not respond to The Business of Fashion’s request for comment. However, Abloh's words to The New Yorker offer one glimpse at the brand’s strategy as it pushes ahead with promoting his collection.

The worst case scenario is that Louis Vuitton is seen as indifferent to allegations of sexual abuse that have been known about Jackson for decades.

“The best case scenario for Louis Vuitton is that they are seen as pioneering an approach to handling celebrities with problems,” said Anne Hunter, executive vice president of strategy and growth at Kantar Consulting, a global consulting group with expertise in brand equity research. “They were able to celebrate Michael Jackson as an artist through his style, while not celebrating his actions as a person. The worst case scenario is that Louis Vuitton is seen as indifferent to allegations of sexual abuse that have been known about Jackson for decades.”

For as much as the Leaving Neverland documentary drudges up decades-old issues for the Jackson family, it also presents an opportunity for the youngest Millennials and Gen Z to familiarise themselves with the pop star, who released his last album in 2001.

The same, of course, can be said for Abloh’s Louis Vuitton collection, considering Abloh’s demonstrated ability to capture the attention of younger shoppers.

“I think with Virgil, he has the great ability to connect both with people of his own generation and to take our memories and elevate them to runways in Milan in Paris and so forth,” said Tanisha Ford, associate professor of Africana studies and history at the University of Delaware and author of "Dressed in Dreams: A Black Girl's Love Letter to the Power of Fashion." “There’s a way [Virgil] is making cultural history relevant for them in new ways, he’s using a cultural language that’s very much steeped in hip-hop culture to do that. And I think that that makes him an important bridge figure generationally.” 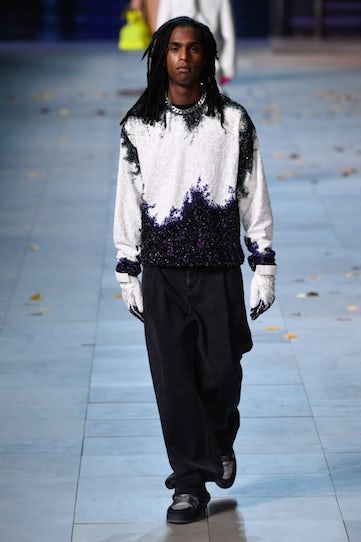 Abloh’s collection maintains some distance from Jackson. It’s not an official partnership and does not include a licensing agreement with the Jackson estate. The Louis Vuitton men’s Autumn/Winter 2019 collection doesn’t include images of Jackson’s likeness (unlike Abloh’s currently available SS19 Off-White capsule collection.) And the collection has other inspirations to fall back on. As Louis Vuitton’s website puts it, “although Michael Jackson was the show's foremost inspiration, Virgil Abloh's follow-up to his Spring-Summer rainbow-coloured début wove in recurring themes and a multitude of influences.”

The fate of the collection will largely be up to Louis Vuitton, which sells exclusively through its own stores and brand-operated concessions inside department stores.

“If the clothes stand on their own... they can still be a success,” Hunter said. “There may be less willingness for shoppers to want to wear clothing that signals an allegiance to the performer. A great, white, blousy shirt inspired by Jackson is desirable as a fashion item on its own and should still do well. A shirt with Michael Jackson’s image may not.”

Louis Vuitton may be safe to go ahead with whatever Jackson-themed rollout it was planning — from a commercial perspective, at least — because the documentary hasn’t quite bubbled up to the mainstream, Ford said. By contrast, Lifetime’s “Surviving R. Kelly,” which detailed allegations of sexual abuse by multiple women against the R&B singer, sparked weeks of intense backlash after it aired in January, fuelled by fresh charges brought by Chicago police. Jackson’s alleged victims have few legal recourses against the singer, who died in 2009.

“The fashion industry courts controversy and it relies upon Americans having a very short attention span,” Ford says. “[Designers] can do something that’s very provocative, or socially or politically charged, and we will be outraged about it for a week or two and it will generate the attention and sales and ad revenue they need, then everyone moves on. That’s the nature of that cycle.”

Still, luxury brands are increasingly finding there are limits to that “all publicity is good publicity” mentality. Gucci, Prada and Burberry have announced diversity initiatives this year to quell public outcry over products viewed as culturally insensitive.

In a statement on Thursday, Louis Vuitton said that it will no longer produce any of the pieces that directly reference Michael Jackson, and that at the time of Abloh’s AW19 show it was unaware of the Leaving Neverland documentary, which premiered just over a week later. Vuitton’s chairman and chief executive Michael Burke said, “We find the allegations in the documentary deeply troubling and disturbing,” and added that “child safety and welfare is of utmost importance to Louis Vuitton. We are fully committed to advocating this cause.” Abloh also released a statement Thursday saying, “I am aware that in light of this documentary the show has caused emotional reactions. I strictly condemn any form of child abuse, violence or infringement against any human rights.”